Managed in 2021-22 by Ross Speight and Michael Welch, assisted by Max Pouncey, Altrincham FC Reserves were re-formed in summer 2014 after the Club had not operated such a team since the end of 2006-07 season.

A 4-2 defeat away to Congleton Town Reserves in the Cheshire League on Saturday means that Altrincham Reserves have won just three of their fifteen league games this season.

They lie twelfth in the eighteen-team Premier Division just three points above the second-bottom club. Four of the six teams below them have games in hand, in some cases as many as five matches.

RESERVES BACK TO WINNING WAYS

After a run of defeats in October, Altrincham Reserves got back to winning ways with a 3-2 home win over FC St Helens in their Cheshire League fixture today.

So far in October, Altrincham FC Reserves have played twice but, unfortunately, have lost both fixtures.

On Saturday 9 October, they lost a high-scoring Cheshire FA Amateur Cup second round match 5-3 away to Cheadle Heath Nomads Reserves.

The substitutes were Dionicio Bohe, Matthew Sumner and Lewis Waller, whilst the scorers were Cookson, Taylor and Sumner.

The following week, on 16 October, Alty Reserves lost in another eventful game, this time of five goals. Away at neighbours Broadheath Central on Salisbury Road, the hosts won 3-2.

On the bench were Scott Johnston, Ali Khral and Logan Taylor.

During the interview with Brian Flynn, Ross talks about his career in football to date, including academy coaching experience at Wigan Athletic and Tranmere Rovers, alongside spells as manager of Middlewich Town and Lostock Gralam.

Ross also discusses his brief at The J.Davidson Stadium in terms of facilitating the player pathway to the first team".

Today, Altrincham Reserves beat Middlewich 3-2, thanks to goals by Billingsley, Brown and Taylor. Taylor's goal was a late winner for the hosts. 19 September 2021

With the Altrincham first team having no fixture on Saturday due to a positive Covid test, ALtrincham Reserves, nevertheless, did have a fixture. Away at Eagle Sports, who hail from Great Sankey, Warrington, they drew 0-0 in a Cheshire League match. 12 September 2021

Alty now lie fifteenth in the eighteen-strong Cheshire League. They have won just one of their eight games so far in the league.

Altrincham FC Reserves won 1-0 away at Nantwich Town on Saturday.

This was a Cheshire County FA Amateur Cup 1st Round match.

Altrincham FC Reserves have played three Cheshire League matches over the past ten days, winning one, drawing one and losing one.

They beat Daten 4-0 at home, drew 1-1 at Whaley Bridge and lost 2-1 at their landlords' ground, at Egerton Sports Club.

After seven fixtures they have won just once this season and lie fourteenth in the eighteen-strong divisuon.

Following two draws in their opening fixtures of 2021-22 in the Cheshire League, Altrincham FC Reserves suffered two defeats in the past week.

On Tuesday night, they lost 1-2 at home (Egerton Sports Club) after, last Saturday, they had suffered a 3-1 reverse at Garswood Town.

The results leave Alty Reserves fifteenth in the eighteen-strong division and still seeking a first win this season.

Their second fixture on 10 August also finished level, in this case 1-1 at Poynton, where Niall Butchart was the scorer.

Altrincham FC Reserves have tweeted that there is a "New Reserve Management Team. Ross Speight and Michael Welch join the Robins and current reserve player Max Pouncey will be assisting manager Ross Speight. 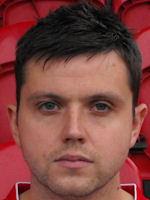 We are looking forward to completing in the Cheshire Football League with a young exciting squad".

In July the Winsford & Middlewich Guardian reported that "Management changes have taken place at Middlewich Town FC... The move comes after Ross Speight and Michael Welch decided to step down from their positions after six years at Seddon Street...

Speight has explained why he and Welch have called time on their roles with The Witches. 'Both of us have found it increasingly difficult to commit the time required to run the first team due to work and family commitments,' he said. 'We have enjoyed success at the club, with promotion to the Premier Division in 2018 as well as reaching three cup finals'".

Supporters may recall Michael Welch (left) as a former Alty defender. Now 39, Michael signed on loan at Alty for a month from Northwich Victoria on 20 February 2009; this was later extended till the end of the 2008-09 season.

He scored on his full debut for Altrincham against Weymouth on 14 March 2009. Having scored in his first two league starts for Alty, including a 70-yard freekick against Crawley, which won the Setanta Goal of the Season award, Michael was sadly sidelined with ankle ligament damage towards the end of the campaign and underwent an operation which kept him out at the start of the new season. Michael returned to action at Stevenage on 26 September 2009 but made only three starts before the end of the campaign. 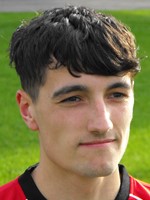 Max Pouncey (right) is a graduate of the Altrincham Youth and Reserve teams whose five-goal haul in Altrincham's FA Youth Cup match against Nostell Miners' Welfare in October 2013 underlined his goalscoring potential. Already a Cheshire County FA player, Max signed first-team forms at the end of October 2013. He went on loan to Prescot Cables on 16 December 2013 but returned in time to make his first-team debut in the Cheshire Senior Cup in March 2014.

In summer 2014 he joined the first-team squad for pre-season training and was assigned a squad number. In August 2014 he went on loan to Abbey Hey and subsequently left the club only to return as a regulkar for the Reserves.

Altrincham's National League season has ended but the club's Reserves play on.

Spectators are welcome and it would be great to get a good turnout of Alty fans for this important finale to the season".

In the shoot out "Marc Bellingham, George Howarth, Max Pouncey, Raheem Mercurius and Dre Taylor all scored for the Robins whilst Joel Torrance heroically saved Broadheath Central's fifth penalty to secure a place in the final".

AWAY WIN FOR RESERVES

In the J B Parker Premier Division Challenge Cup on Saturday, Altrincham won 4-1 away against Lostock Gralam. Bellingham (2), Pouncey and AN Other were the scorers.

The Winsford Guardian reports that "Ross Speight is calling for his Middlewich Town side to 'finish the job' when they head to Egerton to face Altrincham FC Reserves on Saturday.

The Witches climbed into top spot in their Cheshire League JB Parker Premier Division Challenge Cup group with a 2-0 success in Warrington against Greenalls Padgate St Oswalds at the weekend, despite playing for 55 minutes with 10 men.

But with the group league table a tight one, Middlewich need to deliver another strong performance to boost their chances of progressing to the knockout stage.

They potentially need at least a draw to finish top of the group, depending on how second-placed Broadheath fare against bottom side Greenalls.

Middlewich lost 1-0 at home to Altrincham when the sides first met in the competition on April 17.

Sam Wakefield's double strike in the latest victory against Greenalls means they can go to Alty in good mood though...

Said Speight, 'We’ve worked hard on and off the pitch as a group and we need to finish the job next week with another win at Altrincham.'"

In Saturday's match Altrincham lost 2-0 at Salisbury Fields, away to neighbours Broadheath Central, in their latest group-stage match in the J B Parker Premier Division Challenge Cup. 24 April 2021

Three of the Altrincham goals came from substitutes, namely Pouncey, Howarth and Lewis, whilst Miller was the other scorer.

The starting eleven showed one change as Mercurius replaced Howarth.

ALTY RESERVES BACK IN ACTION

As reported below the Cheshire League has decided to try and complete its season though its website has indicated that their top division, in which Alty Reserves play, has suspended its season, whilst its lower levels are continuing.

However, last Saturday, in a a J B Parker Premier Division Challenge Cup match, the Altrincham Reserves drew 2-2 at home (Egerton Sports Club) to Broadheath Central FC. Substitute Marc Bellingham netted one of the goals.

This was not a knockout match but rather a group stage game (see below).

ALthough the league season for Altrincham Reserves has not recommenced, the Cheshire League's J B Parker Premier Division Challenge Cup is being staged.

As indicated above Alty played their first game last Saturday. The subsequent fixtures are:

Last weekend the Cheshire League "restarted and will attempt to fit in more than 400 matches before the end of June" reports the NL Paper.

"None of its teams have turned out since Christmas but almost eberyone voted... to play competitively again".

However, "The campaign for teams in its top flight... has been curtailed". That is the Premier Division in which Altrincham Reserves compete.

"Meanwhile, the rest, split across four divisions, will play their remaining league games with promotion one of the prizes on offer".

However, "there will be no relegation from either of the top two sections. Two teams from the third tier (Step 9) will be promoted, creating space to accommodate eight new clubs that want to join for the 2021-22 term... The teams must complete 60% of their league programme before a PPG calculation can be used to decide the final standings".

SEASON ENDS WITH A DRAW

On 12 December, Atrincham Reserves' season ground to a Covid-induced halt with a 3-3 draw at home against Winstanley Warriors.

All three Alty goals were netted by Max Pouncey.

On 5 December, Alty played the return fixture with Broadheath Central, both games being played at Central's venue.

This time the match ended one apiece with Mongan scoring for Altrincham.

On 31 October Alty crashed to a 5-2 defeat away to Winstanley Warriors. Jordan Coates netted all five for the hosts.

WIN TO START THE CAMPAIGN

Altrincham Reserves kicked off their 2020-21 season in the Cheshire League with a 4-0 win at home (Egerton Youth Club) over Middlewich Town on Saturday last (3 October).

However, COVID issues have caused this Saturday's away match at Billinge to be postponed.