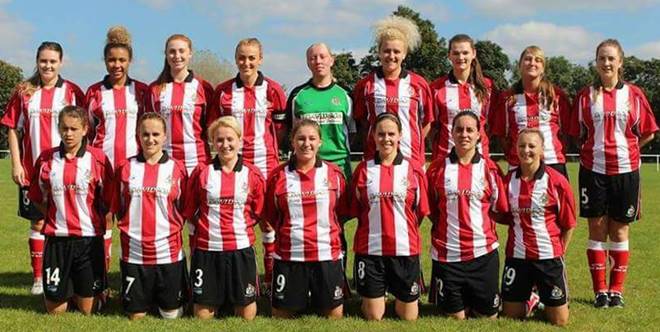 The venue for home matches in 2020-21 is expected to be Egerton Sports Club, Mereheath Lane, Knutsford WA16 6SL. Matches are normally played on Sundays, k.o. 2pm. Spectators are welcome at all games. For details of matches and times, please see the fixtures list below. CHECK BEFORE TRAVELLING!

There is a separate website for the Altrincham FC Juniors and social activities.

Altrincham Women FC, as the former Altrincham FC Ladies are now named, "announce that Aimee Hopkinson has been appointed Captain...

Aimee, a defender, is a strong leader...

Altrincham Women followed up last week's 2-0 victory against Northwich Vixens with a 4-3 win on Sunday against Runcorn based Brookvale United Ladies.

The game was played on a 3G pitch in Warrington".

Altrincham FC has Brian Flynn's report that "Altrincham FC Women returned to training on the last day of March and were straight into action at the weekend with a behind closed doors friendly against Chester FC Women on Easter Sunday.

Honours were even in a 6 goal thriller at Chester's impressive 1885 Arena.

The Robins led 1-0 & 2-1 but were pegged back on each occasion and it looked as if the home side woukld be the victors when they went into the lead for the first time to make it 3-2 but a last gasp equaliser secured a result for new manager, Nick Pearce, who was taking charge of his first game since being appointed in January.

The Women are next in action on Sunday in a behind closed doors fixture against Northwich Vixens at Egerton FC, Knutsford, which will be Altrincham FC Women's home venue this season".

Footnote: The team now seems to have been renamed Altrincham FC Women, although their twitter account is called Altrincham Women FC and the Cheshire League website still has them as Altrincham FC Ladies!

Altrincham FC Ladies were the only team in the North West Women's Regional League Division One South not to have played a game in the 20202-21 season before the end of competitive football brought about by Covid.

The other teams played up to six matches before the final fixtures were played on 20 December 2020.

Altrincham FC Ladies are scheduled to kick off their league season on Sunday (11th) at Egerton Sports Club, at home to Curzon Ashton (2pm). 20 September 2020

In the first match at the J. Davidson Stadium since lockdown to permit the limited attendance of spectators, Altrincham FC Ladies were knocked out of the Vitality Women’s FA Cup at the Preliminary Round by Northwich Vixens. They lost 0-5.