The NL Paper reports that "Michael Twiss says that signing for Altrincham is the perfect solution for him to go back to school. The ex-Morecambe striker was looking for a part-time club so he could balance training two nights a week with a full-time property and construction course... 'I'm looking to got to college for a few years so obviously I needed to work around that and go back to part-time football' said Twiss who has penned a two-year deal at Moss Lane. 'I still want to be playing football but I've got to look at what I'm going to be doing for the next 30-35 years... The manager at Altrincham had me in mind anyway so it's come together nicely and I'm looking forward to it. The main thing is to get a full season and enjoy it'... Twiss says the play offs aren't out of reach. He said, 'It's obviously harder work when you are part time but I suppose then you are looked upon as an underdog, so it's a challenge'". 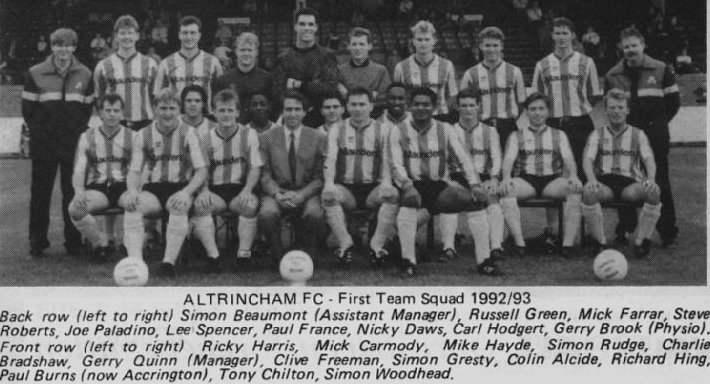 The Huddersfield Examiner reports that "Local footballers throughout Huddersfield and beyond are mourning Charlie Bradshaw after his death at 43. Best known for his exploits with Altrincham, Emley (in three separate spells), Bradley Rangers, Brackenhall United and Sikh Temple, the versatile player had been suffering from lung problems.

Bradshaw, a former Newsome High School pupil, was on the verge of being signed by Tottenham Hotspur in September 1992, with the Premier League giants offering Altrincham a £100,000 package, only to withdraw it after a mix-up over his age. Later that season he was a star performer when Altrincham toppled then-Football League club Chester City in the first round of the FA Cup.

Altrincham FC sends its condolences to Charlie's family after his untimely death.

They have only just finished the 2009-10 season, but Altrincham FC Youth have already planned two pre-season friendlies. After a trial match on 27 June, from which manager George Heslop will start to reshape his squad - a major task, given that most of his players from last season are now over-age for the under-18s' North West Youth Alliance Premier Division in 2010-11, two pre-season games have been arranged: