WE MAY BE ON TELEVISION

In three attempts, two away and one at home, Altrincham have yet to take a point off their visitors this Saturday, Histon. Last season the Cambridgeshire side came to Moss Lane and won 2-1, aided by a woeful back -pass from Carlos Logan which set up the winning goal. Chris Lane netted Altrincham's goal after Histon had taken the lead through Akurang, despite appeals by the Robins for offside. Earlier this season, Alty lost 1-0 away at Histon.

Altrincham dropped a place last night courtesy of Salisbury's win so start the game in 14th, whereas Histon lie 4th, with a game in hand. Nevertheless, Altrincham share third place in the current BSP form guide with their opponents, Histon, both having gleaned 13 points from their last six matches.

The Saturday Yankee is a vital fundraiser for Altrincham FC, so please do consider joining up if you possibly can. Follow the above link for details. The details of this week's competition and last week's results are here. 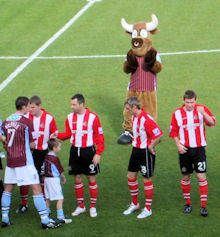 SAM says that "Alty's eight-game unbeaten run came to an end on Saturday as they were beaten 2-0 at Weymouth" SAM says that Alty produced "a surprisingly lacklustre 90 minutes. Weymouth were in control from the start, with experienced duo Chris McPhee and Ryan Williams pulling the strings in midfield... Alty finally woke up and were unlucky not to equalise just three minutes later when Greg Young’s header from former Weymouth man Lee Elam’s corner thumped off the underside of the bar... On the stroke of half time, Little disappointingly blasted over from six yards after getting on the end of a good cross from Elam".

Right: Alty are stalked by Weymouth's mascot as they shake hands with their opponents at the Wessex Stadium last Saturday.

News of a summer trialist at Moss Lane comes from This is Staffs which says that Leek Town's "new skipper Jake Moult has aroused the interest of Stafford Rangers, who have put in seven days' notice of approach. Moult, formerly with Port Vale, has impressed since being signed from Plymouth in the summer and has now been offered a contract by Leek".

Barry Shuttleworth missed a penalty for Clitheroe at the weekend, but his side won at Bradford P.A..

NO SHIELDING THE STAR PLAYERS