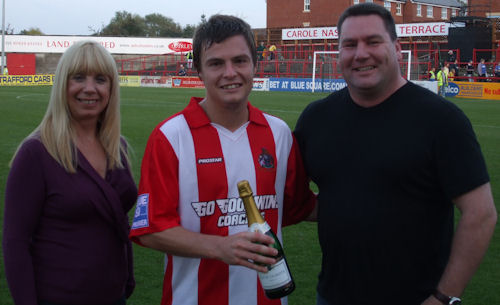 The great run of results continued this afternoon for Altrincham as they secured their first-ever win over Oxford United and their fifth win in six league games to move to the heady heights of ninth in the Blue Square Premier table. The deciding goal, his 99th for the club and fourth in successive games, came from Colin Little after 64 minutes. He drove the ball home from 12 yards at the end of a ten-pass move which culminated in Elam's cross from the right by-line which evaded a defender, leaving Alty's marksman with a clear shot at the target. After that, Altrincham rarely looked like conceding and with substitute Johnson causing Oxford problems, they might even have added to their single goal. Anthony Danylyk (pictured right, receiving his award) was a deserved Alty Man of the Match. A good crowd of 1,806 and a sunny afternoon made it a great time to be an Altrincham fan.