Oporto (Porto) is Portugal's second city. On 15 May, 1872, the Companhia Carril Americano do Porto a Foz e Matosinhos (CCAPFM) opened a mule-drawn tram line, to 1.435 metre gauge, from Infante on the city's river front downstream to Matosinhos. This later became route 1 of the subsequent STCP system, part of which still operates today. However, Oporto's tram system has fared worse over the years than that of Lisbon in that it has been reduced to a couple of short routes which are as much of museum status as working tramways for the use of the local population. However, the last few years have seen the arrival of the impressive Metro system which has catapulted the city's railed transport system into the 21st century.

By March 1873, the original mule-tram route had been extended into the city centre at the Rua da Restauraçăo and at the other end, of its route had reached Leça da Palmeira. Also in 1873, another tram company, Companhia Carris de Ferro do Porto (CCFP) was established and from 12 August 1874 it ran a standard gauge route from Carmo in the city centre to Foz (which is on the way to Matosinhos) via Boavista. This company soon had five routes operating with destinations which included the main Oporto railway station at Campanhă. The CCFP used 10 Starbuck mule-hauled vehicles purchased from Birkenhead, in England. One of these was a double deck vehicle.

From June 1878 both CCAPFM and CCFP were able to use steam power, using seven locomotives (mostly Henschels) on joint services to Boavista from where mule haulage took over. Finally, in January 1893, CCAPFM and CCFP merged, with the latter's name being used for the combined operation. The first electric service started on 12 September 1895 from Carmo to the Rua do Ouro via Massarelos and this was the first electric system in Iberia. The route was then extended from Massarelos to Infante and employed Cologne-built four-wheel vehicles by Herbrand. Mule haulage ceased in 1904 but steam operation lasted till November 1914.

A new tramway company was set up in competition in 1907 and this was called the Companhia de Viaçăo do Porto (CVP) but it was taken over by CCFP a year later. A 75-year concession was granted by the city council to the CCFP in 1906 and routes grew as a result of this arrangement, including services across the Ponte D. Luís to Vila Nova de Gaia. In 1912-13 a reserved track was created to Castelo do Queijo from Boavista to replace the steam tramway. Non-passenger trams also operated carrying coal and sardines, as well as freight to the port of Leixőes.

The original Herbrand electric fleet was initially increased in 1903 by conversion of redundant mule cars using Brill 21E and German trucks. But, from 1905, new purpose-built electric cars were imported from Brill in the USA. From the 1920s the CCFP company itself built its own cars at Boavista using imported materials from Brill in the USA.

The Oporto city council exercised an option to take over the tramway operations from 1946 and the operator since than has been known as the S.T.C.P. (Sociedade de Transportes Colectivos do Porto), whose web site is an excellent resource for the visitor. In the 1950s the tram fleet stood at 193 motor vehicles and 24 trailers and the network extended over almost 250km. But from 1959 the network was reduced following the development of bus and trolley bus services. Motor buses had been operated since April 1948 when Daimler single deckers were introduced. And also in 1948 it was decided to introduce trolley buses.

In 1958-59, 20 new BUT trolleybuses, with Metrovick motors, were acquired. These were 32-seater single deckers built in Portugal by UTIC. Further tram routes were converted to trolleybus in the 1960s and six more trolleybuses were bought.

A further curb to tram operations was the inauguration of a lifting bridge over the river at Leixőes which meant that the trams from Oporto had to terminate at Matosinhos. The link from Matosinhos to Leça was subsequently operated by double deck AEC buses which were later replaced by Leyland Atlanteans. The STCP bus livery, which like that of thst trams, had been ochre was altered in 1960 to turquoise and later orange and cream. In 1967-68 the acquisition of 50 double-decker and 25 single-decker Lancia/CGE trolleybuses dealt a further blow to tramway operations. By 1978 only routes 1,3,18 and 19 remained in tram operation and, by 1992, only 33 trams survived of which just 19 were in daily use. By 2004 usually only three or four trams were normally in use at any one time on truncated routes.

For more on Oporto's trolleybuses, see:

Before 1930 the STCP livery was green and white but since then it has been golden ochre and cream.

Known as Brill cars, these were not actually bulit by that company but were of a similar type to the US manufacturer's product. They were of 7-bay construction with a mix of longitudinal and transverse seats.

These cars were built at Preston in England by the United Electric Car Company in 1909 with Mountain & Gibson 21EM trucks.

These were genuine Brill-designed vehicles. They were four-wheelers with windows, sliding into a barrel-roof vault. 120-136 were ordered in 1909, the rest in 1910.

This was the first Oporto bogie car produced by Brill in 1904. It was similar, but heavier, than Lisbon's Brill class vehicles (nos 323-342)of 1906. This tram is now at the Shade Gap Electric Railway at Rockhill Furnace, Penn., USA.

These were semi-convertible cars built by STCP in 1928-29 with 8 bays. These cars allowed larger passenger capacity with their length being 9.85 metres. 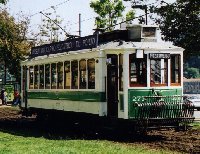 Tram 277 in revenue-earning service at Massarelos in July 2001.

Four-wheelers, uilt in 1947-51 by STCP on local trucks with flush sides and single ended operation. Their name of Classroom Cars came from their withdrawal for use as rural classrooms in Portuguese villages. Length 9.84m, width 2.4 m and weight 11.53 tonnes.

Similar to 350 class, but these cars had only 5 bay bodies and were originally designed as trailers. Length 8.22 metres on a 2.36 wheelbase.

These were vehicles from the former mule-fleet. No.9 is preserved at Crich, England.

Built in 1934 these were Fumista trailers.

Former mule cars, these were motorised in 1903 but converted to trailers from 1934.