NB The Metro do Porto's own website has further information on the system. 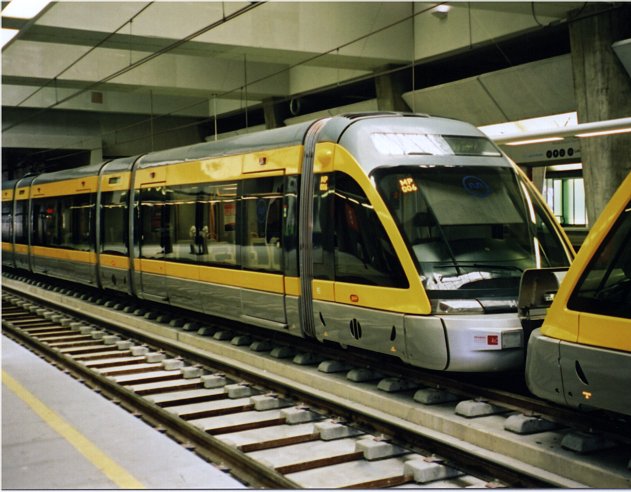 Above: Metro do Porto coupled units in operation during summer 2005.

The Metro has transformed Oporto's local transport since December 2002 when commercial services started. It replaced a local narrow gauge system based on Trindade station in central Oporto as well as some of the routes formerly operated by the STCP trolleybus system. In addition, new lines have been created and many more stations added to pre-existing routes.

There are currently six Metro lines (2011), which are described, briefly, below. The system currently comprises 80 stations (14 underground) and the line length is 67km (2011). In 2010, 54 million ticket validations were recorded on the network and in the first 6 months of 2011, 29 million passengers used the network. Line E in particular grew in that half-year - usage being up by 29%. The new Linha Laranja (F), opened on 2 January 2011 towards Gondomar accounted for 627,000 users.

The Oporto Metro system is operated by ViaPorto (an previously by Transdev) under the brand of Metro do Porto S.A., a body in which the local regional council and STCP (Sociedade de Transportes Colectivos do Porto), which operates the city's bus system, both have an interest. The Metro's shares were originally 70% owned by the local metropolitan authorities, with STCP (Sociedade de Transportes Colectivos do Porto) holding 25%. STCP operates the city's bus fleet. The remaining 5% of Metro do Porto is owned by the national railway operator, CP (Combůios de Portugal). However, from 1 April 2010 the operating contract was awarded to ViaPORTO, a group led by Portuguese transport company Barraqueiro, which also operates the Fertagus railway line in Lisbon and the MST metro in Almada (see links above).

By 2011 there were six Metro lines, all of which run roughly north to south, though one of them, the Yellow Line D, bisects the other four at the two-level Trindade station in the city centre. By 2008 the network was 59km in length of which 7km was in tunnel. The tunnels include a 4km stretch under the centre on Line D, whilst a 2.35km tunnel links Trindade in the city to Campanh„ main-line station in the outskirts. At the other end of the scale, Line D soars high above the River Douro on the magnificent Ponte D. LuŪs of 1886 (see below).

Right: Two trams at Půvoa, 2 October 2007, picture courtesy of Tim Fenton. The car on the left has just arrived with an Express service and will return on an all stops, while the one on the right has brought in a stopper and is preparing to leave on an Express.