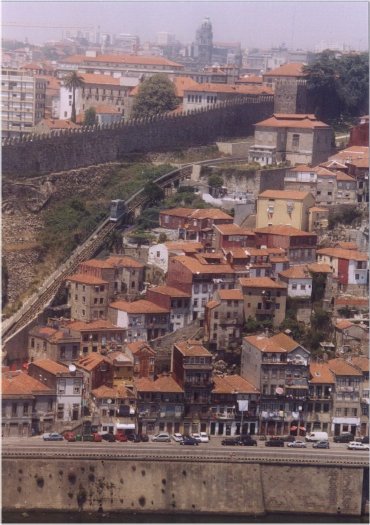 Above: The Oporto funicular in summer 2004, picture courtesy of Tony Morehead.

Opened on 19 February 2004, the Funicular dos Guindais runs from the Oporto river side (Ribeira) next to the lower level of the Ponte D. LuĒs to the Batalha area. It replaced a nineteenth-century funicular which was closed after only a short period of operation. It runs for 281 metres and the journey takes almost three minutes. 90 metres of the route are in tunnel and the height climbed is 61 metres. Its two vehicles can carry up to 25 passengers each. The bottom station is called Vale (Avenida Gustavo Eiffel) and the top Montanha (Rua Augusto Rosa) and is operated by the Metro do Porto company. It operates from Tuesdays to Sundays from 0800 to 1900 (summer 2004).

Above: A view of the Rua Augusto Rosa, the top of the funicular, in summer 2005. To reach street level, a short lift journey carries passengers from the end of the funicular line, to emerge alongside the new lines laid for the Oporto Metro.

This panoramic elevator runs from the Largo da Lada, and is visible behind the buildings of the Ribeira, close to the Ponte D. LuĒs. It is part of the so-called "Conjunto da Lada" a redevelopment project carried out in the late 1980s and early 1990s.

Contact: the following is not a link; please transcribe the address into your email