Above are front and back pictures of the two main candidates for next year's Altrincham FC home shirt, as supplied by Ian Senior's SK Kits. If you have any views on which should be chosen, please e-mail the Club.

There must be something in the water at Moss Lane as, just weeks after Anthony Danylyk became a father, so too has Mark Beesley, whose wife gave birth to a son, Rhys, on Friday night. All at the Club send Mark and his wife their best wishes. Mark is now fit again after a recent injury.

Alty defender Rob Wiliams pronounced himself "gutted" at missing his first Alty league match of the season on Tuesday against Southport. The Wales under-23 international took the sensible decision to sit out the game after experiencing a groin strain at Darlington last week. He and physio Sean Riley are confident that Rob will be fit for this Saturday's game and beyond, whereas had he played last night he could have risked putting himself on the sidelines for some time.

23 year-old Rob, who joined Alty in July 2009, had started all 39 league games before Tuesday's match which, coincidentally, would have pitted him against namesake Robbie Williams of Southport. Rob has now made 89(+6) appearances in all competitions for Altrincham. Should he play in five more games this season, he will achieve 100 appearnces for Alty.

The half-time TASC bucket collection during the game against Southport raised £65.15. Thank you to all the donors and collectors for their contributions.

The Sale & Altrincham Messenger reports how the game on Tuesday "lifted Altrincham out of the relegation places for the first time in seven months. But it had looked as if it would be the Robins' fourth successive win before midfielder Anthony Danylyk got himself sent off in the 53rd minute".

SAM adds that the result "still left manager Ken McKenna reflecting on what might have been at Moss Lane on Tuesday night. Ahead, through a first-half Damian Reeves penalty, Alty lost midfielder Anthony Danylyk to a second yellow card and were then pegged back by a Southport equaliser in a 1-1 draw...

With Cambridge United next up at Moss Lane on Saturday, though, McKenna sensed a missed opportunity and also made it clear he shared the home crowd’s dismay at some baffling refereeing decisions.

'I might wake up in the morning and think it was a decent point, but at the moment I am very frustrated', he said, shortly after the final whistle. 'We could have been in a position to try and overtake Cambridge on Saturday, and, in all truth, we should have been. We dominated after scoring and should have been on for a comfortable win. But we just froze for that one split-second that mattered, and they tucked away an equaliser. It was a case of regaining our composure after that, but I thought we did it superbly and looked a real threat again. I never publicly criticise referees, and I’m not going to get involved now, but there was a feeling of being let down a bit by some things that were out of our control'".

From the other side, Southport report that "Tony McMillan has produced some fine saves over the course of the season, but few may prove to be as valuable as the one he made in the closing stages at Moss Lane on Tuesday night...

As a scrappy game reached a frantic conclusion, McMillan pulled off the best in a series of saves with just five minutes remaining. Nicky Clee had been a threat to Southport all night, and having seized on a mistake from Robbie Williams, the Altrincham striker looked sure to score as he closed in on goal, only for McMillan to save the visitors a point with a splendid stop to his right.

After overruning Southport for much of the opening half, Altrincham could easily have held more than a one-goal advantage at the interval. But the dismissal of Anthony Danylyk shortly after the break lit the touch paper for an incident-packed second period, with the endeavour from both sides making up for any shortage of quality.

Southport had lost their previous six league visits to Moss Lane, but a good result this time was not without cost. While Chris Lever now faces a suspension for his 73rd minute red card after being judged to have struck Clee with an elbow, the Sandgrounders will also await news on Kevin Lee and Aaron Turner, who both withdrew through injury.

Although the opening stages were relatively even, Altrincham posed the greater threat... The home side... proceeded to take control and Johnson twice came close again before half-time"...

"Liam Watson will view the match DVD before deciding whether to appeal Chris Lever's straight red card, Watson has also asked the match official to review the dismissal".

Last Saturday's match at Darlington was James Smith's 100th start for Altrincham and his 101st appearance in all for the Club. 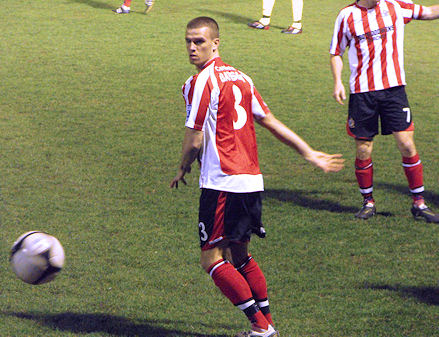 Left: Jon Bateson, Alty's loan defender from Accrington Stanley, came on as a sub for the injured James Smith on Tuesday night. James tweaked his hamstring but has not pulled it. To date, there is still no news from the FA on the disciplinary charges against James, arising from the Kidderminster game nearly seven weeks ago.

... AND DALE AND RYAN'S HALF-CENTURIES

The match against Southport was Dale Johnson's 50th start for Altrincham; he has also made 22 appearances from the bench for the Club. In the recent match against FGR, Ryan Brown made his 50th appearance for the club.

The Club's thanks and congratulations go to both James Smith, Ryan and Dale.

From the Football Conference we read that "York City's accounts for the year ended 30th June 2010 have now been published. The club had a successful season on the pitch, reaching both the play-off final at Wembley and the Third Round of the FA Cup, with an away tie at Stoke City. This continued the success of the previous season in reaching the FA Trophy final at Wembley.

In view of the additional income received in the 2008/09 season by reaching the FA Trophy final, the Board took the view that this should be re-invested in the playing squad for the 2009/10 season...

Overall in 2009/10 the level of turnover was almost identical to that in the previous season at £1.69m, though gate receipts did increase. Ground repair costs during the 2009/10 season more than doubled from the previous year and rents and rates also increased, highlighting the club’s desperate need to move to a new community stadium. There was an increase in transfer fees paid following the addition of Michael Gash to the squad.

The Board acknowledges that losses of this level are unsustainable in the long term and this again highlights the need for the Club to move to a new ground where additional sources of income and reduced maintenance costs of an aging stadium will assist the Club in maintaining its desire for promotion back to the Football League.

Chairman Jason McGill said: 'In order to break even at York City we would have to more than half our playing budget. From 2008/09 season, you can see that this reduced budget level does not give us the resources to compete in the Conference and would potentially lead to adopting part-time status. This is not something the Board believes our supporters want and we therefore continue to operate a playing budget that has the potential of generating on-pitch success...

The financial accounts for the year ended 30th June 2011 are expected to show a significant loss again, however, they are in line with the budget set at the start of the season and will be reviewed again during the close season to ensure that the club is operating at a level which takes into account the resources available to it".

From Blue Square Football there is confirmation that "Grimsby Town have recalled defender Scott Garner from his loan spell at Alfreton Town due to a lengthy injury list. The Mariners' new management team of Rob Scott and Paul Hurst are currently without four first-team defenders, forcing a recall for Garner.

Peter Bore has been sidelined by a recurring groin problem, joining Darran Kempson and Steven Watt (both hamstring) and Lee Ridley (calf) on the treatment table.". 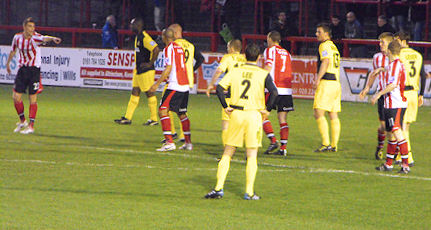 In an incident-packed match, the dismissal of Anthony Danylyk, with Alty leading 1-0 was crucial to the outcome. Port had started the game the better but Alty took the lead with a penalty. Referee Joyce told Alty press officer Brian Flynn at the interval that he gave the penalty for Davis's foul on Joseph but added that he would also have given a spot-kick for the felling of Johnson by Marsh-Evans a split second later. Damian Reeves netted from the spot in the 19th minute.

Danylyk, who had been booked for verbals in the first half then tackled from behind a Port player, who was posing no danger way out on the touchline, and the inevitable outcome was a second yellow and a red. Five minutes later Daly equalized for Southport. Despite Clee hitting the post and forcing a fine save from McMillan, and Joseph having a headed goal disallowed, Alty could not find the winner. Mr Joyce once again left Moss Lane to a chorus of boos from the Alty fans and a tirade from the Southport manager after a number of baffling decisions. The point lifts Alty out of the bottom four for the first time since August. Match report here.