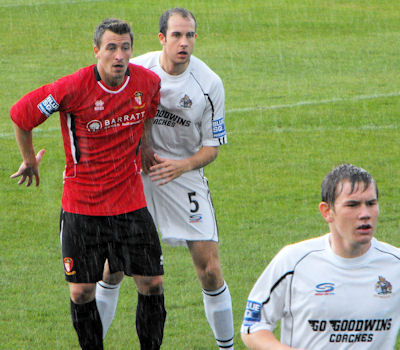 In the Non-League Paper, Hayes manager Garry Haylock says of defeat by Altrincham, "It depends on how you want to play your football. I don't want to play football the way they play football. We're not set up to play like that but we've got to be able to cope with it and I don't think we did".

Alty manager Ken McKenna said of Alty's winless run away from home prior to this game, "The longer it goes, the more of a problem it becomes so it was great to get that out of the way today. We had lots of chances. We just couldn't score. We thought it was going to be a frustrating 0-0. Luckily we got the penalty in the end".

Blue Square Football says that "Defender Ollie Rowe has left Eastbourne Borough and dropped a division to join Chelmsford City. The versatile 19-year-old had impressed... while on loan at divisional rivals Lewes".

And "Luton Town have revealed that veteran striker Kevin Gallen has joined League Two outfit Barnet on a loan deal that will run until January 8. The 35-year-old has found his first-team chances limited at Kenilworth Road this season and Hatters' boss Richard Money has given permission for the striker to join the Bees in order to gain some valuable game time.

Gallen told Barnet's official website: 'This came out of the blue with a phone call on Thursday evening. I started the season in the Luton team but I need to be playing football and Barnet are giving me that opportunity'".

According to NL Daily "Trafford have brought in three new players over the past few days. [Ex-Alty man] Jamie Baguley joins from league rivals and neighbours Salford City. A tricky winger with an explosive shot, Baguley was particularly dangerous from set-pieces. He enjoyed a successful spell with Salford a few years back before departing for FC United of Manchester during the 2007/08 season... before moving on to Leigh Genesis, re-signing for the Ammies in September 2010, along with brother Chris".

Three ex-Alty players were in FC United's win over Barrow in the FA Cup on Sunday; they were goalscorer Carlos Roca, Karl Munroe and Ben Deegan. In the Manchester Evening News, FCUM manager Karl Marginson said, "Players like mine put on the red shirt for one reason and that's not money. They could play elsewhere for an extra £30 a week - that's what it is at this level - but they love playing for the club". Meanwhile the MEN says that "loan sales advisor... wideman Roca, who started out at Oldham Athletic, said he would be back at work tomorrow in Wilmslow despite being the centre of media attention after the game". Roca added, "It's the most important goal of my career".

Right: Altrincham & District FA (in yellow) line up a defensive wall made up of (l. to r.) Reece Bailey, Matthew Fearon, Sam Grimshaw and Ansima Matabaro.