Oxford United announced today (Sunday) that they had "parted company with manager Darren Patterson after a meeting with Chairman Kelvin Thomas. Kelvin said: 'Darren is a very honest, hard working young manager who has given everything he had to the role. However, we feel that a change of manager and a change of direction is needed at this time'... Jim Smith will step in as caretaker manager in the short term alongside first team coach Mickey Lewis. The pair will take training tomorrow and be in charge of the side at Mansfield on Thursday. A full application and interview process will be conducted to find a permanent manager".

CHRISTMAS IS EARLY THIS YEAR

Saturday night witnessed the Altrincham FC Christmas Party at the Cresta Court Hotel. Master of Ceremonies, Graham Heathcote, was in fine form despite the 0-4 reverse earlier in the day and virtually the entire squad was present at the evening event. Most of the players were the subject of the manager's jokes at some point in the evening. Those supporters and sponsors who attended were treated to a rendition of a Christmas carol by the players - and then there was Alex Meechan's unforgettable Michael Crawford impersonation!

Tom Cahill, a loanee from Rotherham Utd to Alty has had his loan at Ilkeston Town extended. James Olsen, released by Burscough last week has joined Gary Scott, Rod Thornley, Mark Drew and Lee Thompson as ex-Robins at Witton Albion.

Paul Ellender (Alfreton Town) and goalkeeper Dean Greygoose (Bury Town) met again on Saturday as their clubs met in the FA Cup, with the Midlanders winning 4-2. Neither of the ex-Alty team-mates got off the bench, however. In contrast, Ian Craney scored again for Huddersfield Town. Ex-Alty players on the move include Chris Downey, from Flixton to AFC Fylde, former Youth and reserve team player Paul Monaghan, to Abbey Hey, and the much travelled striker, Anthony Hargreaves, to Bacup Borough. Fromer Alty reserves' manager Neil Brown guided his team Abbey Hey, including numerous ex-Moss Laners to a 3-2 away win at Ashton Athletic in the Vodkat League Cup Second Round.

Striker Josh Mitten scored twice for Flixton on Saturday and Lee Thompson netted for Witton who lost again, 4-2 at Ossett Albion. In the FA Cup, Colin Potts played the first hour for Fleetwood Town, and Carlos Logan again started for Barrow. Matty Berkeley has joined Mossley, whilst ex-reserve Ashley Stott reorded a brace for FC Halifax Town in a 3-3 win against Woodley Sports. Playing for Woodley in that match, Levi Kennedy recorded an own goal and there was one at the right end for Gavin Salmon, a former Alty trialist.

AFTER DINNER, IT'S GRAHAM

Trafford FC announce that their "Next Sportsman's Dinner will be held on Friday 12th December at the Chef Peking in Urmston with guest speaker Graham Heathcote, manager of Conference side Altrincham FC, along with comedian Mark Strange & compere Roger Alderson." Tickets are £25.00 each and are available form Dave Law on 07772-287086.

On the field, Trafford's striker, Scott Barlow, leading scorer in the UniBond First North, is going on trial to Peterborough United.

The NL Paper reports that "Northwich will not be forced out of the Marston's Arena despite the collapse of the company that owns the ground. Beaconet Ltd, owned by former Vics' chairman Mike Connett went into receivership on October 30th. Its assets will be sold to pay off creditors. Under normal circumstances the stadium would be sold to the highest bidder, leaving the club homeless unless it could find enough money to buy it. But because of a lease signed between Connett and Vics' chairman Jim Rushe, last year, Vics are protected for 25 years. Northwich are named as "successor tenants", meaning anyone who buys the ground is obliged to let them remain. The upshot is that the site is effectively worthless to developers and that could see its value drop enough for Vics to buy back their home". In the interim Vics are paying rent to the receivers.

NL Daily says that "Fisher Athletic have added two goalkeepers to their squad [one of whom is] Ashlee Jones from Crawley Town".

"Wrexham manager Dean Saunders is set to open talks with Cameroon striker Patrick Suffo over a move to the club" according to Blue Square Football. "The 30-year-old former Coventry and Sheffield United player has been training with the club in recent weeks and could sign a short-term deal after impressing the Dragons' boss. Saunders told the Daily Post: 'I'm considering offering Patrick a short-term deal'". 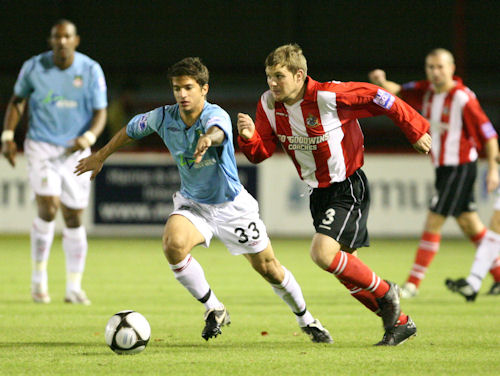 Right: Gavin Rathbone's camera captures Matt Doughty in action last Tuesday against Wrexham. More of Gavin's images are to be found on his GR Photography website.