The Northwich Guardian reports that "Dino Maamria has been suspended by Northwich Victoria. The Vics' boss was told not to report for duty today, Tuesday, after the club sent him on ‘gardening leave’. They have refused to say whether he will return. 'Dino is on gardening leave at the moment', said owner Jim Rushe in a prepared statement. 'He will remain so pending the resolution of internal matters within the club'... A proposed loan move for Peterborough United full back Danny Blanchett, set up by Maamria on Monday, has been scrapped.

Rushe added that first team coach Mike Marsh had been put in charge of team affairs... The Guardian tried to contact Maamria, but he was not answering calls this morning... Last week [Maamria] denied abusing a referee, asking for a personal hearing to put his side of the story after the Football Association charged him for comments made to match official Andrew Sainsbury during his side’s 2-1 defeat at Torquay... On the pitch Vics sunk to their eighth reverse of the season on Saturday when they surrendered a 2-1 advantage before losing 3-2 to Weymouth. It was a result that sent Northwich spinning to the bottom of the Blue Square Premier".

Please can everyone who is traveling to Salisbury try and support or encourage others to use the Supporters' Travel service. Without continued support we can not guarantee to run a coach to all away games. Please can everyone who is booking on the coach for Salisbury do so ASAP as the coach will only run when economically viable. Please be aware that we will only being running a coach service to this game and that if there are not enough numbers will simply not be running any travel, there would be no minibus service. I would also like to thank Geoff Goodwin for running this trip at a considerably lower cost than originally quoted as he understands that the team need as much support as possible and that our away support is a great asset to the team. See the Away Travel page for times and prices. To book on the coach you can either call the club on 0161 928 1045 or book on at a home game by visiting the club shop. A decision onwhether the coach will run will be made by Saturday and posted here.

The YankeeSaturday Yankee is a key fundraiser for Altrincham FC. A vacancy exists for a collector on a small round in Oldfield Brow. Please contact Jenny Heslop at the club (061 928-1045) if you would like to help; commission is payable to collectors. 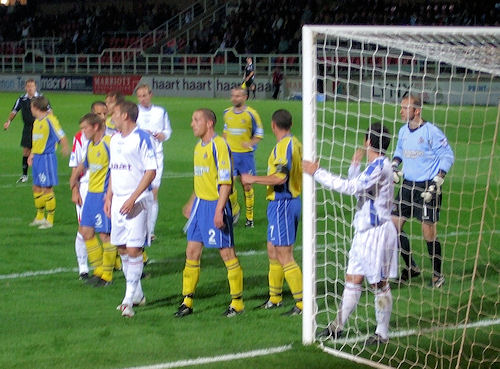 Above: Alty defend a corner at Rushden. Alty deservedly took their first ever point at the Nene Stadium to halt Rushden's run of three successive wins and to lift themselves above Oxford United into 19th place.

Altrincham welcome Lewes to Moss Lane for their first ever visit to the ground. Before then "Justin Gregory could be about to join Lewes" claims The Argus. "The experienced left-back is a free agent after being released by Worthing last week. Gregory, who has played for Crawley, Stevenage, Farnborough and Havant, is expected to link up with the Rooks this week. Lewes Reserves take on Millwall in the Football Combination at the Dripping Pan (Wednesday). Manager Kevin Keehan will look at one or two options before Saturday’s trip to fellow strugglers Altrincham as well as trying out a couple of trialists. Keehan is hoping skipper Danny Cullip will return from a hamstring injury in time for Saturday’s match after missing the last three games".

Altrincham manager Graham Heathcote suggested changes would be made in his programme notes last Tuesday so it will be interesting to see the home side's line-up this Saturday.

Kevin Ellison hit a magnificent hat-trick for Chester City last week - you can see all his goals and every other in the Premiership and League on the Virgin Media site. Kevin's second goal, a long-range freekick, must be a contender for goal of the season.

This Tuesday (7.45pm), Altrincham host Vauxhall Motors in the Cheshire Senior Cup and a familiar face in the visitors' squad is likely to be former Alty striker Pat McFadden.

Blue Square Football says that "Ebbsfleet United are delighted to have three more sites to consider before deciding where to build their new stadium. The club have called Stonebridge Road their home for more than 60 years but announced their intentions to build a new stadium in June... The club were handed the three sites in the Gravesham area after discussions with Gravesham Council and Kent County Council... Club chairman John Moules told the Kent News: 'We hope the new stadium will still be partly funded by a residential development as before. After discussions with the council it appears that there are more sites that may be available to us'". 14 September 2008

On behalf of all those who made the journey to Stevenage last Saturday in the two supporters' minibuses, great thanks are due to Tom Jacobs for his hard work in ensuring that a service operated and to the two excellent drivers, Mark Eckersall and Martin Jordan. Their efforts were much appreciated by all who made use of the transport provided.

Stevenage Borough report on Saturday's game against Altrincham. "For the second week in a row the patrons at Broadhall Way were treated to a feast of attacking football as Altrincham were swept aside by a rampant Borough... The second half was initially a much more subdued affair with Altrincham at last showing some attacking ambition, although the Borough rearguard were largely untroubled... The victory means that Borough have now collected three wins from the past four matches". There are some excellent match photos here. 13 September 2008

Grays Athletic announce that "Following yesterday‘s announcement Grays Athletic Owner/Chairman/Manager, Mick Woodward, has taken the decision to stand down from his position and place the club up for sale, the team will continue to fulfil their remaining fixtures. More news when available". 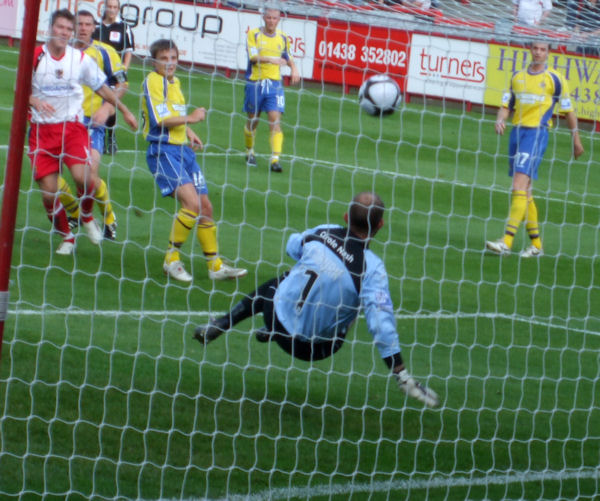 Above: On his 400th start for the club, Stuart Coburn was a busy man, especially in the first half, at Stevenage. Here he makes one of several excellent saves.

A poor first-half showing by the visitors was partly offset by an improved second-half performance but Altrincham were decidedly second-best overall. They have now gone eight games without a win and have been goalless for more than seven hours. Borough opened the scoring after 16 minutes, following a throw-in; a cross from the left evaded both Coburn and Young, allowing Morison to fire into the roof of the net from 3 yards. Substitute Cole made it 2-0 after Elam had lost possession and following a melee near the penalty spot, the ball broke to Cole, who drove home a low shot into Coburn's left corner. Alty had the better of the first part of the second half until Amy Rayner gave Boro a dubious penalty which Morison converted (73 mins). After this, Stevenage comfortably saw out the closing stages despite the introduction of three late substitutes by Altrincham.

Jake Moult, an Alty trialist this summer, is now playing at Leek Town. Fromer Alty youth and reserve Astley Mulholland scored twice for Abbey Hey, but they lost 2-3 to Nelson yesterday. Richard Gresty, former captain of Alty Youth has moved from Vauxhall Motors back to Trafford.

The NL Daily confirms that "Lewes have signed former Queens Park Rangers striker Shabazz Baidoo, having already had him at the club on trial during pre-season. The 20-year-old, who was released by Dagenham & Redbridge this summer, has agreed a month-to-month deal... [Also,] former Brighton coach Ian Chapman has been invited to help out at Lewes. Manager Kevin Keehan has confirmed Chapman has been offered the opportunity to take some coaching sessions while he awaits for another job to come up". Keehan added, "I have spoken to a few other people like Alan Cork, before he went to Bolton, and said if he wanted to keep his hand in by doing a session that would be good. I would say to them what I want from a session, let them get on with it and watch". 6 September 2008 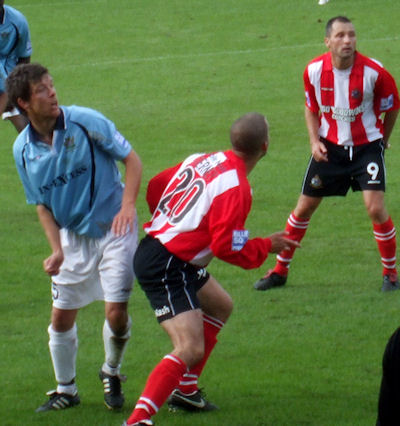 Altrincham took a deserved point off the league leaders but rued first half chances that they failed to convert.