Fisayo Adarabioyo signed on 12 October 2020, his arrival being announced two days later and he made his debut on 27 October 2020 at Hartlepool. 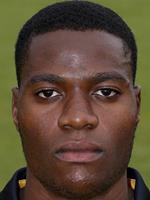 He had impressed manager Phil Parkinson when scoring twice against Alty as a trialist for Curzon Ashton in a pre-season game in September 2020. He also played for Curzon in the FA Cup against FC United of Manchester and, before signing for Altrincham, he also turned out for Stafford Rangers in a home defeat to Hyde United.

He started out at Manchester City where his brother, Tosin, was on the club's books for many years. After moving on to Birmingham City, Fisayo subsequently moved to Perth to join Scottish Premier side, St Johnstone where he was in their under-20s' squad early in 2014 but, by the end of that year, he had moved south to Croydon and Crystal Palace.

After these travels he actually made his professional debut much closer to Altrincham, at Macclesfield Town, a club he had joined early in the 2015-16 season. He made one start and two more from the bench at the Moss Rose.

Next came a single substitute appearance with AFC Fylde's development team before his travels began again with a move to The Netherlands for the start of the 2016-17 season at NAC Breda, who gained promotion during his stay. Fisayo scored once in 12 substitute appearances in the regular league and appeared twice more as a sub in Breda's play-off games before moving to Dutch Second Division side, FC Oss, where he scored twice in 16 games and played one more game in a cup competition.

Early in 2019 Fisayo briefly joined Romanian Liga 3 team FC U Craiova 1948 where he made two appearances. In February 2020, he joined Warrington Town, for whom he made three appearances, scoring on his debut in an abandoned game. His Altrincham debut was delayed by the Covid-19 hiatus to the club's 2020-21 league fixtures, which started on the day of his signing.

By late November 2020 had started eight games for the club before injury sidelined him and he did not appear again till very near the end of the season when he appeared once as a used sub in game 38 of the league season.

His exclusion from the squad list issued on 12 July 2021 suggested his departure but he appeared again in pre-season and was described as a trialist. However, no announcement was made about his status before the 2021-22 season commenced so it is assumed that he is not part of Phil Parkinson's plans. 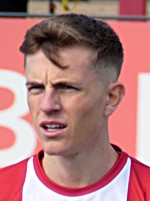 The signing of winger/number ten James Hardy was announced on 22 February 2021, just after his release by AFC Telford United whose season had been decelared null and void.

As a youngster he was with Oldham Athletic for six years before signing for Manchester City in 2012. He moved on to play for AFC Fylde in October 2015 but, after helping them gain promotion from the National League North, he was badly affected by injury for two seasons.

A loan period from Fylde, at FC Halifax Town, followed in February 2019, before he left the Lancashire club, having made almost 100 appearances for The Coasters.

Next, he was signed by EFL club Walsall in June 2019 but, after eleven appearances, he was released at the end of 2019-20 season, whereupon he joined AFC Telford United for 2020-21.

He is an England C international and was their Player of the Year in May 2019. 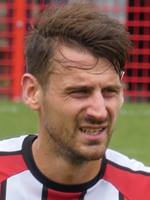 Simon Richman's departure from Altrincham was announced on 21 June 2021, a decade after his arrival at Moss Lane. His versatility meant that, during his stay, he had worn every outfield shirt at Alty except no.3.

Simon was a product of the Bolton Wanderers' academy and the Port Vale youth system. He broke through into the Valiants' first team in League One in 2007-08 and made 48 League appearances for them in all, mostly in 2008-09 in League Two, when he was voted the club's Young Player of the Season. Simon then suffered a groin injury which kept him out of action for several months and, though he made five first-team League Two appearances for Vale in 2009-10, he was released at the end of that campaign. In summer 2010, he had trials with Southport and Worcester City, before joining City and making eight league appearances in the Blue Square Bet North.

Simon became Lee Sinnott's first signing at Altrincham in summer 2011 but his early Alty career was marred by injuries and illness. Having mostly played in right midfield, Simon completed the campaign in central midfield, a position he also played in during 2012-13. Summer 2013 saw him as an integral part of the Great Britain Universities' team which won the silver medal in the world games in Kazan, Russia.

His energy in midfield is an important feature of the team. Outside football, Simon has a degree in chemical engineering from the University of Manchester.

Simon figured chiefly as a substitute during the early part of 2018-19 season and by the end of that campaign he had made twenty appearances each as a starter and as a used substitute. Simon had re-established himself in midfield before suffering a hamstring injury in January 2020.

In 2020-21 Simon generally was named as a substitute, making only four starts plus nine from the bench. 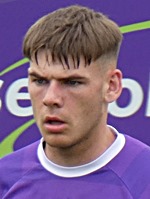 On 6 November, 2019, Altrincham FC announced the signing on an 18-month contract of nippy ex-Hanley Town forward Lewis Salmon. He had previously spent part of the 2019 pre-season with Altrincham and scored for the club in its pre-season game against its own youth team. He then played against Altrincham in Trafford's pre-season match at Shawe View in 2019. He joined Trafford on dual registration for 2019-20 and had become the leading scorer in their Step 4 league by early November, ending his stay wuh 13 goals from 35 appearances.

After signing his Alty contract in summer 2020, Lewis was announced to be going on play for Stalybridge Celtic in 2020-21 on dual registration forms. His loan was set to run till the end of January 2021 but Alty recalled him in November 2020 and he was named in two matchday squads in the National League and one in the FA Trophy but did not get onto the pitch in any of those games. He netted three times in 6(+5) games for the Bower Fold club.

On 5 July 2021 it was announced that Lewis had joined Nottingham Forest for an undisclosed fee on a two-year contract. 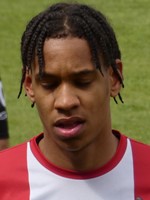 One of three signings announced on 13 November, 2020, Alistair joined Alty on loan from Mansfield Town where he had graduated from their Academy. He had previously made six first-team appearances for Mansfield and also had been on loan at Loughborough Dynamo, Frickley Athletic as well as at Kettering Town, where he played against Alty in February 2020.

He made his Alty debut as a used substitute on 14 November 2020 against Aldershot Town and after a further four starts and a substitute appearance in the National League, Alistair's loan was extended to 13 January 2021.

Having made ten consecutive National League starts in games in which he completed the full ninety minutes in every case, his release from Mansfield was negotiated and he immediately signed for Altrincham on 15 January 2021. His contract runs to the end of the 2021-22 season.

It was a blow to Altrincham when newly promoted Sutton United triggered Alistair's release clause which allowed him to leave for an EFL club. This was announced on 1 July 2021. 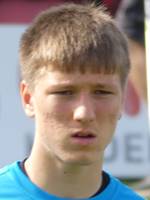 Six-foot plus youth-team 'keeper Joel Torrance was first included in a first-team matchday squad for the game against Kidderminster Harriers on 14 September 2019. This came just nine days after he had impressed in an FA Youth Cup match in which he saved three of the seven penalties that he faced in a shoot-out, only to finish on the losing side!

Although he did not make a league appearance, he was named nine times on the bench in the National League North in 2019-20. His one appearance came in the CSC.