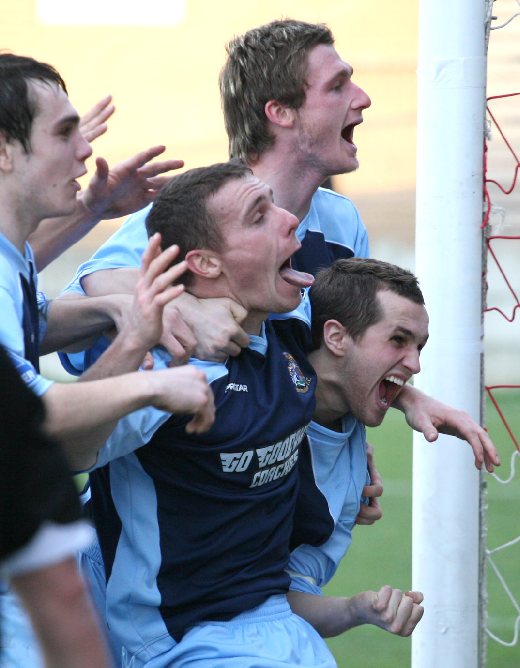 Altrincham's last visit to the Butcher's Arms came on 9 February 2008 when both clubs were in the national division of the Conference; Alty won 2-0. A Robbie Lawton goal, just after half-time set Altrincham on the way and they sealed the game in the 72nd minute when Jennings's freekick, from the right by-line, found Colin Little totally unmarked at the back post and he headed home.

Altrincham FC thanks the collectors and donors who contributed towards a half-time bucket collection of £61.37 on Boxing Day.

We are looking for an Altrincham fan who can provide match reports for Salford City Radio on their Sportzone programme which is aired each Saturday between 3 and 5pm. Coverage will include a couple of match updates during each half as well as half-hime and full-time match reports.

If you can attend most Saturday games and are interested in doing this role, please call Brian Flynn on 07860 561011 or e-mail him.

Salford City Radio is a non-profit Community Radio Station which broadcasts on 94.4FM. Reception is generally good in Altrincham, Timperley and Sale. You can listen online and find out more about the station on their website. The first match that will be covered is the home game against Colwyn Bay on Saturday January 7th.

Rob Williams completed a 93-day loan spell with Altrincham before Christmas, and the former Robins' employee returned to his parent club, where AFC Telford United now report that "AFC Telford United defender Robbie Williams has joined Lincoln City on loan until the end of the season. The centre-half, who has yet to feature in a competitive fixture for the Bucks since signing in the summer, completed his loan move in time to link up with the Imps ahead of their New Year's Day fixture".

At Guiseley it is reported that "On-loan Striker Chris Senior will meet with manager Steve Kittrick and chairman Phil Rogerson on Sunday in order to see what can be done in the way of extending his current deal. Senior’s last game of his current loan deal will be against Harrogate Town on Sunday and all parties are keen on an extension of the loan deal until the end of the season. There are still some issues which need ironing out however and, all things being well, these will be sorted out at the meeting.

Rogerson said, 'We all want Chris to stay as he’s done really well for us. Hopefully we can come to an agreement on Sunday and Chris can keep on playing for us'. Senior is on loan from Alfreton Town and scored twice in his last outing against Harrogate Town on Boxing Day".

The Football Conference tells us that "Droylsden have signed defender David Thompson from rivals Colwyn Bay. Thompson originally joined Bay in the summer of 2010 after being released by Bury, but decided to sign for Northwich Victoria at the start of that season’s campaign. He came through Bury`s youth system and was handed a six-month contract over the summer of 2009 in order to prove himself to the management at the club. However, the decision was taken not to extend the contract and he left the club in January 2010 without making a first-team appearance, although he did make the bench on three occasions.

Thompson made twenty-four appearances for Northwich last season before signing for Marine in March 2011. He only recently rejoined Bay but failed to attend any training sessions with the Seagulls and player-manager Jon Newby expressed his disappointment at the full-back's failure to make his squad after the Bloods made their intentions clear to sign him after he had said that he couldn't get transport to travel to Colwyn Bay from his Cheshire home".

Cassidy has snapped up Bury midfielder Max Harrop on a one-month loan deal, which will make him available for the club until 29 January. Joining the youngster at Croft Park is Sam Hodgson, an ex-Whitby Town midfielder, and ex-Hartlepool United defender Jordon Mellish.

Harrop started out as a youth player at Liverpool before moving to Bury, while 20-year-old Hodgson joins from Cassidy's former club Whitby Town. Mellish is a tall and powerful defender who played for Hartlepool against the Spartans in a pre-season friendly.

Cassidy told the Spartans' official website, 'I have spoken to Richie Barker (manager at Bury) and Max comes highly rated, he is a left-footed midfield player with bags of energy and is a good footballer. With Jordon and Sam, the two lads will come to training and we'll take it from there. Whilst I know Sam well from my time at Whitby Town, I don't know a great deal about Jordon, although he comes with good pedigree and the people that I have spoken to about him confirm that he's a good solid defender'".

However, the Times & Star reports that "Tommy Cassidy has failed in an audacious attempt to take Workington Reds' assistant manager Tony Elliott. The newly-appointed Blyth boss spoke with his former No.2 on the pitch after goals from Gareth Arnison and Phil McLuckie sank Spartans in the Northern Irishman’s first match in charge.

Elliott, who spent a decade as Cassidy’s assistant, turned down the offer and pledged his support to Darren Edmondson. A source close to the club said, 'Tommy spoke with Tony after 2-0 defeat and asked if he would be interested in re-joining him... but Tony made it clear he’s not tempted with a switch to Croft Park'.

Workington have picked up maximum points from their two festive matches, and a win over Blyth on Monday could see them move seven points clear of the drop zone. He said, 'I have seen what Blyth offer and I know we have the ability to go there and beat them. Tommy won’t have been happy with what he saw from his players on Saturday, but I was delighted with what we produced...“It was nice to see Tommy, and we spoke briefly, but again, my focus is on beating him and making sure it’s Workington faces smiling at the end... I want to beat Blyth, then our attention turns to Nuneaton and Altrincham".

Alty's next guests at Moss Lane (7 January) are Colwyn Bay and BSB North reports that "Colwyn Bay striker Danny Lloyd has agreed personal terms to join Lincoln City in January. Lloyd netted a hat-trick against Droylsden at the start of December and impressd Lincoln when Colwyn bay played them in the FA Trophy a fortnight later.

Seagulls player-boss Jon Newby said, 'It is a huge blow to lose Danny, but it is a chance of full-time football for him and we couldn't stand in his way'. Meanwhile, Newby is set to bring himself back into the starting line-up as he tries to end a four-match losing run in the New Year's Day home game against Vauxhall Motors. He also hopes to bring in two experienced Conference forwards on loan next week".

Meanwhile, "Danny Mitchley and a mystery loan striker could be surprise names in the Nuneaton Town squad for the New Year’s Day visit of rivals Hinckley United. Mansfield Town striker Mitchley sees his loan expire 24 hours before Sunday’s game but, after missing the last 10 games with a 'quad' injury, he was set to train with the team last night with a view to extending his stay for the rest of the season...

Manager Kevin Wilkin said, 'We need to see whether we can make it happen but the wheels are in motion... We’ve had him for three months so if we are going to extend the loan the rules say it must be for the rest of the season... I’d like to keep him. He’s looked bright when he’s played'.

Meanwhile, Wilkin says he is pursuing a striker on loan... 'I’m working to get someone in but can’t say for sure if it will happen in time. I’ve been pleased with Wes York and Danny Glover up there but I would like to have alternatives should we need them', he said. Signings would be welcome as left-back Aaron James and forward Ben Pugh look likely to have played their last games for the club. The Boro boss confirmed James is still yet to decide on a move to Bedford Town, while Pugh is a target for Evesham United, although Wilkin says they still have not made a formal approach for the 22-year-old" reports the Nuneaton News.

From Pitchero Non-League, we learn that "Corby Town have won the race to sign much-sought after young striker Mark Jones from ChromaSport Trophies United Counties League Premier Division side Deeping Rangers. The prolific hitman, who has already scored twenty-five goals in all competitions this season, was on the radar of Crewe Alexandra. Jones, 22, lined up for them in a reserve friendly against Wolves and also courted interest from higher up the non-League ladder, with Corby and Cambridge City both announcing their interest. Jones turned out for Blackstones and Peterborough Northern Star in the UCL before joining Deeping in February 2011".

According to This is Nottingham "The return of ever-popular goalkeeper Ian Deakin to Eastwood Town's ranks will act as a 'massive boost' going into the New Year. That's the view of manager John Ramshaw, who has brought in the shot-stopper from Staveley after allowing loanee James Severn to return to Derby County.

Deakin was part of the Eastwood squad that won promotion to the Blue Square Bet North... 'Deaks is Eastwood through and through and knows what the club is all about', said Ramshaw. 'He has played at this level before and I believe he will do a good job for us... I don't think he has ever actually de-registered with us'.

Ramshaw has been busy over the Christmas period reshaping his squad, adding Francis Green to his frontline, from Hucknall. He made an immediate impression, scoring twice to put the Badgers 2-0 up in their Boxing Day game at Boston. The Pilgrims hit back to win that match 4-2...

Ramshaw said: "Francis gives us a bit of experience... He showed what he can do against Boston with two great finishes. Together with Knoxy they could form quite a decent front two... We are still conceding way too many goals at the back – and sloppy goals at that... I think the biggest problem we have is in the full-back areas and if we can sort that then I don't think we will be a million miles away. There is a chance of getting a right-back in before the Boston game but with the budget restrictions as they are, I might have to wait until someone has been moved on before moving for a left-back'".

FLYNNY ON THE AIRWAVES TONIGHT

The Non-League section of Radio Manchester's 'Manchester Sports' programme tonight will focus on the four Blue Square Bet North clubs in Greater Manchester. A fan from each of the four clubs has been invited to take part in this section of the programme, which will be broadcast between 6.45-7.45pm.

You can listen to Radio Manchester on 95.1FM or online here.

There have now been 48 entries for the Altrincham FC Prediction Competition, which starts on New Year's Day, so please help to take the figure well over the fifty mark!

Why not join them and give yourself a chance win a cash prize whilst helping the club? It costs just £5 to enter...

Here are the rules:-