Altrincham FC Youth were scheduled to play their first league game since 31 October on Sunday, 30th but frost at the venue at Wythenshawe Town FC, put paid to the fixture.

Blue Square Football says that "David Livermore hopes Histon's troubles will inspire complacency in the club's Blue Square Bet Premier rivals. The Stutes, who held play-off chasing Grimsby over the weekend, are currently propping up the table with a paltry 17 points from 27 games - five points off closest strugglers Eastbourne Borough...

'We're bottom of the table, so teams will see it as a great opportunity to win three points', he told Cambridge News. 'But if teams think they're going to come here and turn up and win the three points, that could be their undoing. I hope they come here full of confidence, hopefully over-confidence'. He added: 'But, barring the Grimsby game, every team has had to work hard to get the points'".

Nearby, at Cambridge United, "Following his side's heavy defeat at Twerton Park, U's boss Martin Ling was left frustrated by a second half collapse which consigned United to their fourth consecutive defeat in all competitions.

'We talk about who was the better team in the first half - us. Who had the chances in the first half - they had a really good one, we had a couple of good ones and it hasn't fallen our way', Ling said. 'Then we talk at half time, the same as Crawley, make sure we do things right. Every time we move the ball quick, sharp, bright; they can't live with us and we get chances, we need to keep doing that.

The young lad [Jonathon Thorpe] is only playing his second game, he's gone diving in and given a free kick away and they've put it in the net. That makes it difficult. Then you've got two penalties and a break-away from our corner. What have they done, really, to take us apart? You've got to say their fourth goal was a good goal in the way they exploited the situation once we went down to 10 men'...

Having conceded 15 goals in the second halves of their last five matches... Ling said: 'If [the fans] worry about fitness, then they're not seeing it right. If people think my players are not fit then that's absolute cr**. I do testing with them, the same testing I've used for 10 years which was successful enough to get a team like Leyton Orient up. It isn't fitness, I promise you that... People look not fit when things are not going well because they're not full of confidence...

It's been a tough week with Robbie [WIllmott] going and Wayne Gray going yesterday before training'... Asked whether the recent announcement that the Club had been put up for sale had an impact on his players, the U's boss was keen downplay the issue...

'I don't think it's had any affect on the players and it shouldn't have any affect on the players. Obviously I'd like to fetch a couple of people in to freshen it up but that isn't going to be the case because of the finances... I know that some of the younger boys are going to start getting exposed and they're going to have to answer some questions in and around because of the finances as they are'".

The FA Cup 5th Round draw pitches Crawley Town, away, against Trafford's second club, Manchester United who, unlike Altrincham, have yet to beat the Sussex side! The FA says that "Crawley have already staked a claim for the inaugural Ronnie Radford award for The Cup's biggest giant-killing act after wins over Derby County, but a victory at Old Trafford would eclipse that".

A contrasting view comes from Two-Footed Tackle which says that "Normally a non-league team being drawn away to Manchester United in the FA Cup, let alone at such a stage as the fifth round, will attract an enormous amount of goodwill from all across the game. But Crawley Town aren’t a typical non-league club and the level of support the Sussex club will receive from neutrals will probably be considerably less than, say, Burton Albion achieved when they took United to a replay in 2006.

To many outsiders not familiar with non-league, Crawley’s unpopularity may seem odd. Yes, the team may be sitting at the top of the Blue Square Bet Premier, but this isn’t about jealousy from rival fans or a desire to see the leaders get their comeuppance...

The phrase 'the magic of the cup' will no doubt be lazily banded around by some journalists with regard to Crawley’s trip to Manchester United, but their cup run so far has been anything but magical.

In the last round, the Red Devils beat Torquay United 1-0 at Plainmoor, but this wasn’t a giant killing... While the Gulls have scraped together a squad through the usual means of free transfers and picking up the odd released trainee, Crawley have spent close to £500,000 on assembling a team for 'project promotion'...

Crawley, up until this season, have never been flushed with cash. Indeed, much of their time since winning promotion to the Conference in 2004 has been spent battling assorted financial difficulties, while for a time, it was a rare season that didn’t see the Sussex club deducted points for some form of financial problems.

In 2009 Crawley supporters Bruce Winfield and Susan Carter took control of the club, paid off their debts and with it came a level of stability not previously seen around the Broadfield Stadium. This summer, however, Crawley suddenly became the division’s big spenders after Winfield brought in outside investors (although the club has regularly declined to name who these are)...

And, although there’s nothing to suggest anything improper on the part of Crawley’s mystery investors, the eye-watering (for non-league level) sums of money involved mean a lot of people in the game would be more comfortable knowing just who is funding the Red Devil’s spending spree". 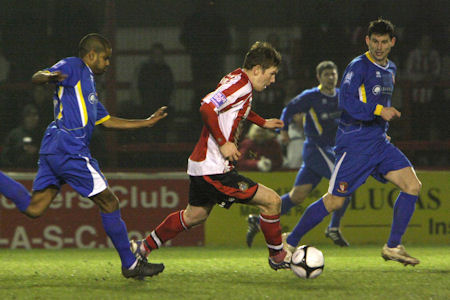