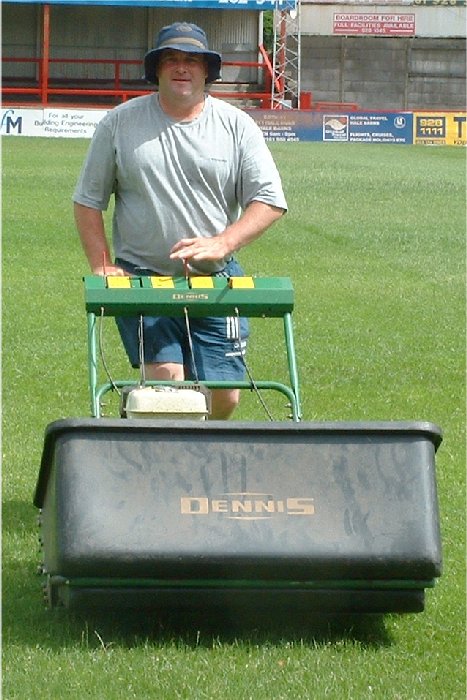 Reserves' manager Neil Brown (left) is currently busy assessing players for next season - as well as labouring hard under a hot sun in his role as groundsman to get the Moss Lane pitch in good condition for next season.

But a late change to the Lancashire League, in which Alty Reserves play, has been announced this weekend. Vauxhall Motors have resigned from the league but four new teams were expected to be joining (Thackley and Ossett Albion from Yorkshire, as well as Fleetwood and Clitheroe), so there would be 19 teams in the League. The League was therefore expecting to arrange the season with each team playing each other just once with the rest of the season taken up by a cup competition to be played initially on a regional group basis. However, since the AGM, it has emerged that Northwich and Thackley have now withdrawn from the League and that the League has now decided to go back to playing a full league programme of home and away games (i.e. 32 games per team). Also, the season will now start on 6 August. Alty Reserves have arranged a friendly - away at West Didsbury & Chorlton on 13 August (2.30pm) but this is now likely to clash with a league game.

There will be a series of "working weekends" at Moss Lane starting on Saturday June 25 and Sunday June 26 and continuing for the next two weekends as well. Jobs to be done include painting work around the ground. Anyone who can help with the ground tidying or who has any other skills to offer to the club should contact the club as soon as possible on 0161 928 1045.

Peter Wright has left Bamber Bridge and joined Chorley. Goalkeeper Mike Pollitt, who was briefly with Alty in 1992-93 is expected to move from Rotherham United to Premiership club Wigan Athletic, according to the Manchester Evening News. Now that Alty are back in the national division of the Conference, the BBC has a specific page for Altrincham FC. It currently includes an articleby Pete Oliver. "'I knew from the moment we won it we would be in for a difficult time', Graham Heathcote told BBC Sport. 'You only have to look at the last couple of years to see that part-time clubs have had problems... But we will try and bridge that gap the best we can within the ways of a non-league club, training a few nights a week. We will find out if Altrincham Football Club, in its present situation, is a Conference National side that can compete with 16 full-time clubs in what it is a fourth division. Or is Conference North the level for a part-time non-league team. That's what we will find out, but we won't push the boat out just to survive... We have got a lot of homework to do on the teams we are going to play'". The Alty manager added, "For me personally it means everything and I believe this club is now back at a level it should be operating at". Oliver adds, Heathcote "now wants to attract four-figure gates to watch affordable, entertaining family football. Heathcote has brought former players Peter Band and Steve Hawes back to the club... There will be one or two other additions but Altrincham will stick largely with the squad that battled through to beat Eastbourne in the play-off final. 'One, because of finance, and two, because I believe they have earned the right to have a go', Heathcote added. 'They won't continue to play in the Conference National on sentiment but they deserve a chance to show me they are up to it. I have no fear in terms of the players' attitude to it. Now we have to see if we are good enough and I believe that, initially at least, we will be. I think the spirit that got us up will be a big ingredient this season, especially early doors. I think that will make sure we pick up some points and then there might be a levelling off point. And if there is, we will have to deal with it'".

Fans returning to Moss Lane next season will see a number of changes. Amongst them will be a permanent camera platform on the Popular Side from which the obligatory matchday video will be recorded. This is a requirement of the Conference as video evidence is called upon to assist in judging disciplinary cases.

Another physical change will see the Robins' Shop enlarged by being extended within its existing structure towards the Golf Road End. As well as stocking a wide range of merchandise, it will also provide a base for Gavin Rathbone's photographic sales. The shop will stock a very wide range of Alty replica kits, coats, sweat shirts, etc., manufactured by Prostar and provided to the club by Ian Senior's Sensports. Pictured, right, is the new away kit. More pictures of other Alty merchandise and a full price list will be on the website shortly. All orders should be placed with Jenny Heslop at the club (928-1045) with delivery of orders by Ian's company being very prompt.

"Northwich Victoria were threatened with expulsion from the whole of the non-League Pyramid if they pressed ahead with their appeal against relegation from the Nationwide Conference National, it has been claimed. Sources in Cheshire and London both say Vics - the one still officially run by the administrators - were under pressure from the FA and Conference not to appeal, which could not have been heard until next week and had the potential to causes confusion throughout the leagues. They were reminded if they appealed and lost, the punishment for failing to satisfy financial criteria could have been expulsion from the system entirely. That would put Northwich Vics into the Mid-Cheshire League - though more likely they would have been put into the UniBond First Division or even the North West Counties League. Faced with that stark choice administrators, Begbies Traynor, opted for the offered place in the Nationwide North, even though they and owner Mike Connett believed they had good case for an appeal. The problem arose because Northwich Victoria (2004), the new club set up by Connett, were not members of the FA and had a lease to the Victoria Stadium, while Vics in administration were FA members but had no lease. But how Vics tripped up over financial criteria has not been made officially clear. Meanwhile, the Northwich Supporters' Trust have written to the FA and Conference asking for a full explanation. Connett appeared on Granada and Sky TV on Monday repeating his view that Vics suffered an injustice and threatening law suits... Connett added: 'This now looks like a witch hunt to me, but we are not taking it lying down because it is an injustice. It's like being put in prison without knowing why', he told IC Cheshire.

Alty meet Woodley Sports in the 2005-06 Cheshire Senior Cup 2nd Round and "NL Daily reports that "If early indications are anything to go by, UniBond League First Division club Woodley Sports look set for a bright future under new manager Ally Pickering". Ex-Alty midfielder Pickering said, "My main three players have signed contracts for next season - striker Mike Norton, midfielder Carlos Meakin and centre-back Mark Phillips - so I’m delighted with that". As well as a four-day tour of Cornwall, Sports also have a pre-season game against Carlisle United on 16 July. "Pickering’s former Rotherham United [and Altrincham] playing teammate Shaun Goodwin (36) will be joining Woodley for pre-season training, and looks likely to take up a coaching role at the club". 17 June 2005

Altrincham Football Club are proud to announce the launch of a commemorative triple DVD.

The package includes two discs which depict full match coverage of the play off final (v. Eastbourne Borough) at The Britannia Stadium, Stoke, together with the presentations and post-match celebrations. A further disc relives the highlights of all three play-off games at Nuneaton, Kettering and, finally, Stoke through the eyes of our club photographer Gavin Rathbone of GR Photography, with approximately 400 images.

Copies of this memorable souvenir can be obtained through the club or via Grahame Rowley by e-mail or by ringing 07720-606-897.

STAR, the Alty supporters' trust, report that they "have paid for the licence for the footage for the DVD and recently received the footage from the BBC on a special digital video cassette... Brian Flynn has sent the tape off to a media friend who is converting it onto VHS from which we can start to edit and produce. Thanks to everyone who pre-paid and for your patience. This is a big project that has not turned out as straightforward as initially thought but the main obstacles have hopefully been overcome now. The delay may have a silver lining in allowing us the chance to put some extra bonus footage on (no promises!)".