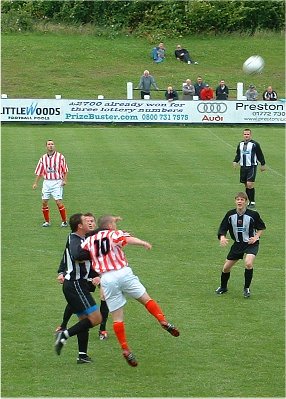 Right: Peter Wright goes for an aerial ball, as Colin Little watches in the background.

It was only six years since Altrincham had last played at Chorley but for Robins' supporter Tommy Maguire it was a little longer since he had played at Victory Park. Tommy, now a regular spectator at Alty home and away games, recalled as he entered the ground yesterday to watch the Chorley v Altrincham friendly that it was no less than seventy-two years since he had played there in a match involving Salford Lads! Tommy also turned out for Colwyn Bay and various other non-league teams in his younger days. He now owns a shop in Sale providing window blinds to companies and domestic customers and also still goes long-distance cycling every Sunday.

Altrincham Reserves, newly reformed this summer, had their first game yesterday at Stockport County's training ground in Timperley. The County side included nine professionals and even one first-teamer, returning from injury, whilst Alty were without several of their defensive squad members. Despite its being their first game together, Alty held County well in the early stages but the loss through injury of another defender during the game, (captain James Marsden), helped Stockport to a 7-1 win with three late goals. Nevertheless, manager Neil Brown, as well as first-team boss Graham Heathcote who watched the early part of the game before travelling to Chorley, were encouraged by a good performance by their weakened side against a strong League club outfit. For more on the Altrincham Reserves' players for 2004-05, please see the Reserves Page. It is also hoped to add photos and pen pictures to this information shortly.

Neil and Altrincham FC would like to thank JFC Sports of Hyde for their generous sponsorship of the reserves' tracksuits. The Reserves travel to Cheadle Town next Saturday and with no first-team friendly that day, hope for some good support from Altrincham fans at that game (k.o. 3pm, directions on the Friendlies page). The Reserves' League season kicks off on 14 August with a long trip to Workington.

SPONSORS OF THE ALTRINCHAM RESERVES' TRACKSUITS

Former Alty captain Chris Timons, at Gainsborough last season, played yesterday for Hucknall Town against Tamworth (0-0). Meanwhile att McNeil scored a hat-trick for Hyde United against Gainsborough Trinity yesterday. Hyde won 5-2, with another ex-Robin, Lee Ellington scoring Trinity's goals. Alty are away at Hyde on Monday night and host Trinity in the first league game of the season on 14 August.

Another possible form guide for the new season for Alty will come when they host Blackburn Rovers on 6 August. Rovers beat our Conf. North rivals Stalybridge 5-0 yesterday at the Bower Fold. Likewise, given our visit to the Irongate in pre-season, Bamber Bridge 2 Droylsden 1, may be of interest. Other Conf. North sides's results yesterday include: