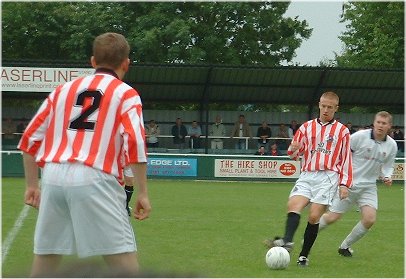 Above, Stephen Rose plays the ball to Steve Aspinall at Shawe View.

Alty came back from two-down (both penalties) to snatch a winner two minutes from the end against an impressive Trafford side. Without Scott and Talbot, and also starting without Maddox, Alty fell behind after 42 minutes when Acton was adjudged to have tripped Trafford striker Lundy. The skilful Graham Vaughan netted the spot-kick. After substitute Maddox had upended Lundy, Vaughan scored again from the spot on the hour. When substitutes Kieran Lugsden and Stuart Wright joined the fray Alty looked a better side and scored twice in two minutes through Little and Lugsden (70 & 72 mins). A rasping shot from Holt hit the bar (as Shuttleworth had done in the first half) but Hallows tapped in the winner following neat work from Lugsden and Little, both of whom had good games once more (88 mins).