Part One is here.

For the last weeks of the 1962/63 season Fred assessed the squad and made few changes to the side except for bringing in former Manchester United goalkeeper, Gordon Clayton, for the last three games of the season, though two defeats and a draw hardly showed an improvement! During the close season Pye used his contacts to begin building his own side. Goalkeeper Bobby Allan was persuaded to re-join and a collection of League professionals was blended with Cheshire League talent. Amongst the professionals signed were former Bolton skipper John Higgins along with Ian Greaves, and former Blackburn Rovers duo Roy Isherwood and Paddy Mulvey. Bobby English was signed from Southport along with Ken Finney from Tranmere Rovers and, from non league, veteran Freddie Taberner was brought in from Wigan Athletic, along with Jackie Dobson.

Despite this influx of basically a new team, results were not consistent and despite reaching the 1st Round of the FA Cup, (going out to Wrexham), Fred started to become impatient and began making changes. Johnny Worth was brought in from Rusholme and soon released to Hyde, goalkeeper Mitchell Downie was signed and dropped. It was obvious that the team was being changed too often and not being allowed to gel, something that Pye admitted had been a mistake, the following season. The arrival of Felix Reilly, Neil Dewer and 'goal machine' Alan Foster saw the team more settled and consistent and it finished the season in fourth place, (up 4 places from the previous season). More importantly, Fred landed a trophy, the Cheshire League Cup, beating League Champions, Macclesfield over two legs, a notable achievement. After drawing the home leg 0-0, Altrincham won 4-2 at the Moss Rose.

If this was a step forwards, the 1964/65 season was a step backwards as once again Freddie sought the right blend by chopping and changing players. Only five players out of the 37 used that season could be considered first choice (Reilly, Wardle, Dewer, Billington and Cooke were the only players to play over 30 league games). The team finished eighth again in the league and were knocked out of the league Cup at the semi-final stage by Runcorn, after again beating Macclesfield in the previous round. The one significant event of that season was the signing of Jackie Swindells but, in the handful of games he played at the end of the season, he did little to suggest the impact he would subsequently have on Altrincham's fortunes.

When Altrincham opened the 1965/66 season it was with a revamped side which included Dewer, Reilly and Swindells from the previous season, supplemented by wingers, Clive Colbridge from Wrexham and Ronnie Taylor from Colwyn Bay, centre forward Pat Connelly from Colchester United, left half Frank Peters from Sankeys and full backs Jimmy Brown and George Forrester, also both from Sankeys. But, quite possibly, the most crucial signing was Les Campbell, the man responsible for engineering the chances for the 'All Star' forward line. This time Pye backed his judgement and stuck with the team without chopping and changing and they in turn rewarded him with an unbeaten run from the start of the season that only ended in the 5-0 Third Round FA Cup defeat at Wolves. The team finished as League Champions, losing only twice, winners of the newly inaugurated Macclesfield Floodlit trophy (forerunner of the North West Floodlit league), League Cup finalists and Cheshire Senior Cup semi-finalists. In all competitions Altrincham scored 189 goals with centre forward Connelly scoring 34 and wingers Taylor and Colbridge contributing 17 and 13 respectively but dwarfing them all was Jackie Swindells who scored 82!

White and Swales were thus vindicated in their choice of manager and they now had a team that was getting national exposure. For the 1966/67 season Pye used his astute judgement to freshen up the championship winning side, bringing in Tommy Heron along with Johnny Worth. As the season progressed Colbridge and Taylor dropped out of the picture to be replaced by Heron and Frank Twist but the back bone of the Championship winning side was still in place; Campbell, Dewer, Halliwell, Brown and Swindells were all still regulars. Although going out of the FA Cup at the first hurdle, the team finished as champions once again, this time also winning the Cheshire Senior Cup.

The 1967/68 season was to be Altrincham's last in the Cheshire County League before joining the newly formed Northern Premier League and it was Pye's intention to bow out as champions yet again. Once again Pye showed his astuteness in the transfer market. Whilst retaining his core players of Dewer, Halliwell, Swindells, Worth, Stewert and Peters, he brought in winger Ronnie Smith from Southport and 'star' players like Bert Lister and Albert Quixall, who not only sharpened up the side but attracted much needed publicity to the club. Unfortunately, Altrincham lost the championship by three points to Macclesfield Town, although they gained a measure of revenge by lifting the North West Floodlit League title, by beating Macclesfield in a two legged final.

Altrincham retained the Northwest Floodlit League title the following season (1968/69) by again defeating Macclesfield in the two-legged final but, in the newly formed Northern Premier league, Altrincham took time to adjust and eventually finished a disappointing ninth in the table. New players were drafted in, like former Manchester United youngster Peter Jones and Rochdale's Brian Taylor, to bolster the side but, again, the team was changed around far too often to gel properly. Furthermore, Fred's business demanded more time and the increased travelling was also taking its toll on the manager, eventually forcing him to resign in favour of former Stockport County player Matt Woods and accept a position on the Altrincham board.

He was later to become General Manager and Vice-Chairman at the club, as well as acting as caretaker manager early in 1970 when player-manager Laurie Brown resigned, but he had no intention of resuming the manager's role on a permanent basis. He remained connected with Altrincham till late 1974 when he accepted the joint Chairman's post at Stockport County, eventually becoming Chairman before moving to become chairman of Wigan Athletic around 1981. He was later invited to join the board at Manchester City by Peter Swales around 1985, eventually becoming vice-chairman. He left Manchester City in June 1998, by now 70 years old.

It is believed that Fred is now retired and living in Spain.

Fred Pye's legacy to Altrincham is not to be underestimated. He not only produced a trophy-winning side to be proud of but also brought the club national exposure and a higher level of expectation from its supporters. 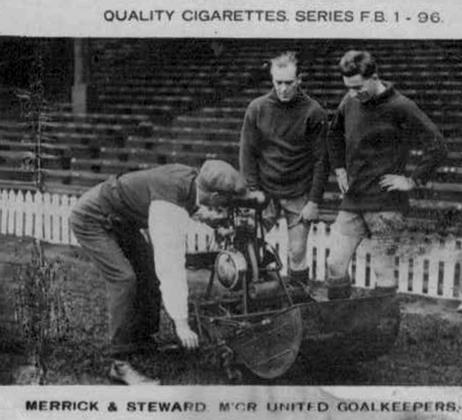