After Wayne Rooney's recent debut hat-trick for Manchester United and John Laidlar's website piece on Altrincham's own Philip Pritchard we thought it might be interesting to see if there were any other players who had scored a hat-trick on debut for the Robins and if so, who were they. Surprisingly enough none of the expected 'big' names appear to feature, no Swindells, Worth or Rogers but although some faded away very quickly from the Moss Lane scene at least 3 players who hit debut hat-tricks used it merely as a precursor to some spectacular goal scoring records.

To begin with we have found 7 little known or relatively little known players, (including Phil Pritchard), who all scored a hat-trick on debut they are:

Philip Pritchard (right) was not unique but at 17 years old it was a spectacular start to his Cheshire County League career. It took place in last game of the 51/52 season, a 5-0 home win over Winsford United; unfortunately he only played a further 4games the following season, scoring 1 further goal.

A player called Horridge also scored a hat-trick in Altrincham's 6-5 win over Ashton National at the beginning of the 31/32 season; he only played 3 more games before serious injury ended a promising start.

A trialist centre forward from Wigan Borough, Taylor, scored a hat-trick on debut for Altrincham in the 6-3 win over Whitchurch in 1928/29 and then played the next 2 games (without scoring) and departed.

In season 33/34 another centre forward trialist, called Nixon scored a hat-trick on debut in the opening match of the season, a 4-1 win over Tranmere Rovers reserves and went on to play 20 games that season in all competitions, scoring 11 goals.

Another centre forward, Burgess, in season 30/31 opened his account with 3 against Nantwich Town in a 4-0 away win and went on to play a further 13 games, scoring a total of 15 goals and a further 2 hat-tricks

George Johnson had flirted with League football, having played a couple of games for Rochdale in 1954/55 and 6 games for Southport in1962/63, he came to Moss Lane from Ashton United and started the 63-64 season with Altrincham, making his hat-trick scoring debut in the1st game of season a 7-3 win over Stafford Rangers however after 2 further games he was on his way back to Ashton United.

Arthur Monks, a local amateur inside forward made his debut in a 5-3 home win over Winsford, notching a hat trick. He went on to play a total of 28 games in the 60/61 season and scored a second hat-trick away at Northwich in a 5-3 win and finished the season with 9 goals. Once again though a spectacular start faded to nothing due to injury and in 61/62 he played only 5 games, scoring a further 2 goals and in 62/63 he managed a mere 3 games with no further goals. 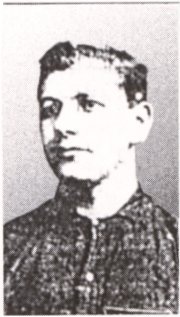 Three further players all scored hat-tricks on their Altrincham debuts and all arrived with a reputation for goals and although all had relatively brief Altrincham careers, they all delivered what they were signed for.

Alan Foster had had spells with Northwich Victoria (1958/59-59/60), Crewe Alexandria (1959/60-60/61) and Runcorn before arriving at Altrincham mid way through the 63-64 season as a goal scoring legend. His Altrincham debut was marked by scoring all three goals in a 3-3 draw with Mossley; he then followed this in the next match with a hat-trick in a 5-0 win at Congleton and followed this with 2 goals in his third match, a 5-0 win over Chester Reserves. Injuries limited his appearances and after the opening game of the 64-65 season, he moved to Macclesfield.

18 year old Cliff Stanton arrived at Moss Lane from the Greek Street Baptists in Stockport and made his debut against Eccles United in the seasons opening fixture at Moss Lane, a 4-1 win and a debut hat-trick was followed by a goal in each of his next two games. Cliff continued to score freely during the 26/27 season and finished with 50 goals in 43 appearances for the Robins, a total that included 4 hat-tricks and 2 four goal hauls. Naturally Stanton's prolific scoring attracted the attention of Football League clubs so it was no surprise that the following season he was playing for Oldham Athletic.

The most spectacular start to an Altrincham career must be Richard Best (left), a player that Altrincham had been trying to sign for some time and finally they achieved it for the start of the 1908/09 season His debut was in the opening match of the season in a 3-3 draw with Hooley Hill in the rather grandiosely named, Manchester and Salford, Healy Charity Cup ( a competition that both Manchester United and Manchester City had previously competed in and won). He then scored 2 in his next game, a 7-3 league win over Hazel Grove and followed that with a hat-trick in the next game a 4-1 FA Cup Preliminary round win over Pendlebury and followed this with yet another hat-trick in the 4-4 replay against Hooley Hill, an incredible 11 goals in his first 4 matches!

Best, nomadic throughout his career, didn't see out the season with Altrincham, moving to Nelson after scoring 39 goals in just 29 games, including 5 hat-tricks. After seeing out the season at Nelson he eventually arrived at Macclesfield for the 1910/11 season and in a touch of symmetry scored a hat-trick (on debut again) against Altrincham in the first game to be played at Altrincham's new Moss Lane Ground.

After the article above had been completed, it was pointed out that we had omitted one well known player, Don Weston, apologies for that oversight.

Don made his debut in the 8-1 trouncing of Northwich Victoria in front of 2430 spectators at Moss Lane. The other scorers were Ian Morris 2, own goal, Mick Metcalf and of course, Jack Swindells. In all Don played 16 games for Altrincham and scored 9 goals. He moved to Bethesda the following season.