During season 2006-07, Altrincham Football Club set up a Featured Club Scheme which aims to build stronger links between the Club and local junior football clubs. The first initiative has been with the longstanding the Timperley & District Junior Football League.

Under the scheme, one junior football club from the selected League is chosen to attend each home game at Altrincham FC, the choice of club being made in conjunction with the League's officials. The club in question is then invited to attend a home match at Moss Lane where seats are reserved for them in the Goodwins Family Stand.

Above: Unicorn Junior FC were the visitors to Moss Lane on 12 February 2008. They are pictured above raising the roof of the Family Stand before the game against Farsley Celtic. Anyone wishing to join this thriving junior football club will find details on the Unicorn website 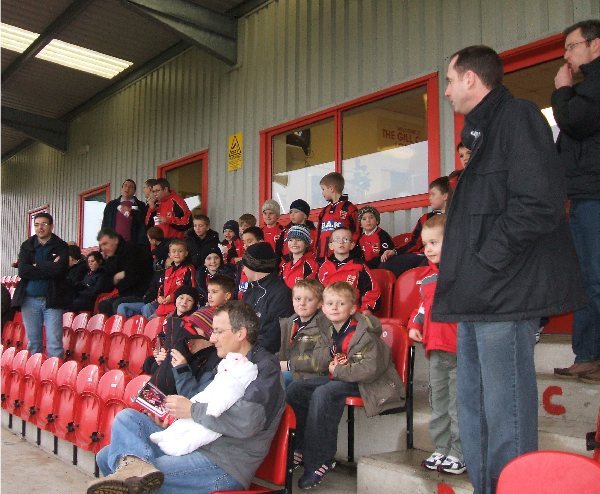 Above: Broadheath Central were the visitors to Moss Lane on 19 January 2008 for the game against York City.

Above: Ashton-on-Mersey JFC watched the Gravesend match at Moss Lane on Easter Monday 2007. Here Alty boss Graham Heathcote talks to the visitors before the game.

Above: The visitors from Urmston Town JFC before the match against Exeter City.

Urmston Town (above) were the latest club to visit Moss Lane under the Featured Club scheme for junior football clubs in the Timperley & District Junior Football League. They came on 31 March 2007 for the match against Exeter City. Ashton on Mersey JFC and Hale United JFC are the visitors for the Easter Monday match against Gravesend & Northfleet.

The first Featured Club from the Timperley and District Junior Football League was Timperley Villa Youth FC who attended the home Nationwide Conference match against Crawley Town on 18 November 2006. Alty manager Graham Heathcote spoke to the visitors before the game and a good time was had by all.

The fourth Featured Club to visit Moss Lane on 27 January were Benchill Celtic from the Timperley & District Junior Football League. Alty chairman Geoff Goodwin hails from Benchill himself and he is seen above talking to the Benchill club's officials before the match against Kidderminster. Behind him, injured Alty captain Steve Bushell signs autographs for the visiting Celtic teams. After meeting Geoff, Steve and the Alty manager Graham Heathcote, Rocky Robin made a welcome appearance and he is seen below with the visitors.

The fifth visitors to Moss Lane under the Featured Club Scheme were Fletcher Moss Rangers. Above, Alty boss Graham Heathcote chats to Fletcher Moss Rangers' staff and players before the start of the game against York City on 10 February 2007. Fletcher Moss boast Lewis Chalmers, Warren Peyton, Pat McFadden and Daniel Heffernan as ex-players for their club who are currently in the Altrincham FC squad - and manager of the Reserves, Neil Brown, and physio Alan Ainsley also are active in the Fletcher Moss junior football club. Rangers were at Moss Lane as guests of Altrincham FC under the Featured Club scheme.

Lymm Rovers JFC, who were Altrincham FC's "Featured Club" from the Timperley Junior Football League on Tuesday 6 March, can claim the glory for Altrincham's thumping win against Cambridge United that night. For Rovers were the sixth junior football club to watch a match at Moss Lane as guests of Alty but all the previous five had failed to see Altrincham win! Pictured above, some of the Rovers players queue up to buy sweets at half time in the Cambridge game, whilst one young Rover has just finished an ample tray of chips from Keith Davey and Dawn Abbott's refreshment trailer. We hope that Lymm enjoyed the visit and that they have now started a trend for Featured Clubs in terms of watching home wins at Moss Lane. The next Featured Club is Broadheath Central, who will be here for the Grays match.

The seventh junior football club to visit Moss Lane were Broadheath Central, who came to see the 1-0 win over Grays Athletic on 20 March 2007.

More clubs from the League will visit Moss Lane during the season. If you want to know more about the Scheme or wish to help in any way, please contact Altrincham FC by phone on 0161 928-1045 or by e-mail.