GET A PHOTO SOUVENIR 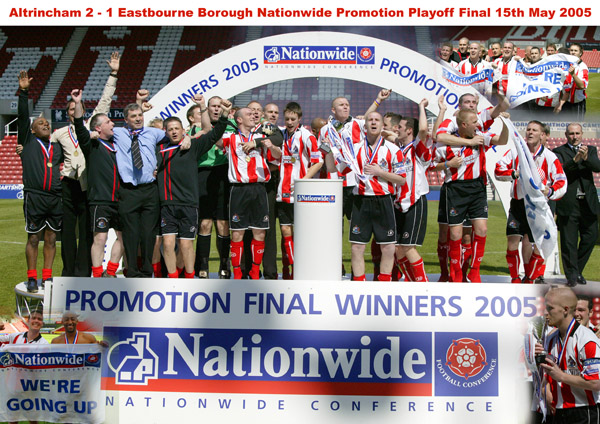 Above: Gavin Rathbone's photomontage shows Alty celebrating at Stoke on Sunday. This and more of Gavin's excellent images can be purchased on his website.

More pictures of the game at Stoke can be found on Alty supporter Paul Johnson's Aardvark Sport site. 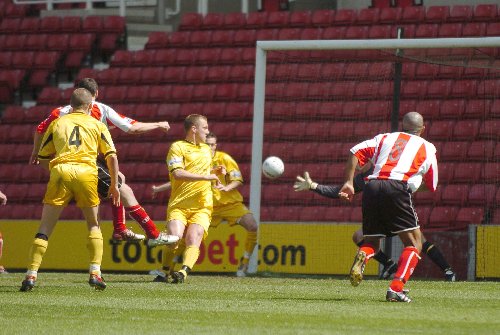 Right: Rod Thornley in the act of scoring (I think!) at Stoke - picture kindly supplied by Andy Boyers.

With the fantastic news of promotion to The Nationwide Football Conference on Sunday, the need for increasing income for the club has become an immediate requirement. With this in mind may I appeal on behalf of the club for people/companies to join our Patrons' Club for 2005. We have exceeded our initial target of 50 and have signed up more than 100 people/companies - but more are needed!

For just £50 (or £5 per week for the 10 weeks of the close season) your name will appear on the club's official web site, in the matchday programme throughout the 2005/2006 season and you will also have a chance in the draw to be made in July, to be the match sponsor for our very first game back in The Conference. This package, that used to retail at £500, allows 10 guests to be wined and dined pre match, and includes matchday programmes and half time drinks and biscuits for all sponsors.

Help your club and join the Patrons' Club - we need your help. Full details of the scheme and a list of its members are here.

Shots Web says that "Manager Terry Brown has announced that three players have played their last games for Aldershot Town. Chris Giles, Dwain Clarke and Jon Challinor have all been told they do not figure in the Brown's plans... Brown is also said to be moving into the transfer market to add players to the squad and will be hoping to unveil at least one player soon".

"Nick Henry, head coach of Scarborough, is... waiting for a number of players to put pen-to-paper on new contracts before he can delve into the transfer market. Keeper Leigh Walker, defenders Steve Baker, Ashley Lyth and Kevin Nicholson and midfielder Neil Bishop have already signed their contracts, while a number of others are expected to follow suit". Henry said, "It was disappointing to hear that Chris Senior, Scott Kerr and Mark Hotte might not be coming back... There is nothing more we can do - we won't be held to ransom", he told Scarborough Today.

"Dagenham & Redbridge have announced the signing of striker Tresor Kandol from neighbours Thurrock... Whilst at Shipp Lane, the 6ft 1in striker scored 79 goals in just 113 starts, and he joins the Daggers for a small transfer fee on a two-year contract" says the Daggers website.

At Canvey Island "Striker Jason Hallett has signed a further one-year contract". Whilst at Gravesend "The Club is pleased to announce that Jimmy Jackson has today signed a new one year contract... on a part time basis. However Jean-Michel Sigere [who scored against Alty for Rushden in 2000] has not accepted the terms offered to him and has left the club".

At the end of April, Cambridge United applied to enter administration and were docked ten points but only after relegation from League Two was a certainty anyway. Confguide adds that "The club, with liabilities of about £900K, sold its Abbey Stadium earlier this season to ease cash flow problems... Relegation to the Conference means that it is not feasible for the club to trade sufficiently profitably to pay off the debt". The BBC added that "directors of the struggling outfit believe it will need £140,000 to keep them in business. Finance director Nick Pomery told the club's website: 'The administrators will decide by 20 May if the club has a future or be put into liquidation'". Manager "Steve Thompson has left the club following their relegation from the Football League". And The Cambridge Evening News reported yesterday that "United's out-of-contract players are waiting to find out if they have a future at the Abbey. Caretaker manager Rob Newman will hold crunch talks with a host of players on Thursday as he shapes a squad for next season. United have only four players with deals for the 2005/06 campaign - Darren Quinton, John Turner, Dan Gleeson and Ashley Nicholls - and Newman has to submit a list of retained players to the Football League on Saturday... With the club in administration... they cannot offer new contracts, so will instead issue letters of intent to renew players' deals". The Finance Director added that United "would aim to set a break-even budget for next season after several years averaging £500,000 losses". The Cambridge United Supporters' Trust reports that "With the deadline of Friday 20th May for raising £40k to keep CUFC out of liquidation looming, we are within £10k of the target and are very hopeful that we will meet it... Any monies raised over and above the £40k that is required now will be held and carried forward against the close-season costs for July and early August, expected to be £75-£100,000".

This is Kidderminster Harriers says that "Harriers' board have demanded face-to-face talks with the men who want to take their place. The third party, believed to be a Hampshire-based consortium led by former Farnborough chairman Ron Higgins, want to check the Aggborough club's accounts before making any firm take-over bid. They could buy Lionel Newton's majority shareholding for £1, but must also be prepared to plough at least £400,000 into the cash-strapped outfit. However, current chairman Colin Youngjohns and his group, including former Harriers chief Dave Reynolds, are not prepared to give up the club without a fight and a counter-offer... It is feared the future of the club may even remain undecided before the annual meeting on June 7".

And also, Newton said "I would have thought that by now I would have had a formal offer in writing from the current board... In another twist, the Kidderminster Harriers Independent Supporters Trust (KHIST) are thought to be contemplating their own audacious takeover bid".

Stalybridge Celtic have "completed the signing of four players as manager John Reed... has gone back to his former club Harrogate Town to secure the services of goalkeeper Nick Buxton (28), defender Mark Barnard (29) and ex-Celtic striker James Turley (23). The quartet is completed by striker Lee Ellington (24) who comes to Bower Fold after three consecutive 20-goal seasons at Gainsborough Trinity".

"Busy Dean Thomas, manager of Hinckley United, has announced his retained list for next season and seven players are being allowed to leave... Along with the already announced retirement of Adam Willis, and the release of John Burns, the players let go are defenders Gavin Stone and Danny Pitham, midfielder Wayne Dyer and striker Chris Smith. Goalkeeper Tommy Whittle... has been placed on the transfer list... Thomas is currently in talks with another three players, a defender, a midfielder and a striker, having already brought in former England semi-professional internationals goalkeeper Ryan Price and striker Marc McGregor, Worcester City’s long-serving Carl Heeley and Scunthorpe youngster Andy Brown". The boss said, "To bring in players I need to get rid of others and that's just the way it is. I've had some of these players with me for two or three seasons now and I felt I just had to cut my losses" reports the club website.

Worksop Town have "signed Richard Carrington... who was a prolific goalscorer at Barnsley, being top scorer in both the Reserves and the Youth Team in 2002/03". 18 May 2005

... AND THE HOME FRIENDLIES COME FREE TOO!

In addition to getting the cheapest admission prices in the Conference National, purchasing an Altrincham FC season ticket for 2005-06 will also bring you free entry to all of the pre-season friendlies at Moss Lane. It is expected that three of these will be against league clubs (including one from the Premiership), whilst an interesting fourth home match is already arranged - against Scotland's Greenock Morton.

For the record, purchasing an adult season ticket for the terraces before 30 June, at £160, means that it could cost you as litle as £7.62 to watch each of the 21 Conference home games in 2005/06 - as well as seeing the home friendlies free. Full details of ticket prices are below...

And, why not also join STAR, (the Alty supporters' trust) and get cheap travel to all away games as well as many other benefits? See the STAR website for details. Do you really want to drive your own car to Exeter, Canvey Island or Aldershot and back? Travel in a Go Goodwins luxury coach instead and enjoy the company of fellow supporters as well.

A meeting will be held in the Noel White Suite on Monday 6th June at 7.30pm to invite people to volunteer to help the club during the coming season. With the step up to the National Conference, attendances will hopefully increase and with that comes greater need for manpower (person power!) to run the various operations both pre-match, during the match and post match. Even if you can spare half an hour, your help would be appreciated and a job can be found for you.

We are also looking to utilise people’s expertise be it in handiwork, I.T. marketing or other. If you believe that you could be of some help to the Football Club, please come along and express an interest.

The club needs your help – please come along!

Grahame Rowley, on behalf of the Board of Altrincham Football Club, writes:

Members of the Board met on 17 May to discuss pricing issues for next season. With the need to strengthen the squad to face the challenges of the Nationwide Conference it was felt that admission prices would have to rise. The proposed new prices are:-