TRAVEL WITH THE BEST

Alty chairman Geoff Goodwin's company Go Goodwins Coaches, which won the national award for Best Corporate Executive Coach 2004-05, has revamped its website and you can now book its services on line. Alty fans will know that Go Goodwins supply the Altrincham F.C. team coach and the STAR supporters' coach, both of which will be going to Lancaster tonight. Details of tonight's trip are on the Away Travel page. As well as carrying Altrincham's finest, Geoff's company has a contract with the English Cricket Board and Geoff himself has spent the last fortnight ferrying round the Australian cricket tourists. Amongst his company's other famous clients have been Justin Timberlake, Christina Aguilera, Destiny's Child, Hear'Say, Steps, The Four Tops, The Temptations and The Beach Boys, not to mention Manchester City F.C, Bradford City F.C. and, Macclesfield F.C.. 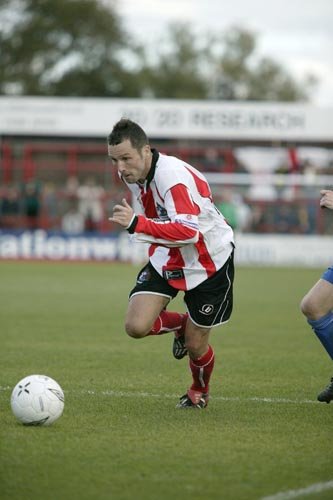 Right: Another of Gavin Rathbone's excellent shots - available from the Robins' Shop - shows Colin Little at full steam against Worksop. More on the STAR site.

As well as Altrincham's league game at Lancaster City, tonight (Tuesday) sees the replay between Farsley Celtic, based at Pudsey near Leeds, and Marine - to determine who plays Alty in the FA Cup on 2 October. Whilst Marine are well known to us, the best known names at Farsley are probably Curtis Barnard and Michael Midwood.

Nuneaton Borough visit Moss Lane next Saturday. IC Coventry says that "While Boro remain the only unbeaten side in Nationwide North on their travels, it's a different story on home soil where they continue to disappoint and let down their gutted followers... They wilted dismally, allowing Hucknall to net three times in a 19-minute spell... And the man who grilled Boro was the ever-dangerous Danny Bacon" - a rasher joke I haven't heard in years!