Altrincham were forced into changes today by the need to keep the youth team's 53-goal strike partnership of Kieran Lugsden and Steve Lunt rested for the following day's first-team game at Moss Lane. So, it was Sam Cawthra and Stuart Cook who formed a new front-line for the Robins. Alty were also without Andy Thorpe and Paul Lewis but welcomed back captain Alex Frost for his first start after injury. Alex had the rare distinction for a centre-back of being the leading scorer in the starting eleven. Josh Collins moved forward from centre-back. Lewis Chalmers had recovered from a knee injury to start on the bench.

Lancaster have had a massive fixture backlog and have brought in players from Cardinal Newman College and these formed most of today's team.

After Lancaster had wasted an early free-kick from 20 yards when the ball was driven into the Altrincham wall, Altrincham took an early lead. A finely judged long cross from the left by Matthew Tooth located Adam Ball to the right of goal. Adam gathered the ball cleanly and blasted a shot into the top of the net, to the keeper's right (3 mins). Douthwaite and Collins then broke up Lancaster attacks before Taylor's well struck effort from 25 yards went wide of the Lancaster goal (6 mins). Next, Collins also shot wide before a move started by Collins saw Cook shoot only narrowly wide from a feed by Cawthra (8 mins). Taylor, who had recently been out injured, was showing his usual bite in midfield but it was the unlikely figure of Matthew Tooth who soon found himself in the clear from Connor and Cook's build up but the Alty left-back shot over the bar (11 mins). A fine 40 yard ball forward from Frost then found Cook but, although this attack came to nothing, Alty soon won a corner on the right. From Cook's cross, Collins headed over the bar.

But Alty were not having it all their own way and Lancaster now won two corners in quick succession (21 and 25 mins). Ball and Connor then contrived to fed Cawthra, who put the ball in the net but was offside (27 mins). After a stoppage for treatment to Kelvin Lugsden, who hurt his arm in an aerial challenge, the game went through a quiet period. However, from Taylor and Cook's supply-line, Cawthra did well to poke in a shot which keeper Madden saved well (36 mins). Lancaster were given a fortuitous corner when Tooth's clearance hit a Lancaster player and went out of play as the visitors applied some pressure before the interval. From Collins's pass Cawthra again prompted a reaction save from the advancing Madden (44 mins). The half ended with Heys driving a Lancaster freekick over the bar.

The second half started with a magnificent save from Barry George who tipped over a rasping shot from the right by Paul Greer. From the corner, Lancaster headed wide but they soon won two more flag-kicks in quick succession. Alty then had a shout for a penalty from a Collins cross when Connor went down. Altrincham then won a corner from Cook's cross from the right (55 mins). Soon afterwards Cook gave way to Lewis Chalmers (59 mins). Josh Collins now moved up front alongside Cawthra. 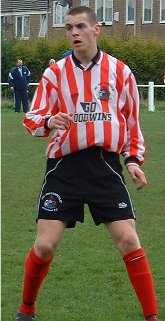 Taylor and Connor continued to battle in midfield whilst the back four for Altrincham also looked solid, once again. Altrincham now made another change with Grimshaw replacing Taylor, who had been put on stand-by for tomorrow's first-team game and was being spared further exertion today (66 mins). Lancaster won two more corners to underline that the game was far from over. Alty responded with a good cross from Douthwaite, which Cawthra put wide of the upright (69 mins). Collins then curled a shot narrowly over the bar from the left (70 mins). However it was Lancaster who continued to win corners but Lugsden, Frost and George were equal to them. When Malloy, Madden and Alty's Collins all converged on a ball just inside the Lancaster box, the keeper appeared to bring down the Alty man but the ref saw it otherwise and gave a goalkick (78 mins). Another odd decision followed when Alty were given a corner after Cawthra had got behind the defence and the ball had run off him out of play.

To the clearly expressed surprise of many of the Lancaster team, the visitors then substituted their goalkeeper. Madden appeared neither to be injured nor to have been playing poorly but he was replaced by Adam Ball - the second player of that name now on the pitch (80 mins). Lancaster continued to press for an equaliser but Douthwaite blocked an effort from Heys, for a corner (83 mins). Douthwaite was soon surging up the right and found Cawthra. His cross from the by-line, right of goal, set up an almost open goal for Grimshaw but, from close range, the Alty sub lifted the ball over the bar (84 mins). The game was restored to having just one Adam Ball, when Alty removed their player of that name in favour of Tom Hilton (85 mins).

Altrincham wrapped up the points when Lewis Chalmers advanced up the middle. His progress was half checked by a challenge but Lewis kept going and finished firmly from 15 yards (88 mins). Lancaster made a late switch with Lambert replacing Hornby but it was too late to prevent Altrincham taking the points in a hard-fought victory founded on a solid defence.