Alty were without injured captain Alex Frost and also had deputy captain Lewis Chalmers unavailable due to work commitments. So, Matt Tooth wore the skipper's arm band today. St Helens included Danny Melling, who had played for St Helens against the Altrincham first team in a pre-season friendly this summer.

Andy Thorpe (no.6) celebrates as Kieran Lugsden, hidden by the no.3, scores the opener.

Altrincham kicked off, playing up the slope at the impressive Ruskin Drive sports centre but with the bright sun behind them and therefore not troubling Ashley Timms. The first goal effort of note was Josh Collins's shot from a Taylor feed (6 mins). Then Thorpe played a fine ball forward from his right-flank position which Collins volleyed well but the keeper kept it out and Steve Lunt's follow-up was also saved (9 mins). Soon afterwards, Short's kicked clearance only reached Lunt on the half-way line and he passed forward to Kieran Lugsden who scored well, from the left of goal (10 mins).

Stevie Taylor was playing well in his central midfield partnership with Paul Lewis, but a lot of the early play was on the left flank where Collins impressed as he won several headers. Thorpe, too, was making a good contribution on the right but as Altrincham conceded three free-kicks in a short space of time, St Helens got back into the game but Kelvin Lugsden and Steve Howarth cleared their lines well. After a stoppage for treatment to Daniels, Lunt got in a shot, as he was being challenged by Priestley, but his effort just cleared the bar (20 mins). Then from Kieran Lugsden's pass, Andy Thorpe drove a shot just wide (22 mins). Next some good work from Tooth fed Kieran Lugsden for a shot from the left into the side-netting but a St Helens free-kick had been awarded in any case (25 mins).

Timms was lucky that a mis-kicked clearance did not go to the opposition as St Helens got forward but Douthwaite covered Rigaux well to see off any danger. At the other end, Collins shot wide from a build-up by Thorpe and Kieran Lugsden. But Thorpe was suffering with a leg injury and had to give way to Stuart Cook (33 mins). Soon, from a poor clearance by Short, Cook got in a cross which Lunt almost turned in to the net at the back post (39 mins). Then Collins went close, too, but the ball came out to Lunt who hooked the ball narrowly wide (40 mins). With Alty's one-goal lead looking a poor reward for their first half performance, things got worse when they conceded an equaliser after 42 minutes. St Helens won a free-kick to the right of goal some 25 yards out. As the ball came into the Alty box, Priestley rose unchallenged, 12 yards out, to head past Timms, who had remained on his line.

From the re-start Alty won a corner on their left but Douthwaite's flag-kick ended with a St Helens free-kick. Then St Helens almost scored again when a free-kick from the right led to the ball going across the Alty goalmouth and Kelvin Lugsden had to use some smart footwork to avoid scoring an own goal as he stepped over the ball as he ran towards his own goal-line. There was also time for a free-kick by Adair, from the left of goal, but this missed the target comfortably (45 mins). 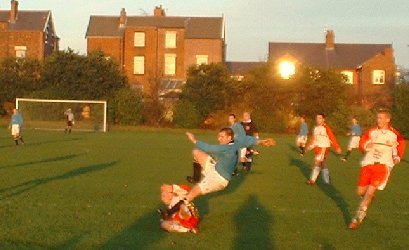 Right: Stevie Taylor gets in a shot, after 70 minutes, as the sun sets

After Tooth had seen off Melling's early attack, a misplaced Altrincham pass led to a St Helens corner on the left, awarded much to the annoyance of the Alty team and especially of Ashley Timms, who got booked for his protests. Stevie Taylor continued to work hard in midfield but the next attack came from the home side but was seen off by Kelvin Lugsden.

Alty's first corner of the half came when Lunt got on the end of a punt from Timms (65 mins). Aktrincham now stepped up their game and a Cook shot soon followed but it was blocked. Another Alty corner came along shortly afterwards and then Taylor got in a fine drive from the left which went narrowly wide (seen right, 70 mins). Another Alty corner was won as Altrincham now dominated the game. From their next attack the keeper punched clear but both Priestley and Kieran Lugsden emerged injured from this incident (75 mins).

A badly-timed tackle from Taylor earned him a booking (81 mins) before Adam Ball came on for Josh Collins (83 mins). Altrincham won another corner which Short punched clear but the ball came back from the right to Kieran Lugsden, to the left of goal. From about 12 yards out Kieran sent a strong diagonal shot past Short to give Altrincham a late winning goal (87 mins).

Seen above, Kieran Lugsden (far right) strikes the winner, 3 minutes from the end.

St Helens finished with two late corners and from the first of these the ball only narrowly cleared the Alty bar. But Altrincham had the last chance when Ball crossed from the right and Lewis's effort was cleared off the line. There was still time for Lunt to head over the bar before referee McGrath terminated proceedings. Altrincham had won the three points deservedly but had left it very late to assert themselves.