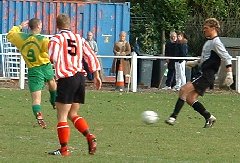 An injury sustained in yesterday's Cheshire County match meant that Adam Douthwaite missed today's game so Jake Lennox came in at right-back after making his debut for the Altrincham FA side last week. Left-back Matt Tooth injured his ankle yesterday, playing for Manchester FA, and had to cry off just before kick-off necessitating a reshuffle, with Andy Thorpe coming into the starting line up on the right of midfield and Kelvin Lugsden dropping to left-back. As well as Lennox, several of last week's Altrincham FA side were making their Altrincham FC debuts and these were Steven Howarth at centre-back, James Monaghan and Paul Lewis in midfield, and Adam Ball, who started on the bench.

The game kicked off almost 20 minutes late due to the late arrival of the match officials. The visitors started well, winning a corner after just one minute and it was not till the seventh minute that Altrincham replied with their own first corner, won by Lennox after build-up work from Thorpe and Kieran Lugsden.

From the corner Kelvin Lugsden's corner looped to McGurgan in the Marine goal. Marine had the better of the opening stages but it was Altrincham who took the lead against the run of play. One of Alty keeper Ashley Timms's trademark long free-kicks was well nodded on by Josh Collins in centre field to Stephen Lunt, who finished well (15 mins).

The goal settled the home side, many of whom had not played together before today. Their next effort was a shot over the bar from Collins from 25 yards and then Lunt volleyed narrowly wide from a good pass by Andy Thorpe from the right (19 mins). Kieran Lugsden was then tripped on the very edge of the box but his brother Kelvin's re-taken free-kick went narrowly over the bar from the right of goal.

After a Josh Collins header had gone wide, Collins played a fine ball forward from the left where Kieran Lugsden evaded the defence to lob Altrincham's second goal from the right of goal (24 mins). Collins then saw another effort clear the bar after 29 minutes as Altrincham exerted their supremacy after their slightly hesitant start. However, soon afterwards, Lennox sliced a clearance over his own bar for a Marine corner which Rimmer headed over the bar (30 mins).

Alty captain Alex Frost was showing no signs of his exertions yesterday in the England Schoolboys' trial game and was settling down to form a good partnership with Steven Howarth, whose powerful heading was a consistent feature of the game. The adaptable Kelvin Lugsden was proving himself comfortable at left-back after playing recent games in midfield or at centre-back.

McGurgan then fielded another Collins header before a foul by Santangelli gave Alty a free-kick in their own half. Timms took the kick and Lennox relayed it from the right flank, inside to Lewis. He, in turn, fed Lunt, further forward and left of goal. Steve found Kieran Lugsden well, with a pass to his right and he finished cleanly to make it 3-0 (38 mins). Rimmer was then booked by referee Shaun Brown (40 mins).

Shortly before the break, Howarth headed well clear from a Marine attack but there was more danger when Millar got past Lennox on the Marine left and forced a superb save, with his feet, by Ashley Timms at the near post (44 mins). Shortly before this Marine substituted the injured McGuire (J.) and brought on Gibbons.

After the first quarter of an hour it had looked as if Altrincham would have a difficult afternoon but by the interval they had established a winning lead, the margin of which was possibly a little harsh on the visitors.

Kieran Lusgden nearly made it 4-0 after 51 minutes when, despite having his shirt pulled, he got round the keeper but could not find the net from an acute angle, right of goal. But then Timms was called into action soon afterwards as he held a 25 yard free-kick from Rimmer (52 mins). Next, Rimmer made a magnificent run up the inside left channel and got the ball across the face of goal but Kelvin Lugsden did very well to clear Summers's shot from the far post off the line for a corner (54 mins).

Marine were now penning Alty back inside their half. Soon Millar, who had a lively second half on the Marine left flank, won another corner for the Crosby side before another Rimmer shot went narrowly wide (59 mins).

But then Long gave the ball away to Kieran Lugsden who took it past the keeper but shot wide (61 mins). However, Marine continued to press forward and hem Alty back. Gibbons got in a good shot, over the bar, before Ball came on for Monaghan for Altrincham (70 mins). From a Collins feed on the left, Kieran Lugsden now glided impressively past Long and Santangelli but his left foot shot just cleared the bar. Ball was soon looking impressive on the left, whilst Cook too was making his mark on the right. Next, from a superb ball forward by Frost, keeper McGurgan raced out 30 yards to head clear.

Collins and Lewis then had shots over the Marine bar before Cook wrapped the game up with a fine goal. He intercepted a misplaced pass and lobbed the keeper from 30 yards, to the right of goal (75 mins). Ball then fed Kieran Lugsden who, via Collins, found Lewis who volleyed home but was offside. Alty now brought on Breidenbach for Collins (78 mins) and soon Spence replaced Summers for Marine (79 mins).

Andy Thorpe then got into the left edge of the Marine box where he was clearly brought down by Kearney. Having won the Altrincham FA game last Sunday with a well struck penalty, Kieran Lugsden this time saw his firmly hit spot-kick well saved by keeper McGurgan, to his right. Nevertheless, ALtrincham were now well on top and playing some good football.

Kelvin Lugsden soon jinked into the box but his shot went narrowly too high. An Alty corner was then cleared before Ball prompted further attacks up the left. Ball's astute backheel then set up Kelvin Lugsden for another shot which won a corner. Another good passing move then saw Thorpe's shot well tipped over the bar by the keeper from a feed by Ball (85 mins).

Timms was belatedly called into action to field a 30 yard effort by Santangelli before another good passing move by Altrincham was stifled by Marine's defence. After Kieran Lugsden had shot over the bar, Marine won a very late corner which Timms caught well (90 mins).

This was an increasingly impressive display by a new-look Altrincham side fielding four debutants in the starting line-up and a fifth on the bench. These two sides meet again next week in a league match at Marine.