100 goals were netted in 42 matches, ten more than the previous season. At the back, 51 goals were let in, compared with 71 in 2011-12. The goals scored were the highest number since 1967-68 when Alty were in the Cheshire County League. The first half of the 2012-13 campaign yielded 48 goals, whilst 52 arrived in the second period of the season. It was in defence that the major improvement was witnessed; after conceding 11 times in the first four matches and 32 times by the halfway mark of the season, only 19 more goals were let in during the second half of the campaign.

Below is Alty's league record since 1998-99. The 2009-10 season shows both the full record, including the expunged games against Chester City, and the official league record. For Alty's historical league record (excluding play-offs), click here

Despite continuing bad luck with injuries, Simon Richman had a fine season for the Robins. Here, Gavin Rathbone of GR Photography captures Simon in action during the home game with Bradford PA.

Altrincham continued the process of the previous season of bringing youth team players into the squad. No fewer than five current youth teamers (Bullen, Mooney, Riley, Samberg, Weatherby)figured in a first-team league squad in 2012-13, whilst three previous graduates also did so (Grimshaw, Reid, Watmore).

For the first time in many years, apart from keeper Jamie Greygoose, not a single player who joined the club (as opposed to being a fixed-term loanee) in 2012-13 left the club during the season.

No fewer than 20 players who had never previously played for Altrincham's first team were named on a league or cup team sheet this season. Only four of these never got on the pitch (i.e. keepers Bullen, Greygoose and Samberg, and defender Alex Weatherby), so 16 Alty debuts were made this campaign.

It was the best season for more than a decade in terms of league "doubles", with six being completed - over FC Halifax Town (5th later promoted), Harrogate Town (6th), Boston United (16th), Corby Town (20th), Droylsden (21st) and Hinckley United (22nd). Altrincham also beat Brackley Town twice but also lost to them twice; the teams having clashed in the play-offs as well as during the normal season.

Alty had a better year in the national cups; they reached a First Round Proper replay against Burton Albion in the FA Cup and the First Round Proper of the Trophy. However, their performance in the Cheshire Senior Cup was poor, a weakened side losing 0-4 at home to Congleton Town in the first tie played in that competition. 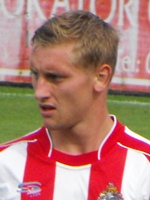 Whereas Damian Reeves's 44(+1) appearances was the best record in 2011-12, in 2012-13 there were two players who made 50 appearances. No one played in every league game, though Coburn and Reeves would have done had they not been rested for the play-offs in the last match of the scheduled season against Droylsden. As Stuart said at the time, "Lee has decided to rest his two best players"! In fact, there were 13 players who made 40+ appearances underlining the stability of the squad.

The only players named in a league squad who did not make a league or cup appearance were four goalkeepers Collister, Greygoose, Bullen and Samberg, and defender Weatherby.

In 2012-13 Altrincham hit 100 league goals, plus 2 more in the play-offs. This was their best total ever in a league within the pyramid structure.

For the third successive season Damian Reeves was top scorer, with 36 league goals and 5 in cups, making 41. This compares with his total of 44 in 1011-12, all in the league. Had he not missed six penalties, he would have had 49 goals (he converted one missed kick from the rebound). Duncam Watmore's 14 goals made him the highest runner-up goalscorer. LANDMARKS

Alty started the season with just seven players who had previouly made 20+ starts for the club; by the end of the season 13 had done so.

League goals were scored fairly evenly through the 90 mins this season. Fifty goals were scored in first-halves and 52 after the interval. The quietest spell in games were the opening 20 minutes when just 14 goals were scored. The most likely time for Alty to score was in the 31st-40th minute period, when 17 were netted.

56 yellows and 2 reds were shown to Alty players in 44 league games compared with 49 yellows and 3 reds in 42 league matches the previous year, when Alty won the Fair Play award. The two players sent off in 2012-13 were Simon Richman and Shaun Densmore.

Danny Hall and Luca Havern saw 7 yellows in the league with Hall picking up another in a cup game. The best behaved, apart from Stuart Coburn, was Duncan Watmore, with no cards in 46 appearances in league and cups.

Alty's longest run of successive league wins was six, whilst the worst run of defeats was three. They had two runs of eight games in the league without defeat, each comprising six wins and two draws. Alty failed to score on six occasions but endured just two goalless draws.