Above: The season started in August at Stevenage Borough..

After two eventful ends of season, qualifying for Conference North by the skin of our teeth in 2003-04 and then unexpectedly gaining promotion to the Conference National Division through the play-offs in 2004-05, the season of 2005-06 was to prove even more tense. Having magnificently defied the odds, as a part-time side with the lowest budget in the division, to finish 18th and safe from relegation, Altrincham were savagely docked 18 points for the playing of James Robinson in 14 games after he had been signed from Accrington Stanley, who had not gained international clearance for him. An appeal to the FA was dismissed on 23 May 2006 and Alty looked destined for demotion to Conference North. But on 3 June the Conference AGM demoted Scarborough for financial reasons and Altrincham stayed in Conference National - but remained with the stigma of officially being placed bottom of the table with just 23 points when they actually won 41 points on the field of play.

A sad note was the absence all season of both the team captain Eddie Hussin, following a cruciate ligament operation, and of midfielder Richard Norris, who was injured in the last pre-season friendly and also underwent surgery. 2004-05 season's second leading scorer, Marcus Hallows, also missed the whole of 3005-06 after a bad leg fracture.

It was a bad season in cup competitions, with Altrincham having tough away draws and going out of the FA Cup and Trophy at the first hurdle. In the Cheshire Senior Cup, of which they were the holders, they did win at Woodley in their first game but succumbed to Crewe in the next round.

Off the field, the club's Board continued its excellent work and aided by the supporters' trust, STAR, it chipped away steadily at the inherited debt whilst keeping within a sensible budget for the year.

Below is the record for each half of the 2005-06 season. One curious feature was that in all 10 defeats in the first half of the season, Alty failed to score. Goalscoring improved later in the season but in the last third of the campaign Alty took just four points.

* Alty's deduction of 18 points reduced their total to 23 points and sent them to 22nd and bottom place.

32 players appeared for Altrincham in league or cup games in 2055-06, one fewer than in 2004-05. Of these 32, all but Richard Acton played some part at least in a league game. Richard's only appearances were in cup matches, though he was 7 times on the bench in the Conference as an unused sub.

Alty did the league double over only one team, Aldershot Town, in 2005-06, compared with two "doubles" in 2004-05 (Stafford and Gainsborough) and four in 2003-04 (Droylsden, Runcorn, Whitby Town and Radcliffe Borough). Whereas nobody at all did the double over Altrincham in 2004-05, five clubs beat Alty twice in the league in 2005-06 (Accrington, Halifax, York, Burton and Woking - all top eleven finishers). Alty lost just 5 games to teams finishing in the bottom half of the table.

In 2005-06 Alty were knocked out of the Trophy and FA Cup at the first hurdle whilst lasting only two rounds in the Cheshire Senior Cup, so only played 46 competitive games whereas they played 59 competitive games (45 league and 14 cup) in 2004-05 and to 54 (44 league and 10 cup) the previous campaign.

In 2005-06 nobody who was used as a sub failed also to make a first-team start though Lee Hendley came closest having made four Conference sub appearances and no league starts but he did start a cup game, so his total was 1+4 appearances. Three others started only one Conference match (Chris Butler, Kieran Lugsden, Pat McFadden) but Kieran and Pat also made 26 and 5 sub appearances respectively. Taking league and cup matches together, those who started just one game were Chris Butler, Lee Hendley and Pat McFadden. One player was named in the first-team suqad but never played, goalkeeper Chris Cloherty.

A pleasing aspect of 2005-06 as in 2004-05 was the continued emergence of players who came through the youth team and/or the newly re-formed Reserves. Regular members of the first-team squad to have graduated through the youth and reserves were Kieran Lugsden, Lewis Chalmers and Lee Hendley, whilst Pat McFadden forced his way into the squad from the Reserves.

Altrincham netted 20 first-half league goals and 20 in the second half, compared with 2004-05's totals of 27 first-half goals and 43 second-half in the league and 2 extra-time goals in the play-offs. Five goals were scored in added time either at the end of the first half (twcie) or after 90 minutes (3 times).

League game goal times are shown below. 2004-05 totals are shown in brackets:

James Robinson played the most games 8+6 without getting booked.

Whereas Alty finished the 2004-05 season with a run of just one defeat in 11 matches, in 2005-06 they won only one of their last 13 league games, picking up just 5 points out of a possible 39 in these games. Strangely that disastrous run-in came after Alty had won three games on the trot for the only time all season, in January/February. The worst run of consecutive defeats was four, the last four games of the season. 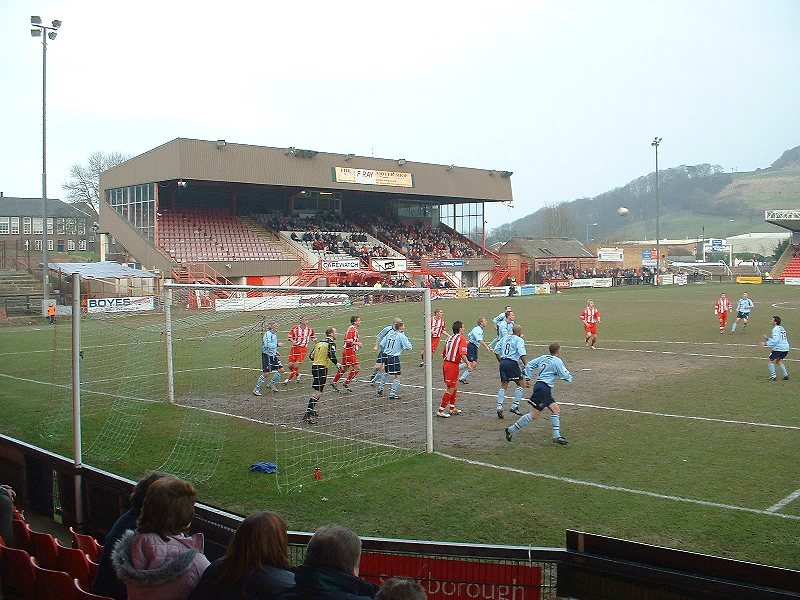 Above, one of Alty's away wins was at Scarborough in February, 2006