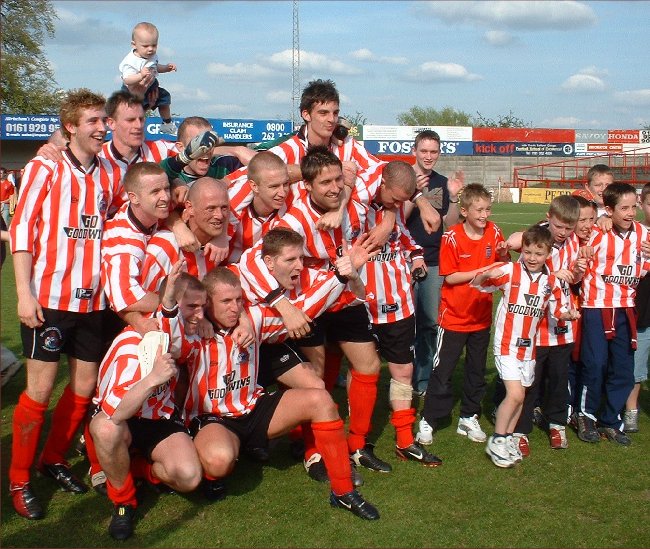 A successful campaign ends; celebrations after the Runcorn game in April.

Season 2003-04 saw Alty finish twelfth, an improvement of two places on the previous campaign and enough to qualify for the new Conference North division for which 13th was the cut-off for automatic inclusion. The season started with numerous draws - there were 7 in the first 10 games. Curiously after draw no.13 in match no.23, there were only 2 more draws all season as the second half of the season was marked by short sequences of wins followed by short runs of defeat. The low point was in September 2003 when Alty dropped to 22nd but the high spot was in March 2004 when 8th was achieved. However, a wave of injuries made eventual qualification for an automatic place in Conference North a close run thing, only clinched on the last day of the season.

Here are some more statistics from 2003-04. For even more see the Statistics Page:

Alty did the league double over Droylsden, Runcorn, Whitby Town and Radcliffe Borough in 2003-04. Only two teams did the double over Alty this season: curiously they were the top and the bottom finishers in the division - Hucknall Town and Wakefield & Emley. For Emley it was the third successive year they had done the double over us! Alty did not beat any of the bottom three this season, taking just 3 points from a possible 18 against these teams.

Nobody matched 2002-03's briefest appearance of the season - Tony Cullen's unmemorable three minutes of added time at Accrington. Those making the fewest appearances in 2003-04 were:

Leading scorers in all competitions:

Apart from in shoot-outs, Alty scored five penalties- all in the league and all converted by Steve Aspinall. Alty netted 9 penalties, (8 in the league) in 02-03, excluding penalty shoot-outs and scored 12 in 01-02.

Alty had the 5th best defence in the League in 2003-04 (10th last season); they conceded 51 league goals (63 last season). 13 league clean sheets were kept, one fewer than last season but three goals or more were conceded in only 4 games (10 in 02-03). Nobody scored 4 against Alty in the league this season; 5 teams did so last season.

Gary Talbot got 2 reds yet only 1 yellow all season! This recalls 2003-03 when Gary Scott picked up 2 red cards but only received 2 other yellow cards all season in 44 games. Equally oddly, Chris Adams got one red in 01-02 but otherwise was never booked in any of his 27 league or cup games that year and almost repeated the feat in 02-03 when he picked up 1 red and just 1 yellow in 36 starts.

The "serial" offenders in 2003-04 were Mark Maddox with 8 yellows and 2 reds, Steve Aspinall (9 yellows) and Barry Shuttleworth (6 yellows, 1 red). In 2002-03 Mark picked up 11 yellows. Only two players made 10 or more league starts without getting booked- Jamie Baguley and Stuart Wright.

Alty's longest league run without defeat in the league was six games (games 15 to 20, 3 wins and 3 draws). They won 4 games on the trot in January/February and in March. Their worst league run was six games without a win (March/April 04). The worst run of defeats in the league was four (games 37 to 40) and three (twice). They started the season with three successive draws, a feat they repeated in both September and November.