PLAYER OF THE YEAR 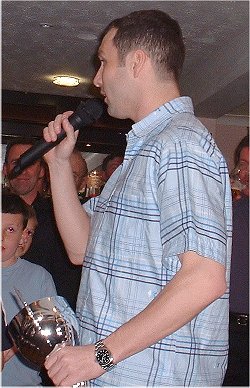 Other players to receive awards were Colin Potts, who received the Outstanding Contribution to the Team award, and Eddie Hussin (3rd) and Stuart Coburn (2nd) who were the runners-up for Player of the Year. Mark Maddox made a presentation on behalf of the team to the Altrincham Board of chairman Geoff Goodwin and directors Grahame Rowley and Andrew Shaw.

The awards took place during a Race Night admirably compered, as usual, by Toni and her youthful helper, Mr George Heslop. The final race involved the auctioning of the competing horses and a consortium of supporters from the Golf Road End dipped very deeply into their pockets to sponsor three horses. It was only fitting that one of these romped home in the race and the Golf Road lads then made the extremely generous gesture of donating their Ł155 winnings straight back to STAR and the Football Club. Well done to all concerned!

Steve Foster has worked hard for weeks raising funds through his Treble Chance competition and this was won by "Rafo", Moss Lane's very own matchday announcer. Much work was also put in by the other STAR committee members who are all to be thanked for their great efforts, whilst Jenny Heslop and Helen McGuire who had run the bar non-stop since well before the match kicked off at 3pm received a well deserved round of applause.