Matches on Saturday 31 March , "This coming Saturday Hinckley United host Vauxhall Motors and the fixture has taken on even more of a `six-pointer` tag after the Knitters were beaten by mid-table Solihull Moors on Monday night... The home side were only able to hold onto that lead for 2 minutes as a long free-kick was met by unmarked Stuart Pierpoint and he glanced a headers past Dan Haystead.... Indeed, had it not have been for the excellent Haystead – later made man of the match – Hinckley would have been out of the game much sooner... In the end Solihull fully deserved their victory."

More on this comes from the Nuneaton News, which says that "Hinckley United’s home form is now becoming quite a worry... with just two wins on their home patch this year... This defeat leaves two points above Vauxhall Motors and defeat on Saturday against them will see Hinckley drop into the relegation zone again

The latest news from Droylsden is of a "new signing, Alirou Nsangou, a forward/midfielder, ex Polish club LZS Piotrowka."

ANOTHER ANDY SIGNS - ON STANDBY

Altrincham FC have signed Scottish-born defender Andrew Milne, who enjoyed a loan spell at Moss Lane in 2010-11. He came to Alty on a one-month loan from Barrow on 14 October 2010, which was later extended to three months. His signing of BSBN forms now is as a stand-by measure, whereby Andy will be eligible to play for Altrincham but will only do so if there is a player injury crisis.

Since leaving Moss Lane, Andrew has been with FC Halifax Town and then his current club, Ossett Town. His careeer started out at Leeds United from where he went on loan to Darlington in 2009-10, but an injury in only his second game disrupted his progress there. He was released by Leeds and joined Barrow from where he had a loan spell at Gainsborough Trinity

Andrew was born on 30 September 1990 (age 21) and has Scotland under-18 honours. It will be remembered that he scored the winning goal for Altrincham against Rushden on 8 January 2011 but, after playing 10(+1) games during his loan at Moss Lane and his subsequent release from Barrow, Andrew opted to move on as travelling from his home in York made playing for Altrincham difficult in terms of travel.

Altrincham's next two away trips are to grounds where they have never previously played a league game. On Wednesday, 28 March, Alty are away to Corby Town, a club they have played in the FA Trophy but not in the league before. In any case, Corby have since moved to a new stadium, so it truly is a "new ground" for those who like to record such visits.

On Saturday 31 March, Alty are away at Nuneaton Town. Of course, Alty have had numerous battles with Town's forerunner club Nuneaton Borough in the league and other competitions, but they have never played Town. However, Alty did visit Town's current ground at Liberty Way in December 2007, when they lost 2-1 to Borough in a Setanta Shield match. Altrincham threw that game away in the last few minutes with Boro' substitute Brian Quailey netting in the 86th and 92nd minutes.

TASC is planning to run coaches to both matches so please get your name on the list as soon as possible. You can ring the club on 0161 928-1045 to reserve your place. Details of pick-up times and fares are on the Away Travel page. 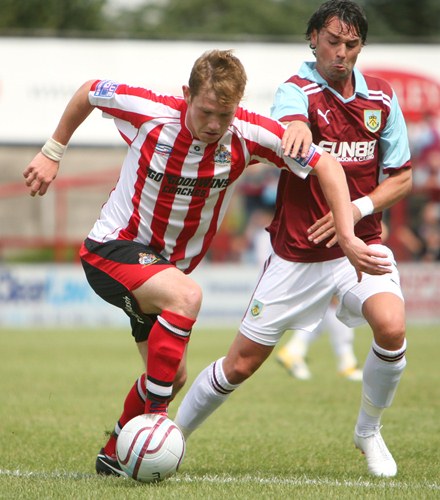 Altrincham FC is pleased to announce its first pre-season friendly for summer 2012, which will be against a Burnley XI. Championship club Burnley came to Moss Lane last summer and manager Eddie Howe kindly selected a high quality side, which included Tyrone Mears, Chris Eagles, Jay Rodriguez and Chris Iwelumo. The game will be on Saturday, 21 July, so please put the date in your diary now!

Pictured, right, by Gavin Rathbone, is Shaun Densmore, competing with Chris Eagles in the match against Burnley at Moss Lane last summer.

The Altrincham FC Youth team plays in the NW Youth Alliance Premier Division for which the current league table is here. Next week Alty are away at New Mills.

A report on yesterday's win over Curzon Ashton can be found on the Youth Page, along with George Heslop's report on last week's win at Morecambe.

NL Daily confirms that "Boston United have parted company with experienced striker Leon Constantine. The 34-year-old played his final competitive game for the club in Tuesday evening’s Lincolnshire Senior Shield final against Grantham Town. He scored once in three starts and eight substitute appearances for the Pilgrims".

Following Saturday's game, the Herts & Essex Observer reports that Bishop's Stortford "pulled off a fantastic win when they triumphed at Altrincham... Bishop’s Stortford’s victory was the second over the Cheshire side after the former had beaten them 1-0 two weeks ago at Woodside Park. The win was also impressive as it came against a team which has ambitions of getting into the play-offs.

Stortford went ahead in the 32nd minute. Dwight Gayle tucked in a rebound from eight yards after home keeper Stuart Coburn pushed out a shot from the left by Ricky Sappleton. The visitors doubled their lead in the 51st minute. A long kick from Stortford keeper Jordan Archer saw Sappleton exploit hesitant home defending to shoot home from 10 yards. Gayle then missed a great chance to put Stortford further ahead from the penalty spot on 87 minutes.

He was fouled in the box but his spot-kick was saved by Coburn and the ball was cleared away". 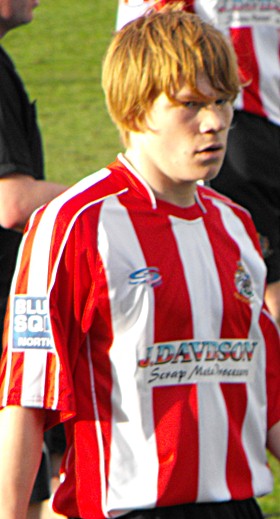 Right: Duncan Watmore was the one bright feature in Altrincham's performance yesterday.