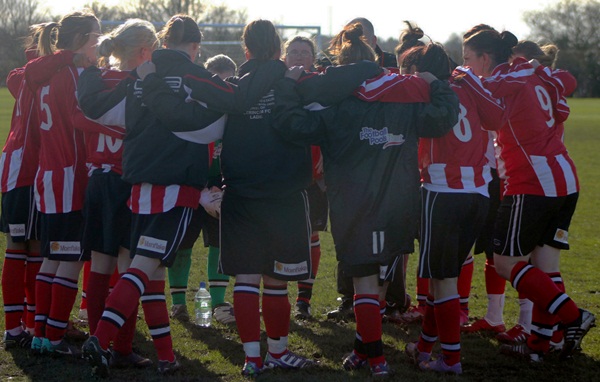 It was a great weekend for the Ladies' first-team as we hosted Sandbach United FC Ladies at Manor Farm, It's always a good game when we play each other and this match followed, true to fashion, as both teams played out an entertaining 90 minutes for both sets of supporters to watch.

As in previous weeks when we have played well, the goals haven't materialised from us either because of hitting the woodwork, good defending by the other teams or just not quite putting the right finishing touch to hit the target. Having said that, this week was going to be an exception, with Maya causing their defenders a lot of problems from our left wing. After, maybe, an even start, our first goal came on 37 mins when she beat a defender and crossed the ball into the box, only for another defender to get in the way and divert it over the outstretched hands of the Sandbach keeper and into the net.

Well, it was then like a bus and, when one comes, inevitably you get another arriving at the same time. So, on 43 minutes, Maya again hit a shot from just outside the box only for it AGAIN to hit a defender and send it the opposite way to which the keeper was diving! We couldn't believe our luck.

The second half started quite evenly, with both teams attacking, and on 51 minutes Sandbach pulled a goal back, only for Faye to make it back into a two-goal cushion on 57 minutes with a cracking shot from just inside the area.

Well, our tails were well and truly up now and the belief in the players was evident for all to see with them being more confident on the ball and eager to try different things. On 61 minutes, Faye again scored to make it 4-1, followed on 73 minutes by a stunning strike from Natalie to make it 5-1.

The game's pace then slackened off a touch, with Alty taking the foot off the pedal, and Sandbach scored from a corner to make a final winning score of 5-2.

I was very pleased with our performance today and it really does bode well for the future....UP THE ALTY!!"

Jack Redshaw made his Morecambe debut on Tuesday night, coming on for the final half hour as Morecambe lost 1-2 at home to bottom club Dagenham & Redbridge. Kevin Ellison scored The Shrimps' goal.

The Altrincham FC Saturday Yankee produced five winning Trebles last week, each code holder winning £40. But both the £5,000 jackpot and £2,000 reserve jackpot remained unwon as the winning sequence of 3546 was unissued.

News of Alty's next opponents comes from BSB North which tells us that "Histon manager David Livermore has revealed his side almost missed out on signing striker Dan Holman last summer. The Northamptonshire-based forward has been a revelation for the Stutes this season, netting an impressive 19 goals. However, Holman may have been playing his football at Evo-Stik Southern League Division One Central side Daventry Town instead.

Livermore told Cambridge News, 'Howard (Wilkins), our club secretary, put us on to him and we had him watched last season before he came and played in a trial game. The first bit of movement he had was a fantastic run in behind, very direct, and the team he was playing for nearly scored. And the next time he got the ball he headed it in. We knew we had to get him back in pre-season and, to be fair, we almost lost him to Daventry. They put an offer in that he was considering because he lives over that way. Between me and Brian (Page, assistant manager) we managed to persuade him to come here for pre-season and he realised this was the right place for him'".

News of Histon's last game (v Colwyn Bay), came before kick-off from the North Wales Weekly News. "Histon, who have been in decline since finishing third in the Conference Premier three seasons ago, have rallied in recent weeks under manager David Livermore. They have lost only twice in their last 11 games to pull clear of the relegation zone and had an excellent 2-0 away win at Corby Town last weekend with top scorer Dan Holman taking his season's goals tally to 19. 'They have changed their style a bit since we beat them at our place (in September) and, for me, they are in a bit of a false position in the table (14th), because they are better than that', warned [Bay manager, Jon] Newby".

"Bay kept a clean sheet and took a good away point at in-form Histon... with better finishing the Seagulls could have taken all three points... Rob Hopley... got the ball in the net from Jon Newby's deflected cross, but the goal celebrations were cut short by a linesman's flag for a debatable offside decision.... Newby [said], 'I thought the goal was good... It wasn't the best of surfaces to play good football on, but we said beforehand that even if we didn't win it was important to keep a clean sheet and we did that... It is another point in the bag and I think 45 points at this stage is a very good haul in our first season at this level and with the small squad we have'".

So, for the second week in succession, Altrincham will meet a side on a good run of results.

Pitchero Non-League reports that "AFC Fylde have signed vastly experienced striker Lee McEvilly from Colwyn Bay. The Bootle-born 29-year-old joins the Coasters for the remainder of the season, despite interest from a number of other clubs higher up the non-League Pyramid".

According to Pitchero Non-League, "Boston United`s striker Tony Edwards has sealed a loan move to Quorn. The 24-year-old, who made his Pilgrims' first-team debut in December against Stalybridge Celtic, has linked up with Lawrie Dudfield's side on a short-term basis. Edwards...has netted nineteen goals and four hat-tricks for United's reserves this season".

"Corby Town have signed midfielder Tyron Amory, who last played for Barwell" reports Pitchero Non-League. "Fitness instructor Amory failed recently in his bid to win a professional football contract with Swindon Town. The personal trainer from Solihull made the final stages of a nationwide contest to bag a deal with Paulo do Canio’s side, [which was won by Jordan Pavett, who scored against Alty for Bishop's Stortford, last Saturday]. But he just failed to clinch a contract. He beat more than 5,000 entrants to reach the last four of the competition... The 22-year-old has earned a consolation prize of a semi-pro contract at Corby after impressing scouts during the contest. Originally on the books at Derby County, Amory went on the represent Atherstone Town, Bedworth United and Barwell before trying out at Swindon".

On Tuesday, Guiseley reported that the Lions "head into tonight’s fixture with Farsley FC on the back of two consecutive defeats as they look to return to winning ways and reach the West Riding County Cup Final. Steve Kittrick’s side have only suffered consecutive defeats on one other occasion this season, back in September, and he will be keen that his players don’t lose three on the bounce.

The Lions are the current holders of the WRCC... Farsley’s predecessors, Farsley Celtic, won the competition in the 2005/2006 season [when Lee Sinnott was boss]... The Lions will be struggling to field a team as an injury crisis has emerged at Nethermoor; Gavin Rothery (broken toe), Mark Bower (torn calf), Andy Holdsworth (broken toe), Ciaran Toner (ankle ligaments), Simon Baldry (hamstring), Simon Ainge (knee), Jamie Clarke (back) and Danny Forrest (calf) are all ruled out or doubtful.

Farsley boss and former manager of Guiseley [and ex-Alty player], Neil Parsley, will be relishing the opportunity for his side to spring a surprise on his return to the Nethermoor".