The Sale & Altrincham Advertiser reports that "Altrincham manager Lee Sinnott is hoping swift summer transfer activity will help his new-look squad hit the ground running in their Conference North promotion campaign. Sinnott has been busy in the transfer market since taking over in May, adding five new faces ahead of his squad’s return to pre-season training on Thursday.

The 45-year-old manager believes he is just 'two or three' signings away from a squad capable of a promotion push and hopes to add more pieces to his jigsaw ahead of the first pre-season game against Burnley on July 9.

He said: 'We always wanted to get our business done early and hit the ground running and we’re happy with the business we’ve been able to do so far. There are still a couple of positions we’re looking at, primarily a centre-half and maybe one or two forwards, but the squad is shaping up. Of course, we’ll be looking at the youth team as well and I think it’s important for any club to do that. There were a couple of the younger lads involved at the end of last season and it’s important to keep giving them the opportunities.

Coming in after a relegation you know you’re going to be lucky if everyone wants to stay, and a few players have left us, but getting their replacements in early gives us the chance of getting a good pre-season behind us going into the first league game on August 13'.

The Advertiser also tells us that "Lee Sinnott is looking forward to finally putting his new-look Altrincham squad through their paces five weeks after taking charge at Moss Lane. The Robins will face a full-strength Burnley side in a tough start to their pre-season campaign, before taking on a Manchester City XI, Buxton, Tranmere Rovers, Trafford, Barrow and Stockport County.

After weeks of managing the comings and goings from the Moss Lane dressing room in the wake of Alty’s relegation from the Blue Square Premier, Sinnott is relishing the chance to get back out onto the pitch. He said: 'It’s felt like a long wait, a lot of my work has been done over the telephone since I arrived, assembling the squad and assessing which of the current players will be staying. As a manager, you always look forward to being able to get your squad together and start preparations out on the training pitch as it’s a very important time of year.

Pre-season is there for a reason and we’ll be looking to learn and assess with each game and make sure we’re fully prepared ahead what will be a tough league campaign'.

Altrincham have cancelled their pre-season friendly against Woodley Sports on July 12 after Sinnott decided he wanted his players to have more time on the training ground. The cancellation gives the Robins squad a full week between games with Burnley and a Manchester City XI, time Sinnott believes will be valuable after facing Eddie Howe’s Championship side. He said: 'Burnley will be bringing their first team which will be a very, very big test for us as they are a real quality side. We will have had four pre-season sessions by then and, as much as you don’t want to have to cancel games, I felt it would benefit the squad.

The schedule has us playing, Saturday, Tuesday, Saturday, Tuesday for most of pre-season and I felt it was important to spend more time on the training ground to work things through with the players before we get into the thick of those games'.

With Alty’s Blue Square North fixtures set to be announced on Tuesday, Sinnott already has one eye on August 13 – the start of his side’s league campaign. The Robins have been named second favourites to win promotion from the sixth-tier, a feat Sinnott achieved in 2007 with Farsley Celtic. But his experience at this level gives the former Port Vale boss reason to be wary of the favourites' tag. He said, 'Altrincham are one of the prestige names in non-league football and I think we will be a scalp for other clubs in this league so we will have to be strong. I think the players might find they have less time on the ball than last year and teams certainly won’t be rolling over for us. But we’ve got to impose our own style on the other teams and dictate the pace of the games, and we’re all looking forward to the challenge'". 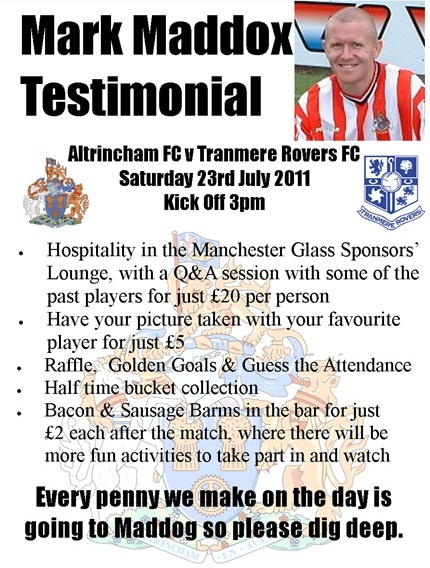 Parry was quick to respond after being told the pre-season friendly had been earmarked as the centrepiece of a tribute day to raise funds for one-time Tranmere junior Maddox, in the wake of his recent diagnosis with motor neurone disease.

'I was extremely sorry to hear about Mark, and I know I speak on behalf of everyone at Tranmere in saying we want to do everything we can to help make it a special day for him,' said Parry. 'You can rest assured, I'll be bringing a full-strength line-up, the one that will be starting in League One a few weeks later.

'The chances are, it will include Dale. Bayern are genuinely interested in him, but, at the current rate of progress, I can see him still being a Tranmere player, come July 23. If so, Moss Lane will get the chance to see why he is so highly rated, because he will be playing.

'I have been hearing a lot about Mark from Warwick Rimmer, who brought through players like Ryan Taylor, Jason Koumas and Iain Hume as head of youth development here. Warwick is 70 now, and only part-time, but he remembers Mark clearly.

'It's a terrible thing to happen, especially at such a young age, but it will be something if we can at least play a part in making the day a resounding success. I'm going to make sure the game gets maximum publicity in our local papers to drum up as big an away following as possible. I really hope there is a bumper turnout.'

Alty have produced a poster (right), outlining a range of special attractions for the day, with all the proceeds going to Maddox and his family, including hospitality packages in the Manchester Glass sponsors’ lounge at just £20 each. Details are available from the club on 0161 928 1045".

The hospitality mentioned in the adjacent poster is available before the match, at 1.45pm, in the Manchester Glass Sponsors' Lounge.

The Liverpool Daily Post confirms that "A transfer taking Tranmere’s teenage prospect Dale Jennings from Prenton Park to Bayern Munich could be completed within the next few days. The Bundesliga giants are moving closer to agreeing a deal for Jennings, after more than a month of negotiations with Rovers.

Bayern are understood to be ready to pay an upfront transfer of £500,000 plus add-ons based upon appearances for the 18-year-old from Liverpool, who burst out of Tranmere’s youth and reserve set-up and onto the first-team scene in spectacular fashion last autumn. The Germans had originally wanted to negotiate a modest fee with the deal’s emphasis on further payments based on appearances. But Rovers, who turned down a £600,000 offer from a Premier League club for Jennings during the January transfer window, have been insisting on a significant upfront payment.

Bayern representatives were among the dozens of scouts who flocked to Prenton Park during October and November last season to assess Jennings. The youngster’s exciting performances earned him recognition as League One apprentice of the year at the Football League Awards. Injuries and a dip in form limited Jennings’s impact in the second half of last season but even so, he finished the campaign with six goals in more than 30 first-team appearances under his belt. Jennings has another year of his Tranmere contract left to run, and whether he departs or not, manager Les Parry will be looking to add a number of new faces to the squad for the new campaign.

Tranmere are due to start pre-season work a week tomorrow when they commence five weeks of preparations for the opening League One fixture against Chesterfield at Prenton Park on Saturday, August 6. Rovers will be playing their part in supporting Altrincham’s former skipper Mark Maddox when they play a friendly at the Moss Rose [aagh!] on July 23. Maddox has been diagnosed as suffering from the life-threatening Motor Neurone Disease.

Altrincham have designated the Tranmere fixture as a benefit match for Liverpool-born Maddox, 38, who made almost 350 appearances for the club. They plan to host a re-union of Maddox’s playing colleagues, a raffle and auction".

"After the success of phone recycling which raised over £1000 for the Football Club we are now broadening our range of products to include CDs, DVDs and computer games. Please look around your house for unwanted phones, CDs, DVDs and computer games and bring them into the Fooball Club's office. We will then arrange for them to be recycled and all funds raised will be added to Lee Sinnott's playing budget for this season.

This is an ideal way for each and every fan to be able to do their bit to help the club with its fundraising initiatives as well as helping tidy up your home. Regular updates on the progress of the scheme will be posted on the site throughout the season".

Fund Raising: How You Can Help

Following the above, recent, appeal we had a really good response from many supporters, and some great ideas. Thanks to all who responded. We are starting this scheme immediately as we believe it allows all supporters to help and doesn’t cost anything!

We know that times are difficult and not everyone will have much cash to spare to support the club. However, you may have unwanted items about the house that you may like to donate to the club.

We are extending our existing Ebay presence and, in addition to the Club merchandising, we hope to sell football memorabilia, as well as general items such as unused old computers, printers, Play Stations, vinyl records, etc. If you have anything cluttering your cupboards that may have a value to someone else, please email a description (preferably with a picture) to altystar@ebay.com. We will store, advertise, sell, despatch, and promise that every penny we raise will go to the playing budget for next year!

We will publish progress with this idea in the early season programmes next season. Thanks to Tony Chetham for his help with this idea. "

An Alty player who has certainly been keeping fit over the summer is Nicky Clee (right) as Shepley Cricket Club reports on a cricket match with another West Yorkshire club, Marsden on 18 June. "Shepley secured a one-wicket win at Hemplow with two balls to spare in a tense game of cricket. Marsden won the toss and elected to bat on a greenish pitch. The first five overs were maidens and at 9-2 off eleven, it looked a doubtful choice, particularly as Craig Glover (6-76) was taking advantage of the conditions. But gradually the middle order through Chris Coleman (30) and Nicky Clee (61) got Marsden back into the game, allowing Jack Smith (28) and [Nicky's brother] Danny Clee (38*) to get some late runs and a handy total of 204-7".

NL Daily states that "Former midfielder and caretaker boss Kevin Street has returned to Stafford Rangers in the hope of reviving his playing career at Marston Road. Street was the surprise face among the ranks as a much-changed squad reported back for pre-season training last night, in their first session under new manager Greg Clowes".