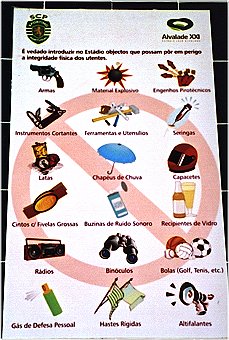 All football grounds, including Moss Lane, have a list of banned items but a recent visit to Sporting Lisbon's Alvalade stadium, the adjacent notice was spotted, which graphically underlines what spectators cannot take in to football matches there. The banned items include guns, explosives, mallets, loud-hailers, syringes, crash-helmets, umbrellas and... tennis balls!

Altrincham FC will be hoping for increased gates next season as they return to the national division of the Conference. By way of comparison, a list of our average league attendances since 1987 is here.

The draw for the early qualifying rounds of the FA Cup is to be made on 1st July. However, this season Alty do not enter till the fourth qualifying round so we have a little while to wait yet before learning our opposition.

The Leigh RMI website says that the club's "supporters' club has agreed to help out on the 16th July for the pre-season friendly visit of FC United of Manchester. This is FC United's first ever game and following a meeting with their committee on Thurs 23rd June they have stated an anticipated attendance of between 4,000 and 7,000 to witness the dawn of a new era... It is expected that up to 10 turnstile operators, 4 programme sellers, half time draw sellers and several chaperones[!?] may be required on the day... Gates may be opening up to 3 hours before kick off". 26 June 2005

Good progress was made on Saturday by the volunteers who turned up to help prepare Moss Lane for the new season. More work was done today but much remains to be tackled before the friendlies start in three weeks time. Moss Lane will be open again on the next two weekends from 10am so if you can spare a few hours, please do come along and help with tidying-up, painting and odd jobs. Work also continues on the pitch with the delivery today of a new roller/drier for clearing water off it after downpours and the spraying of the terraces and pitch surrounds with weedkiller.

Alty are away at Woodley Sports in the Cheshire Senior Cup next season and the Stockport club is one of the first to be laying an artficial pitch after a change in rules to allow this. Although the pitch is not eligible for FA Cup, Trophy or Youth matches, it can be used for other games and Woodley believe they can make more money by hiring it out than they would from FA prize money, according to today's NL Paper. Woodley's pitch cost £320,000 to lay and the club will soon be constructing a £4 million sports complex with backing from two local businessmen.

The Cambridge United "roller coaster took another lurch on Saturday morning when Sports Minister Richard Caborn called key players to his office for crisis talks on Monday. Just hours after we broke the news that a potential compromise brokered by Mr Caborn had been rejected by HM Revenue & Customs, leaving the club pursuing one more option for survival, his office announced that senior representatives from all parties were expected to meet for round-the-table talks on Monday morning... A statement from his office at the Department of Culture, Media and Sport declared: 'There can be no guarantee of success'".

Today's NL Paper debates who might join the Conference National if Cambridge United do not survive. Relegated Farnborough and Leigh RMI reportedly would not accept a place back in the National division and neither would Eastbourne Borough, the beaten play-off side. All cite the extra cost of national football as the reason.

Steve Flitcroft of Accrington Stanley has reportedly joined Barrow, whilst Amos Foweya has left Woking for Lewes where he joins Dwain Clarke, who has left Aldershot. Southport's Lee Mulvaney is training with Stalybridge Celtic.

Woking "announce that they have reached agreement with Yeovil FC on compensation for former defender, Luke Oliver, who joined the Glovers from Woking a few weeks ago. Yeovil have agreed to pay Woking a five figure compensation fee. The terms also include a sell-on clause".

Shotsweb says that "[Aldershot] defender Brett Johnson has turned his back on the offer of a new contract and is on his way to Northampton Town".

"Forest Green Rovers are again running their popular Junior Greens Club which entitles persons under 16 to watch Rovers for as little as £2 per match only, with a single joining fee of £10 per season". Other benefits include 10% discount in the Club Shop and discount on away travel.

The Kidderminster website says that "The consortium bidding to take control at Kidderminster Harriers FC - has announced details of a press conference to take place at Aggborough next... Monday at 10.30am where they have an important announcement to make".

Kettering "manager Kevin Wilson met with two of the players off his new season 'wish list' and... both players involved put pen to paper. First up was the striker, Junior McDougald...[from] Canvey Island".

The Burton Mail says that "Albion boss Nigel Clough has opened transfer talks within hours of returning from holiday... Clough said: "We haven't had much news for our fans yet in terms of new signings. "But... we are only interested in signing quality players". Indeed, "Clough remains confident of capturing Shrewsbury Town skipper Darren Tinson and installing him as Albion's new defensive general. He is also in the market for creative and wide midfield players, a striker and a goalkeeper". Clough added, "I can't think of one single benefit from introducing a transfer window at our level, but we have to abide by it and make provision for it... we may well take one extra player as a precaution".

Cambridge News reports that Cambridge United financial director, Nick Pomery, "admitted the final decision on whether the club survives may now be delayed until Monday. Talks were on-going between Minister of Sport, Richard Caborn, who stepped into the dispute after an appeal from the News, and Treasury Minister, Dawn Primarolo... It is understood the proceeds from the sale of fan Colin Proctor's memorabilia will provide added time for negotiations... Meanwhile, United still have only four professionals signed for next season".

The Stevenage Mercury states that "Furious Stevenage manager Graham Westley has blasted Conference chiefs after his choice of clothing landed the club with a £500 fine. Boro' have been punished after Westley wore his Errea club jersey in last season's play-off final against Carlisle United at the Britannia Stadium, instead of the official Umbro top that all Conference coaches are required to wear during matches... 'It just shows how jealous people are of me and the club and it makes me doubly determined to do well next season'" said the manager.

Morecambe Today confirms that "Morecambe's first team squad return to training on Monday and manager Jim Harvey... said: "Quite a lot of them have been telling me they have been bored and can't wait to get back... The players that we have are particularly fit. They will have been doing training over the summer but we will need to put in the work". In fact, "Carl Ruffer has been one of those training at Christie Park over the summer, as has Michael Stringfellow as the pair look to put horrendous injury problems behind them. ... Sean O'Connor will also be back at Christie Park next week as he continues his long road back from injury".

IC Cheshire reports that Runcorn's "Midfield could be further bolstered by the arrival of Southport prospect Mark Powell on a possible season-long loan... Other possibles are ex-Southport left-back Paul Byrne".

The full Cheshire Senior Cup draw pitches four of the county's five league teams against each other: