Right: At 34, Gary Talbot may be Alty's oldest player but he remains one of the club's fittest first-teamers, having played 50 games this season, a total only bettered by Colin Little. 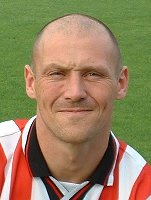