Worksop Today says that The Tigers' "proposal for a Company Voluntary Arrangement, which would help wipe out their current debts, has already been accepted by a number of creditors, including Bassetlaw Council. But the final go-ahead will only be given following a positive vote by creditors at a meeting on Friday... Should the proposal be accepted Worksop Town's slate would effectively be wiped clean and the club would start the 2005-2006 season debt-free. But it would mean a probable 10-point deduction from their Conference North points total this season, and ensure a tense finish to the campaign close to the foot of the table."

On This is Staffs "Stafford Rangers manager Phil Robinson has leapt to the defence of his own rearguard after a run of costly errors put them out of the Nationwide Conference North play-off race. Up until last week, Rangers had the best defensive record in the division, but then conceded eight in three matches and picked up only two points. "The ironic thing is that in these last three games we scored seven goals, consistently more than we have all season, and if we had maintained our defensive capabilities we would have picked up the points we needed" said the boss. Also, "Rangers made a transfer deadline-day swoop for Port Vale's teenage keeper Joe Anyon on loan until the end of the season" but the manager "has ruled out experimental line-ups just for the sake of it in the remaining five league games". Robinson insisted, "I'm not picking anybody for the squad who has not earned it by right".

IC Cheshire reports that "Vauxhall FC are to star in the first episode of a new BBC television show about British life. A Digital Picture of Britain will be screened on BBC Four between late May and early June, and the series aims to take a candid look at various aspects of life in contemporary Britain through the eyes of some of the UK's most prestigious photographers. In part one, Nikon Press Photographer of the Year Dan Chung comes to Ellesmere Port to take a look at both Vauxhall's football team and their connection with the car plant... Chairman Alan Bartlam said: 'We were told that as part of the programme, the BBC were also visiting Liverpool FC and there may be some sort of comparison with ourselves".

Runcorn boss Steve Soley "has challenged his players to atone for an unacceptable performance in defeat at Redditch on Saturday by picking up vital wins in this week's relegation doubleheader. Runcorn entertain second-from-bottom Ashton United at Prescot this Saturday and then travel for the rescheduled game at Lancaster City on Tuesday". Soley said "Saturday's performance was absolute rubbish and I would like to apologise to the supporters for that, especially those that travelled. They let everyone down... six or seven weren't at the races... They've got to say sorry this Saturday".

As for Runcorn's financial plight, "Chairman Dr Dave Robertson will have to let the football authorities know what is to happen. A consortium of Widnes businessmen with building backgrounds is understood to be in the wings and interested in helping to provide new facilities in Runcorn. But... they need some encouragement from majority shareholder Dr Robertson". As for recent signings of Mike McGinn, Alessandro Percovich and Jason van Blerk, manager Soley stated, "People have criticised the three signings but two of them have come for free. I have been told Moor Green's wage bill is £5,500 and ours is now down to £1,400. I have some great players lined up for next season but we don't know if the club is going to be here". A further problem is that "The Linnets will have to find another venue for their last home game of the season against Lancaster City on Saturday, April 30 as their adoptive Valerie Park home is unavailable... All last-day fixtures have to kick off at the same time and the Linnets are unable to re-schedule the Lancaster game for another day... It is understood the Linnets have asked the Conference if they can play at Southport".

The NW Evening Mail reports that "Mark Salmon is due back in England on Saturday but the Bluebirds' captain is unlikely to play again this season. Salmon was expected to play a vital role in Barrow’s run-in on his return from a second spell working in Egypt". Manager Lee Turnbull said, "He’s only home for 12 days... it would only be for one game". Barrow have signed striker Dave Mansergh from Dalton United and Dave Swarbrick from Holker Old Boys".

Leeds Today quotes Harrogate boss Neil Aspin, "The way Bradford played at times [against us] you wouldn't believe they were bottom of the league... They pushed us really close". BPA manager Carl Shutt said on This is Bradford "We hustled and bustled and should have got something from it".

In a local newspaper interview, Runcorn chairman Dr Robertson admitted "There is a sizeable group of our support that would like to see some effort made to create a suitable ground in Runcorn for the team to return to its home... The difficulty is that it cannot be done within a year... I guess that the first proposition would be to secure a potential ground share with [Prescot Cables] for next season... The move away from Widnes has reduced our expenditure quite considerably, but it has not yet solved the problems".

In the Tameside Advertiser Droylsden boss Dave Pace said of their next game, against Stalybridge, "I’m too busy looking at our own situation ­ when you’re top of the league you do tend to look no further down than 12th place... [Southport boss] Liam [Watson] knows I’m a fan of his, so when I win the league, I’ll be the first one in Southport’s souvenir shop so I can buy a scarf and cheer them on in the play-offs". Celtic boss John Reed replied, "It’s a massive enough game at the best of times, but even more so when they are trying to win the title and we are fighting for our lives".

Dave Boddy, chairman of Worcester City told This is Worcs, "If we take six points from Stafford and Altrincham, you have to believe it's possible that we will take maximum points after that".

The following is a statement from Altrincham FC:

Following the game against Hucknall Town on Tuesday night, Mr Gerald Berman signed over his shares to club chairman Mr Geoffrey Goodwin. The Chairman would like to express his thanks to Gerry, along with the other three major shareholders who have done likewise, showing their confidence in the Board to take the club forward.

As most Alty fans will know, Gerry Berman was for many years the chairman of Altrincham Football Club.

Above left: Kieran Lugsden who is now a regular in the squad. (Photo by Gavin Rathbone). Above right: Centre-back Adam Brindle, who has been on the bench often but yet to make an appearance. (Website photo). Gavin Rathbone's excellent photos are available from the club shop or by e-mail.. 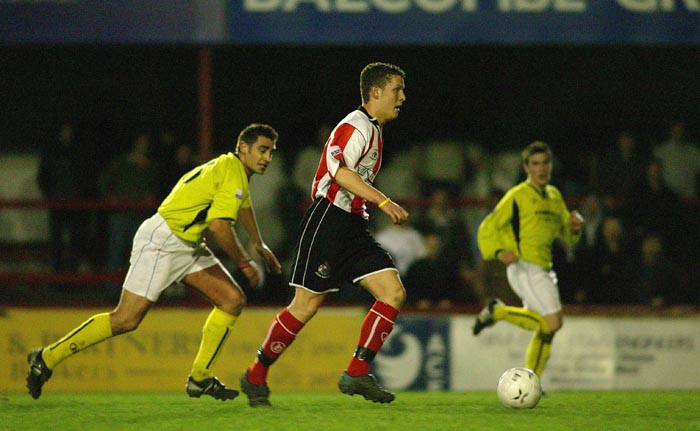 Though they won on Tuesday, Leigh RMI are now relegated to Nationwide North for next season.

Terry Fearns (Southport) was the winner of the Nationwide North player of the month vote for March.

On Tuesday, Anthony Hargreaves (Flixton) and Niell Hardy (Chorley) both scored. Peter Band was an unused sub for Vics. Terry Bowker was sent off for Stalybridge in the GLS Cup.

This is Nottingham says that "a second-string Hucknall Town team gave player-boss Dean Barrick plenty to think about with a 1-1 draw at Altrincham".

The Hucknall Town site says that "From the kick off Altrincham dominated proceedings, but they found it difficult to break down a Hucknall side playing a changed formation of 3 at the back and two wing backs... Several shots by the home side were either well wide of very high of the target, as they struggled to find their range".

Alty Reserves suffered yet another postponement today when the game at Abbey Hey against Bamber Bridge was called off due to heavy rain this morning. 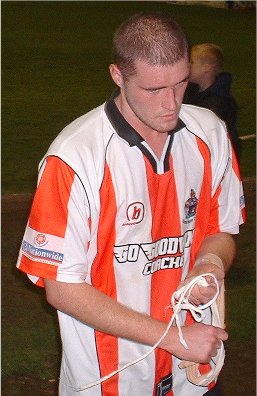 Right: George Melling leaves the pitch after the game.