Alty Youth put on a good performance to beat Woodley Sports 3-1 today, with two goals from Lee Hendley and one from Graham Bryant. Lee has now scored 27 goals this season. Report to follow. 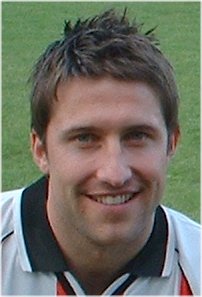 Following the bad injury to Alty striker Marcus Hallows, in today's "Pink", Alty chairman Geoff Goodwin says, "I've spoken to Marcus's wife, who is understandably very upset and I've promised her we'll stand by him by paying his wages through the summer. In the circumstances, it's the least we can do. We'll also be staging fundraising events for Marcus, just as we have for our other broken leg victim Stephen Rose and we're looking into the suggestion that the cash generated by our planned supporters v staff game ... could also be given to him. Marcus can rest assured we'll look after him. We care for our players".

Meanwhile, STAR's Brian Flynn reports that Gary Warrington and his colleagues will carry out a bucket collection for Marcus Hallows at the Easter Monday game against Hinckley United. Brian writes, "Many people will be aware that Marcus's only income during his rehabilitation period will be from Altrincham FC and the Club has already pledged to pay Marcus during the close season. There will be a number of fundraising events over the next couple of months to help Marcus support his wife Emma and their young son Aaron, who has just reached his first birthday... so bring pocketfuls of dosh on Monday!!". Marcus has now been released from hospital with a titanium rod in his leg.

In The Pink, Geoff Goodwin "has heaped praise on Alty's physio Sean Riley and club doctor Richard Parish for the treatment they gave Hallows while he waited over half an hour for an ambulance... 'If it hadn't been for Sean and Richard the people at the hospital say Marcus would have lost his foot. They did an unbelievable job and we are particularly proud of them'".

Altrincham Reserves have five games left this season, all at home. The fixtures are now in the Reserves' section and include several Saturday lunchtime games at Baguley. A report on their last game, a win over Lancaster City, will be on the website later this weekend.

In today's Pink, chairman Geoff Goodwin says of last week's incident after the game at Moss Lane, "Graham [Heathcote] is very disappointed with himself. He realises what happened wasn't good for the club but the fact remains he was severely provoked. The board have refused to accept his resignation... We will not allow these events to destabilise the club. It would have been such a shame if Graham were to have gone after all that's been achieved here in the last couple of years. I've been overwhelmed by the messages of support I've received from our fans since we announced we weren't prepared to let him leave. I feel we're going in the right direction and I'm sure the fans do too. I'm not saying that's all down to me and Graham, though - it's very much a collective effort".

The NL paper has a feature on goalkeeper Ian Senior. It says, "Senior (44) admits the number of registrations he signed totals 40 and even this season he could not resist the call to help out Altrincham by playing in a GLS Cup tie". Ian is still a full-time fireman who also scouts for Wigan Athletic and coaches Lancashire FA goalkeepers but now he "has set up a business selling a whole range of sports gear to teams throughout Britain". His company, Sensports Kits, is "certainly on an even footing with my job as a fireman" said Ian, who now sells Pro Star merchandise to 18 clubs in the NW Counties League and UniBond League. "Last week he finalised a deal to supply Alty next season and he adds, 'The background to me getting most of the business is through having played at these millions of clubs! I've got plenty of contacts... I'm going to see Ashton United this week'".

Niell Hardy netted for Chorley, whilst Steve Tobin scored for Flixton yesterday, whilst Rio Nelson, an Alty Reserve this season, also played for Flixton. Ryan Hevicon turned out for Chadderton and Jamie Baguley for Woodley this week, whilst Lee Thompson netted for Skem, Leroy Chambers for Frickley and Carl Furlong played for Colwyn Bay. The NLP has a picture of Ian Craney scoring this week for Accrington. Two ex-Alty Youth players, Mark Drew, Ben Ashmole and Lee Shillito played for Leigh yesterday, whilst Peter Band and Matt Bailey played for Vics, and Dean Greygoose for Sudbury.

I have received an e-mail from Simon Wright, editor of a West Bromwich Albion fanzine called Grorty Dick (before you ask, it is named after a traditional West Midlands dish), enquiring about Ben Robson, son of Bryan Robson, the Baggies' manager and former Manchester United and England captain. Ben has recently been playing for Altrincham Youth as a right-back. In an interview with Bryan, who still lives in the Altrincham area, he mentions his son's involvement at Altrincham. Indeed, Bryan watched one of the Alty youth games recently. For more, on this see the Youth page. Alty Youth are at home tomorrow to Woodley Sports (2.30pm at Wythenshawe Town FC).

Following their run of twelve unbeaten league games, Altrincham today went down to their fourth successive league defeat and in those games they have not scored from open play. But the Robins were without Aspinall, Hilton, Hussin and Thornley from the starting line-up, as well as the broken-leg victims, Hallows and Rose. In addition, both Scott and Adams were limping from early in the first half so, once again, Alty were well under strength.