On Confguide is a report of a press conference at Stafford Rangers. It confirms that the club is making a loss and has cash flow problems, one of the reasons being that income from attendances is forecast to be £25,000 under budget. It dismisses rumours that the players have not been paid. However, it states that the club has "more contract players than it has had in previous seasons (currently 16 or 17)". However, recently, the players "have been asked to defer certain bonus payments until the club's cash flow problems are resolved". Also "The manager has been asked to save money in respect to non-contract players and backroom staff... The action taken now is a 'preventative measure' to keep the club solvent and running'". Finally, The Supporters' Trust at Stafford is to be encouraged to work with the club.

Hinckley United goalkeeper "Tommy Whittle is now struggling to recover from flu. Reserve keeper Adrian di Gregorio is also injured and unavailable to cover, so as a precaution the Knitters have re-signed veteran Dale Belford as cover from Gresley Rovers... Belford played over 50 games for Hinckley United in their first season... Also returning to the club is Danny Pitham, who in his short spell at VS Rugby Town, has scored one goal for himself and an own goal too. He returns to help out with the central defence injury nightmare", reports the club website.

Barrow manager Lee Turnbull’s "current two-year deal runs out at the end of this campaign and speculation is mounting as to his future at the club... Turnbull has now received the backing of two of his most influential players, stand-in skipper Graham Anthony and experienced defender Scott Maxfield". Anthony said, "What he has done this season has brought through a lot of young lads and with a year’s experience behind them it can only be better for next season". If Turnbull went, Anthony says, "It’s hard to say what would happen. I know Lee has got a lot of players in, but personal-wise everyone loves playing for Barrow and that’s why they travel so far to do so". The NW Evening Mail adds that Scott Maxfield is also backing Turnbull's plans at Barrow for next season, which suggests he may not be going to Stalybridge as has been rumoured.

The Tameside Advertiser reports that "Stalybridge Celtic manager John Reed has admitted the club are trying to keep a deal which will see Aron Wilford remain at Bower Fold... He said: 'Aron’s settled in fantastically and the lad’s made it clear he wants to stay at Stalybridge so it’s a case of trying to make a deal for him because there are people sniffing around him. Andy [Hayward] is a forward missing chances and the only thing in his favour is that he gets on the end of things'". Meanwhile, "Chris Denham, heavily linked with a move to Droylsden over the past few weeks, came off the bench on Saturday and, according to Reed helped turn the tide in Celtic’s favour". Reed stated, "Chris is staying until the end of the season". Celtic have arranged a friendly this Saturday at Ossett Town.

Redditch United lost 0-5 at home to Halesowen Town on Tuesday in the Worcester Senior Cup.

Leigh RMI won their first league game for almost six months at Tamworth and former Alty youths Lee Shillito played , whilst Ian Taylor and Ben Ashmole were used subs. Peter Band was sidelined by injury for Northwich Vics last night. Danny Adams's omission for Stockport County's side last Saturday has prompted rumours on the fans' message boards that his days at Edgeley Park could be numbered.

Alty chairman Geoff Goodwin is supplying STAR supporters' coaches for the away game at Alfreton on 5 February at a discounted rate; adults will pay only £5 and concessionaries just £4. Bookings will be taken at this Saturday's game; coach timings have yet to be announced. 23 February 2005

It has emerged that the linesman whose intervention led to Colin Little's dismissal last night claimed to have seen a "simulated head butt" by the Altrincham player. 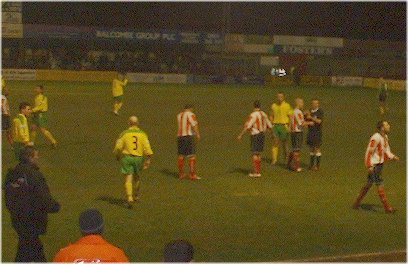 Preston Today reports that goalkeeper "Jamie Speare admits he faces the hardest decision of his career with Lancaster and Southport locked in a transfer tug-of-war for the experienced goalkeeper. Southport put seven days notice in on Speare last week and the Conference North leaders will make a formal offer to the 28-year-old ahead of Saturday's clash between the two sides at Haig Avenue. 'If I make a decision to leave Lancaster it will be nothing to do with the players or the manager who are superb people, it will be all about my personal ambition and wanting to play at the highest level I ', said Speare". He added, "Phil [Wilson] gave me a great opportunity when he signed me for Lancaster last summer. But the deciding factor will be the lure of Conference football. That really appeals to me at this stage in my career".

Stalybridge Celtic had arranged a friendly yesterday at Rossintgon Main but it was postponed due to snow.

Former Alty Youth, Stuart Cooke "pulled the ball back from the left leaving Rain to fire home past the despairing Mackin from eight yards out" for Connah's Quay Nomads against Cefn Druids in the Welsh Premier league. 22 February 2005