Goals from Lewis Chalmers and Danny Grimshaw secured a 2-1 win for the Reserves today. Report in Reserves' section.

For pictures and report link, see Saturday news (29th) below...

When we play Barrow next Saturday they are likely to include their former defender Kirk Wheeler, who has just returned from Grimsby Town to Holker Street on non-contract terms. Another returnee is striker Neil Tarrant who has been a major part of Barrow's recent revival. Gavin Knight, who broke his nose recently, nevertheless played for Barrow yesterday as did goalkeper Simon Bishop who has been out recently. But, next Saturday, The Bluebirds will be without Mark Salmon, who is working in Egypt, though Karl Colley and Graham Anthony will both be available after suspensions. Barrow Manager Lee Turnbull says of recently signed cover-keeper Jamie Waite "his chances of a future at Barrow appear slim. He's playing and training for free, but at the moment we are not in a position to offer him a deal". Alty will be without Mark Maddox who will be suspended.

Alty's mascot, Rocky Robin, will compete in the annual Football Mascots' Pancake Race at The Printworks, Withy Grove, Manchester on Sunday, 6 February at 3pm. Rocky will take on such elite opponents as Manchester United's 'Fred the Red' and Oldham's 'Chaddy the Owl'. All support for Rocky will be very welcome!

Yesterday's Robins' Review revealed that Val Owen has recently turned down a move to Conference side Tamworth.

In today's NL Paper, Ged Courtney of Runcorn selects Alty's Stuart Coburn as the keeper for his Dream Team. He describes Stuart as "a good shot-stopper with terific handling skills and a great reader of the game. Also very agile and superb at closing down a striker's shooting options". Also in Ged's eleven were two other ex-Alty players, Tim Ryan and Phil Bolland.

Accrington report that "Steve Halford has joined Droylsden on loan until the end of the season".

Moor Green's game was postponed yesterday due to the fire at the ground in midweek. This "has caused extensive damage to the main stand at the Moorlands. The fire, believed to be an arson attack, was started around 6.45pm just prior to the regular Tuesday training session. Fortunately smoke was spotted and the clubhouse and dressing rooms were evacuated immediately as within minutes the whole stand was engulfed in flames that could be seen from miles away. Four fire appliances were in attendance for several hours before the fire was extinguished, but the stand is now completely gutted and appears structurally unsafe. The dressing rooms, physio room, board room and social bars underneath the stand have also been subject to severe damage by the amount of water used by fire crew in getting the blaze under control. Fortunately, due to the speedy action in evacuating the area, no one was injured which is certainly a major blessing. At this point in time the club has been closed awaiting CID investigation and all electricity to the club has been cut off due to safety reasons".

IC Cheshire quotes "Axed Runcorn FC Halton boss Alvin McDonald last Tuesday: "At 3pm yesterday afternoon, I got a phone call off the chairman. He told me he was relieving me of my duties and when I asked why, he couldn't tell me. I said there must be a reason for it - he must have a reason or an explanation. After quite a while of not getting anywhere on that one, he said he'd decided to take the club in a different direction and that he won't be going back on his decision. That's all I know. If it is through money or financial considerations, which the chairman hasn't told me it was, he hasn't asked me would I take a pay cut or do it for nothing and just see the season out until May. That is something me and Peter would have done. I believed we were more than capable of keeping our place in Conference North and, after Saturday's performance, there was nothing to say that we wouldn't. I don't think I would have got the players to respond like they did on Saturday if they did not want to play for me... But no player has argued or moaned although they have been disappointed. I have never lost a player to a bust-up. There are 120-150 diehard, genuine Runcorn supporters of which 40-50 have travelled away from home with us. They have been absolutely superb to me and Peter from day one. They knew what we were trying to do and the circumstances we were working under. I do really appreciate everything the fans have done before and after the (chairman's) phone call yesterday and if anyone deserves things, it is them".

Alfreton Town report that "Michael Simpkins has joined the Reds from Burton Albion on a month's loan. Simpkins, 26, began his career at Chesterfield before being transferred to Cardiff City in May 2001. He has also had spells at Exeter and Cheltenham on loan before a transfer to Rochdale in July 2003. He made nearly 30 appearances for the Spotland club last season before Nigel Clough picked the tough tackling left-sided defender up. He is equally at home at full back or centre back and is reputed to be a threat at set pieces". 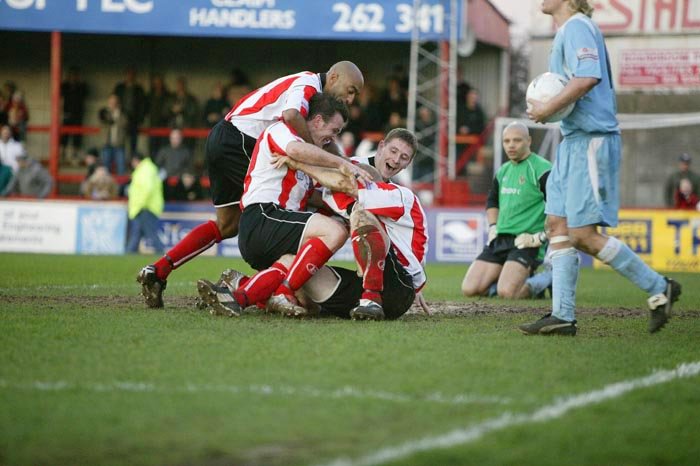 Above, Mark Maddox is smothered by his colleagues (Owen, Potts, Scott) after scoring. Photo kindly supplied by Gavin Rathbone.