WISH YOU WERE HERE? 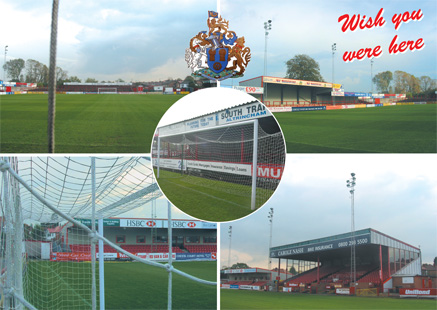 Courtesy of Bill Coop comes this preview of the new Altrincham FC postcard which will soon be on sale at the club. It features the Golf Road End in the centre, surrounded by views of the rest of the ground. 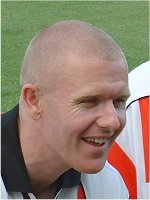 Joint editor of The Robins' Review, Terry Rowley, advises me that centre-back Mark Maddox (right) is on course to make his 300th appearance for the club against Runcorn FC Halton on 12 February. He would have reached this landmark against Barrow on 5 February, the only other senior team he has played for, had he not been suspended for that game. Of course, if the Trophy game ends in a draw, he could still make his tricentenary against the Holker Street club. Terry says that Mark will be only the 12th post-War Alty player to reach 300 games and he should pass two of the other eleven, Ronnie Ellis and Paul France, before the season ends. To date, Mark has made 279 starts and 19 sub appearances for the club, with the Lancaster game to come this Saturday before his ban starts. All Alty supporters will hope that Mark, who is 31 on 1st March, carries on towards appearance number 400 for The Robins. In addition to his wholehearted performances on the pitch, Mark has also always been popular with the fans and a keen supporter of club activities; over the years invariably one or more of the winning annual STAR/SAFE raffle tickets has been bought by Mark or his family on Merseyside.

See the Reserves section for Alty Reserves' February fixtures in the Lancashire League.

Alfreton Town's indifferent run continued as they "exited the Derbyshire Senior Cup at the semi-final stage on Tuesday evening when a lively Belper Town side won a penalty shoot-out... The major blow of the night though was the loss of full-back Ian Robinson who had to be carried off with ankle ligament damage... in front of the lowest crowd of the season in all competitions of just 171."

"Spanna" on the Moor Green Forum says that the fire last night at Moorlands left the main stand "gutted beyond repair and structurally unsafe - its basically now a metal frame. The dressing room area has been cordoned off due to the asbestos roof... There is a fair amount of water damage to the corridor leading from the bar to the toilets. The boardroom will have suffered in the same manner... Worringly though, myself and Nigel were in the boardroom and players were in the dressing room and treatment room when the fire started - however NO-ONE was injured... The youth game on Wednesday is off and Saturday's game with Stafford is certainly in doubt. No details yet regarding whether/ when the Social Club will re-open".

Bradford PA report that "Frank Thornton, Chairman for the last 7 years has announced his resignation "citing as the reasons a combination of ill health, business pressures and the sheer fact that he lives so far away in Oxfordshire... Increasingly, however, he has felt it to be in the best long-term interests of the club to have someone at the helm who lives locally and has the drive and ideas to take it forward... Thornton will remain involved with the Avenue as a Vice President. His successor is Dr John Dean", a long-time supporter and local businessman.

Harrogate Town had to replay their West Riding Cup game against Armthorpe Welfare, which they had won 10-0, after fielding an ineligible player. In the re-match they "only" won 5-0. Due to injuries and ineligibility "Before the match, acting boss Neil Aspin was even considering naming shot stopper Nick Buxton as an outfield player but ... only two substitutes could be named". The gate was just 113.

Kettering Town "gave many fringe and trial players the chance to shine" in Tuesday's GLS Cup defeat by Worksop. But, "Without doubt the player who caught most fans eye was French midfielder, Oswald Lopes".

Alty host Lancaster City on Saturday and ex-Alty man Tony Sullivan scored one of City's goals on Tuesday against Vauxhall.

The Tameside Advertiser quotes Stalybridge Celtic boss John Reed: "Usually people look at 44 points to be safe, so if we can win 10 of our remaining games that will give us 48 points and we can stay up... There were a lot of factors behind our win at Bradford not least our fans - I’ve been a manager for 28 years and I’ve never heard anything like it, they were absolutely amazing. Scott Bonsall and Barrie Keeling were amazing in midfield, Steve Smith superb on the left-hand side, Andy Hayward selfless up front and Paul Sykes immense at the back". Ashton United manager Andy Johnston added, "We’re looking at 42 points for safety... There’s been a bit of bad luck involved for us but you get to a point in a season where you can’t keep saying everything is down to that". Meanwhile Reed is "optimistic of signing Paul Shepherd from former club Harrogate. However, any plan to bring in Scott Maxfield appears more likely to happen in the summer". But Johnston said, "I’m not going to bring anyone in to make up the numbers. I know we have only got 16 or 17 players but I’m going to give them a chance". If Johnston is right, Alty need 3 more points to be sure of avoiding relegation this season!

Elsewhere in Tameside, "Droylsden chief Dave Pace hopes to have Burton Albion striker Robbie Talbot on board for Saturday’s match against Harrogate Town". Pace added, "I’m now looking at the squad and letting someone go by the end of the week". 26 January 2005

Peter Wright, recently recovered from a lay off due to a fractured eye-socket, has asked to leave Altrincham as he wishes to pursue regular first-team football elsewhere. The club is disappointed that Peter has chosen to depart so soon after being supported through his period of injury. After scoring twice on his debut in August, Peter failed to score again in a further 7 starts and 7 sub appearances.

As Alty will also be without the suspended Jozzer Mitten for five games after this Saturday, manager Graham Heathcote is stepping up his search to add to the squad though it is not necessarily in the forward division that he will be seeking to strengthen.

It has also been confirmed that Mark Maddox's suspension for five bookings will rule him out for the Trophy tie against Barrow on 5 February.

A fire yesterday evening, allegedly started deliberately, has caused major damage to the stand at Moor Green. All at Altrincham FC hope that the damage may not turn out to be as bad as it seems initially. There is a photo on the Moor Green forum.

Right: Gary Talbot, who was in outstanding form at Nuneaton.

IC Coventry says that Nuneaton "Keeper Darren Acton saved Boro from defeat at the hands of fellow promotion prospects Altrincham with a superb performance at Manor Park on Saturday. The ever-present was in superb form as he thwarted the eager visitors time and again in arguably his best display of the season as the sides battled out a dour[???] and energy-sapping encounter... But while Acton was showing his agility at one end, the Cheshire outfit's number one Stuart Coburn was no spectator, especially in the opening period as he pulled off excellent stops". Alty are described as having "a strong, no-nonsense Alty back division... [with] the outstanding Gary Talbot (right)".

Alty play their Cheshire Senior Cup semi-final next Tuesday at Vauxhall. In the other semi, last night: