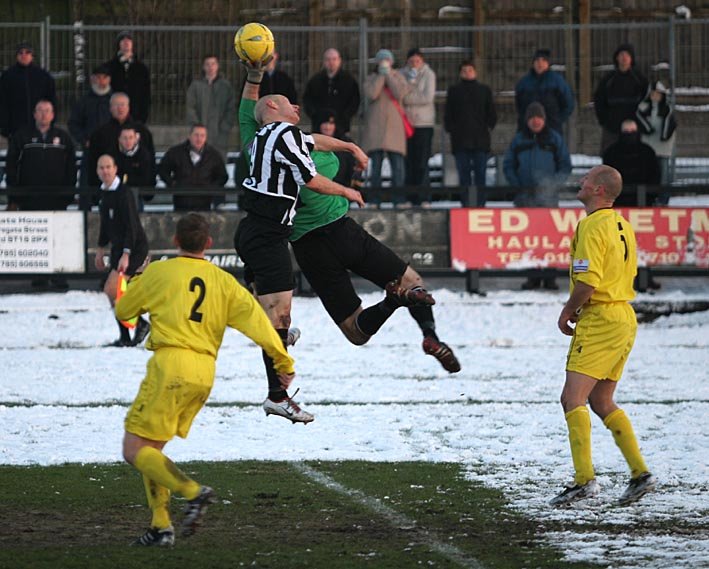 In the above action picture from the Boxing Day game, very kindly supplied by Andy Boyers, Stuart Coburn makes a fine, one-handed catch to thwart Stafford's Neil Grayson as Steve Aspinall and Gary Talbot look on.

YOUTHS IN THE PICTURE

The Youth section now has a 2004-05 team picture of Altrincham Youth, courtesy of Gavin Rathbone of GR Photography.

Alfreton report that "After having both their last two games postponed due to unfit pitches, Alfreton Town will be pulling out all the stops to try and ensure New Year’s Day’s local derby clash with Hucknall Town at the Impact Arena goes ahead.. Chairman Wayne Bradley explained: 'We don’t have the same facilities as Football League clubs when it comes to keeping the frost at bay. Whilst we couldn’t do anything about the two [away] games we didn’t play, we will be turning to our own devices. I can confirm our groundsman Matt Dawson will be putting inflatable sheets over the worst affected frost area - in front of the Tom McRoy stand - and if necessary we will also get hot air blowers in to try and help get any frozen areas thawed'... Reds' boss David Lloyd said: 'We are desperate to get some action and stop falling further behind in terms of games played'.

Runcorn FC Halton also suffered a postponement on Boxing Day, at Vauxhall, so "The club took advantage of the milder weather today and played a behind closed doors game against Capenhurst Villa, a local West Cheshire League club at their home ground. It was an opportunity for all the available players to get minutes under their belt considering the festive season and at the same time gave players looking to return from injury the chance to test their rehabilitation... The game also allowed the new incumbents, keeper Ashley Timms [ex-Alty], Tyrone Grant and Phil McDiarmid to play the whole match as did Jordan Burke [also ex-Alty]".

IC Coventry says that "Avun Jephcott could be booted out of Nuneaton Borough after admitting playing for a Sunday league team. The 21-year-old former Sky Blues striker, who signed a 12-month deal with Boro in the summer, has been suspended until further notice by manager Roger Ashby. Jephcott scored for Peugeot Hills in a Birmingham FA Sunday Vase tie just over a week ago. He originally assured Ashby he had not played but has now admitted to the breach of club discipline... The likelihood is that his contract will be ripped up and he will be asked to leave Manor Park, but Ashby and the club directors are not expected to discuss the situation until early in the New Year". Ashby added, "What hurt me was that he prefabricated a story instead of being honest and up front and admitting to what he had done... There is a possibility we will terminate his contract".

NL Daily reports that "Stocksbridge Park Steels have added to their fire power by re-signing striker Michael Blythen. Blythen, who can also play as an attacking midfield player, re-joins Steels after a very brief spell with Gainsborough Trinity".

After turning out for Northwich's Reserves against Altrincham's less than a fortnight ago, former Alty defender Jason van Blerk (36) has re-joined Colwyn Bay, reports NL Daily. He was previously with the Bay, briefly, at the end of 2003.

In Tuesday's games Ian Craney (Accrington) conceded a late penalty but Alex Hay (Rushden) and Kevin Ellison (Chester) were both on the scoresheet.

In last night's MEN, Graham Heathcote says of Boxing Day's game at Stafford, "I told the ref beforehand I thought he was making a big mistake in not postponing the match and I believe what followed proved me right because it was nothing more than a lottery".

In contrast, This is WCFC says that "Worcester City chairman Dave Boddy described the decision to postpone Boxing Day's derby fixture with Nuneaton Borough as 'shocking'... Burton referee Roy Burton called off the match 90 minutes before kick-off after deeming that two separate areas of the St George's Lane pitch near to the stand were frozen and unsafe... Boddy said: 'It was a shocking decision by the referee. Myself and Graham met at the ground at 8.30am and we both agreed that we did not need an inspection. That's a decision we made and we are both ex-class one referees...The referee was the only person that did not believe the game was playable... It has cost us £10,000. We would have got that through gate receipts, programmes and selling burgers among other things'".

The Midweek Visiter has a back page about Southport FC which largely concentrates on iys youth set up and what is claimed to be the "largest youth sponsorship in the country" by Caterforce, a corporate hospitality company which supports the Haig Avenue youth set-up.

STAR, the Altrincham supporters' trust, holds its annual prize draw on Saturday after the Stafford game, when there will also be the initial weigh-in for the 'Slim4Alty' fundraising competition. So, please return your ticket stubs as soon as possible.

In one of the few games to be played on Monday, our neighbours Trafford defeated Maine Road 4-3 at Shawe View in the NW Counties League, Division One and there were several players with Alty connections on show. Trafford's right back Simon Woodford was one of them and he laid on one of the goals. Trafford also included Andy Lundy and Liam Ralph, both of whom signed UniBond forms for Alty during our injury crisis last season. A substitute for Trafford was David Holt, who was at Moss Lane at the start of this season, whilst in the Maine Road side, also as a substitute, was Steve Howe who captained Alty's youth team three years ago and who has now played more than 100 games for Maine Road.

FROM THE OTHER SIDE

Stafford's unofficial website has a report on the Boxing Day game at Marston Road which says that "for the most part it was defences that were on top... [before] the lively Colin Little's tamely hit free-kick took a wicked deflection inside the area and rolled past keeper Tomlinson... Ultimately, Altrincham held out comfortably for the win".

The Up the Boro site also has a report which says that "Unfortunately, in a game that deserved to be a draw, Altrincham had a large slice of luck just after the hour... A free kick (which in my opinion should have been a Stafford one anyway) was looking a comfortable take for Tomlinson in the Boro' goal before clipping the heel of Wayne Daniel and finding its way into the back of the net".