Ashton United report that "At the Club’s A.G.M. on Sunday 12th December 04, it was announced that the Team Manager, Mr Gerry Quinn had left Ashton United by mutual agreement. With no win in the last eleven games and only three points from a possible twenty seven the manager's position always looked to be precarious but another defeat at Hucknall Town on Saturday 11th December finally sealed his fate with the board of Directors having to make what turned out to be a very difficult decision against a manager who has projected the club to its highest ever position within the football pyramid. Mr Quinn accepted the challenge at Hurst Cross in 1999. Since then, he has won promotion into the Unibond Premier League, landed three successive Manchester Premier Cup victories and taken the club to two other final appearances and into the newly formed Nationwide Conference North. The board of Directors have thanked Mr Quinn for his contribution over the past five years and wished him well for the future. Andy Johnston has taken temporary control of the team".

STAR, the Alty supporters' trust, is producing an Altrincham FC Greatest Moments DVD but needs pre-orders before distribution can begin. So, if you would like to have a record of Altrincham's finest hours, which includes footage of Jackie Swindells, highlights of games including the FA Cup ties against Everton, Chester, Birmingham and Tottenham, the 3-0 win over Macc. Town and the 4-1 win at Lancaster City, order your copy now. The price is £18; please e-mail STAR Marketing Director Jon Stack or telephone the club to place your order - please do NOT send any money or cheques at this stage.

Also still on sale is the much publicised STAR Calendar 2005 which is reportedly selling so well that a reprint has been ordered. See the STAR website for more details of STAR activities, including the "e-mailing Santa" and "Shop4Alty" schemes. 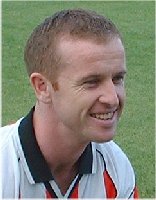 The Pink says that Graham Heathcote was "'devastated and astonished' by skipper Peter Band's defection to Northwich". Graham said, "I know he didn't take this decision lighty and he goes with our best wishes. But apart from the fact that Northwich are in Conference National, I can't see any advantage in Peter joining them... I'm not knocking Bandy because I understanbd any player wating to better himself but I'm not sure whether he has. I pride myself that,over the last two and a half years, the club has been built on loyalty, trust and honesty. But obviously that wasn't enough in this instance and the lure of Conference National foootball proved too much". Graham explained that club finances dictate that his players are non-contract and that the club is therefore vulnerable to swoops by other clubs which bring Altrincham no transfer fee.

Both Saturday's M/cr Evening News and today's Pink have substantial pieces on former Alty Youth keeper Barrie George (now at Radcliffe) as he prepares to keep goal again for the England team in the Partially-Sighted World Championships in Manchester's Velodrome this week. Barrie is the sighted goalkeeper allowed to play under competition rules. Barrie said, "With crowds of up to 3,000 anticipated for every game, I just can't wait to play in front of all those people". The final is next Saturday and tickets are obtainable free by ringing Manchester FA on 881-0299.

The Pink says that Ashton United and former Altrincham boss, Gerry Quinn, will be relieved of his duties today and that the target to succeed him is Lancaster City boss Phil Wilson. Wilson, a former Altrincham player has previously managed Ashton's Tameside neighbours Stalybridge Celtic. Ashton are in the relegation places and their league attendances are the lowest in the division. United recently jettisoned plans to join Curzon Ashton at a new purpose-built ground in Tameside. Also today, the Ashton board debates whether to change the club name to Ashton Tameside United. Quinn took over at Ashton after another ex-Alty manager John King departed in 1999.

The NL Daily says that "Stalybridge Celtic have announced the signing of experienced midfielder Paul Weller. Weller, 29, made 287 appearances for Burnley over an eleven-year period, scoring 13 goals. He has featured in Rochdale's side this season, making five appearances... and only joined Leek Town a week or so ago".

Farnborough Town are due in the High Court next Wednesday facing a winding up order". Although "It is understood that the winding up order is being dealt with and a resolution will be forthcoming next week before the Court date" it raises the question again of whether any of the National Conference's bottom teams will again be saved by another club's demise. One club which might benefit if it gets to that stage are our Cheshire neighbours Northwich Vics where "Steve Burr has raided former club Hucknall Town for the services of 25 year old winger Danny Mayman. Leaving the club is full back Dennis Pearce who has been released". Vics are also rumoured to be interested in signing Gary Ricketts from Hucknall. 11 December 2004