Manchester United Reserves' game against Wolves Reserves at Moss Lane tonight was postponed due to fog. 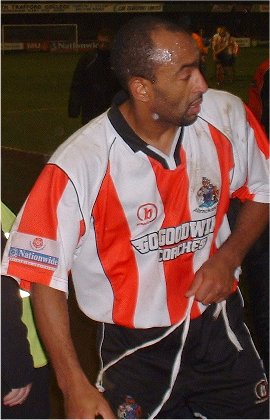 Pictured right is Alty midfielder Val Owen, as he left the pitch on Tuesday, after scoring for the second consecutive game, both goals being against Gainsborough.

Altrincham FC have welcomed a new chaplain to Moss Lane. He is Rev. Steve Cockram of Altrincham Baptist Church. Steve hails from Exeter and has played Minor Counties cricket. He moved to Altrincham in 1995.

Our opponents on Saturday, Moor Green, beat Hednesford Town 3-1 on Tuesday in the Birmingham Senior Cup. Howard Watts's Through the Years has been updated for 4 December.

Once again, Mark Eckersall will be providing live updates on Altrincham's game this Saturday via Gary Warrington's chatroom. Mark's aim is to provide team news from 2.45pm then live action details to those who cannot attend the match at Moor Green. The chatroom link is here or the service can be can be accessed through the Forum (link in top panel of this page). Access is free to all, no membership is required. Mark will also welcome comments, chat and banter from fellow supporters during the match. On its debut last week Mark's service had 29 fellow supporters joining him in the chat room.

Danny McGoona has just ended a stint as acting manager of Conwy United. Danny remains a registered player at Colwyn Bay as well, and has made two appearances on the Bay bench this season. After being on the verge of joining Colwyn Bay, Adam Farley has signed for Witton Albion instead, following his release by Droylsden. (Thanks to Andy Owens for the above information).

Harrogate, whom we meet a week on Saturday, beat Armthorpe Welfare 10 -0 in the W. Riding County Cup this week.

SANTA IS A STAR

The STAR website has details of how you can e-mail Santa and, in return, get a reply containing a free voucher for an Alty home league match. There are also gift vouchers to be won. 1 December 2004