Alty's only injury doubts for Saturday's game at Worcester are Mark Maddox and Steve Torpey. Mark trod on a ceramic tile at home, a piece of which went into his foot, whilst Steve has a hamstring problem. 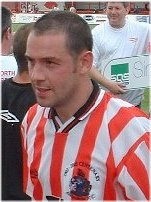 Altrincham FC have released two of their squad. They are left-sided midfielder/defender Barry Shuttleworth (27) and striker Niell Hardy (30). Both players had two spells at Moss Lane.

Barry (left) was originally signed on loan from Macclesfield and made his debut in March 2002. He started out at Bury as a trainee (1995-97) before moving on a "free" to Rotherham (97-98), Wigan Athletic & Blackpool (98-99), Stockport County (99/00) and Scarborough (00-01). He made 16 league starts (and 3 others) for Blackpool, 2 for Scarborough and 3 as a league sub for the Silkmen before joining Alty. He moved to Accrington Stanley for 2002-03 but rejoined Alty after being released and made his second Alty debut in December 2002. Injury curtailed his appearances early in 2003-04 season but after re-establishing himself in midfield, he was injured again in New Year 2004. He returned, playing at left-back for the latter part of the campaign and was in and out of the starting line-up in 04-05, a pattern not assisted by niggling injuries. Career appearances for Alty - 64(+15), 9 goals.

Niell Hardy (right) re-joined Altrincham on 16 October 2003, after being released by Radcliffe Borough. He had been a successful striker with Altrincham in the Conference, being leading scorer in 1996/97, when Alty were relegated. Niell originally joined Alty in August 1995, after two years with Northwich Victoria. He started off as a YTS Trainee at Bolton Wanderers before going to Tranmere Rovers and Crewe. In 1999, he left on a free transfer to Morecambe. Another "free" took him to Radcliffe Borough in July 2000. He then went to Bury in April 2001 and, via Radcliffe, on to Stockport County in June 2001 where he scored twice in 10 games in 2001-02. He was released from Edgeley Park in May 2002 and rejoined Radcliffe, who released him in early October 2003. Niell made his (second) Alty debut at Hucknall (18/10/03) but was blighted by injury this season. Alty career record: 150+35 apps, 66 goals.

The club wishes both players well in their future careers. Niell is now expected to join Ashton United.

Following the departures of Ged Kielty, Stuart Wright and Joey Roberts, this brings to five the number of players released in the last month who have been in the first team squad at least once this season. New arrivals have been winger Steve Torpey and midfielder Val Owen. The moves leave 17 players at Moss Lane who have made first-team appearances this season, excluding 'keepers Richard Acton (TNS) and Dave Cummins (Trafford). They are Adams, Aspinall, Band, Coburn, Hallows, Hussin, Little, Lugsden, Maddox, Owen, Potts, Rose, Scott, Talbot, Thornley, Torpey and Peter Wright. Whilst the club does not budget for a cup run, last week's exit from the FA Cup has obviously not helped it to support a larger squad. However, both released players have also had recurrent injury problems which have limited their availability. No doubt, these player movements will be one of the topics to be discussed at tomorrow night's Fans' Forum at Moss Lane (7.45.pm), which is open to all.

Kettering Today reports that Town manager Kevin Wilson "was unable to hide his fury at the match official after Darren Lynch was punched by home skipper Peter Band just seconds before the Robins levelled the scores at 2-2". He said "the fact is that Darren has been punched and everyone apart from three people saw it. If their player is sent off then the game changes completely. Instead nothing was done and for me it just shows that some referees think they are more important than the 22 players". But Wilson added, "We just can't defend and I have told them how I feel. Altrincham are unbeaten at home and you could see why. And, although some people will look at this as being a useful result, we should have come away with maximum points. "There are serious questions to be asked of the defence". The match report says Kettering "weren't helped by a referee who, in fairness, was equally bad for both sides. But the inability of the match officials to see a blatant punch on Darren Lynch by Robins captain Peter Band just before the hosts scored their first equaliser proved a pivotal point in the game". As for Town's third goal, "they again shocked the home faithful when Paterson's ball forward found Lynch who, admittedly, looked offside. But his attempted shot fell to Roberts who neatly finished".

Kettering believe that "Manager Kevin Wilson pulled off a major coup over the weekend by signing Jamie Paterson from Barrow. Paterson will be remembered well by Poppies fans over the years as more than once he proved to be a thorn in the side when playing for Halifax Town and Doncaster Rovers where he earned himself two championship winner's medals". It adds, "It was a game he knows Kettering should have won having been 2-0 up at half time and 3-2 up with five minutes to play including four minutes of injury time".

Alfreton Town's "2-0 victory over Nuneaton Borough at the Impact Arena on Tuesday evening was soured when club captain Mark Hume was stretchered off a minute before half time with double fracture of his right leg... and will probably require an operation".

Last season at Southport, Altrincham suffered a floodlight failure before the game could be played. Now Bradford PA report that the same happened to them on Tuesday: "An eventful game at Haig Avenue sees Avenue go down by a goal to nil, in a match which was reported to have been abandoned at half time, due to floodlight failure. The match was subsequently re-started after the teams warmed up a second time".

They were less lucky at Harrogate Town where "Tuesday evening's match against Stafford Rangers was called off due to a power failure, beyond the control of the club, outside the ground shortly before the scheduled kick off time".

Runcorn FC Halton report that ex-Alty striker Carl Furlong is out with a hamstring injury which he had "when he joined the club last week".

The NW Evening Mail reports on Jamie Paterson's move to Kettering, for whom he played at Moss Lane on Tuesday. "His departure is a big blow to Barrow boss Lee Turnbull, but one that was inevitable given their recent reduction in the players’ budget. He said: "The bottom line is, Kettering have doubled his wages and that may surprise a few people, but that just shows the level of wages we are paying really... Football is his sole income and Jamie has done his utmost for us". In fact, Barrow "is more than £137,000 in debt, new figures released last night show... The accounts go back 15 months and show the club in debt to the tune of £57,000 in June 2003... By June this year the debt had risen to nearly £141,000... In the three months since then the club has reduced its level of debts by around £3,000... chairman Brian Keen said: 'This is not serious at all... By the end of the season we should be looking really healthy. It’s very manageable'".

IC Cheshire says that "Vauxhall extended their unbeaten run to seven matches" against Worcester on Tuesday.

The Tameside Advertiser reports on Droylsden's draw at Moss Lane, in which "the Robins’ last gasp equaliser was turned into the net by Eddie Hussin’s hand, as the player allegedly admitted afterwards".

IC Cheshire says that "Witton do have a major problem to overcome in the Wincham Park pitch. Their game against Blyth was called off on Saturday because a 400-square-yard area at the Lostock end of the ground was flooded and refused to drain. They have experts looking at the pitch tomorrow and a blocked drain seems the likeliest fault. That may mean digging up part of the pitch and finding time between games in which to do it. Until then, in wet weather, games will continue to be in doubt for both Witton and Vics" and "Witton have tabled an offer for a striker currently with a Conference North club". 27 October 2004 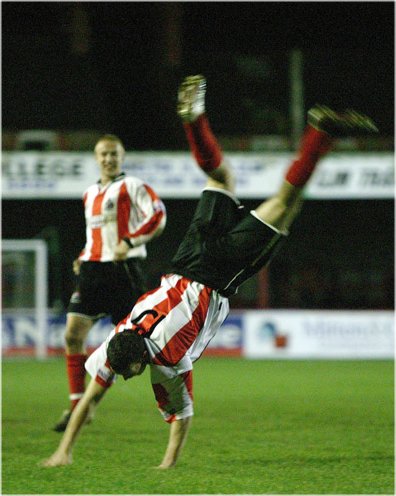 Apologies for the delay with the match report from Tuesday night; it should be here early tomorrow morning.

In Monday's FA Cup game at Leek, NL Daily reports that "With no other keeper registered to play in the tie, former Blues’ boss Wragg was forced to rely on outfield player Paul Sykes between the sticks and the visitors also went into the game with only four substitutes on the bench". Celtic lost 2-1 but Sykes played well.

Worksop Town report that they "are currently in negotiations with two Conference league players, one a 23 year old centre-back, the other being a forward... The on-line voting for the FA.com Player of the Round has controversially been awarded to the Bath City player Scott Partridge who polled 41% of the votes. Our own Chris Cleary was in second place with 23%".

What a game! Another pulsating 90 minutes at Moss Lane for the third consecutive match saw Alty come back from 0-2 at half-time in a game featuring six goals, a confrontation between the management teams and some questionable decisions from the officials. In the first half, Kettering looked the best side seen this season at Moss Lane, with the pace of Burgess, Lynch and Roberts causing problems. Lynch headed Kettering ahead after 38 minutes when Coburn came to punch but was beaten to a corner-ball. The corner had come after Adams had been left injured in the Kettering half and Roberts had advanced upfield, despite Altrincham claims of offside, to win the flag-kick. Roberts appeared to have wrapped up the game when he put Kettering two-up from close range after Lynch had won an aerial ball for him (45 mins).

But Alty got back into the game just 45 seconds after the break when Potts made himself some space on the edge of the box and shot, low into the net. Just eight minutes later Hallows levelled the score following a blocked shot from Little. Another controversial failure to give offside allowed Lynch to advance and seemingly miscue a shot, which turned into a pass for Roberts to complete the formalities of making it 3-2 to the Poppies (63 mins). With Alty's substitute debutant Val Owen playing well, Alty got their deserved equaliser when Hussin rose well to nod back Potts's freekick across goal to Thornley, who headed home (86 mins). The game ended with Alty camped in the Kettering half. Report to follow.