Altrincham have signed left-sided midfielder Steve Torpey from Prescot Cables. Steve was a schoolboy international for England and was at Liverpool Academy (1998-2001). In 2001-02 he was at Port Vale, where he made one first-team appearance. He was born in Liverpool on 16 September 1981, is 5ft 9in and weighs 10lb 8lbs.

Howard Watts's Through the Years records for 2 October are here.

Alty Reserves have taken on a few new faces recently. They include former Northwich Vics midfielder Val Owen, who is in the squad for tomorrow's game at Chorley. Joining him is Laurence Ball, who has come from Dover Athletic but is in the NW as a student. His former clubs include Chelsea and Gillingham. Two other newcomers are former Manchester City youngsters, Leyton Slack and Adam Brindle, who played for the Reserves last Saturday. A familiar face returning to the Reserves is former Alty youth captain Paul Tilley, who has been with Trafford and Leigh since leaving Altrincham.

Long-term injured first-teamers Danny Murphy and Sean Smith have been playing in the Reserves this season and both look to be getting back to good form after more than a year out of action. The Reserves gained an excellent win at Barrow last Saturday and manager Neil Brown takes them to Chorley tomorrow for another in their sequence of seven consecutive away games in the Lancashire League. For more, see the Reserves page.

The Conference site reports that "Altrincham manager Graham Heathcote takes the Nationwide North (Manager of the Month) award following a splendid month for the Cheshire side". It continues, "Graham's personal history with the club spans almost 35 years as he also played for the club as a teenager. He celebrates his second anniversary as the manager of Altrincham this month so the award comes at an appropriate juncture". 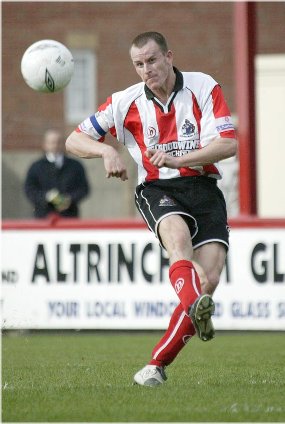 Right is Gavin Rathbone's view of Peter Band in last week's game against Nuneaton. For details of Gavin's photos, click here. Peter has retained the captaincy which he was given due to Mark Maddox's suspension at the start of the season.

There are three options for Alty next week: