Farsley Celtic, our FA Cup opponents next Saturday, continued their good form with a 4-1 win at Prescot Cables yesterday. In The Pink, Graham Heathcote says, "Thye've got some good players, especially the likes of Michael Midwood. But it's a home tie for us and, as a manager, that's all you can ask for. The FA Cup never changes. It represents a fantastic opportunity for non-league clubs to put themselves in the national spotlight and generate much needed finance. And that's what we'll be aiming to achieve".

Ex-England and Manchester United captain, Bryan Robson, will be our guest at a Sportsman’s Dinner to be held at the Cresta Court. Tickets are priced at £30 per person or £300 for a table of 10. Places are limited to 200, so don’t delay - book your tickets now.

Tickets are available from the club office at Moss Lane (tel: 928-1045) or you can e-mail Grahame Rowley, from whom further details are also available. 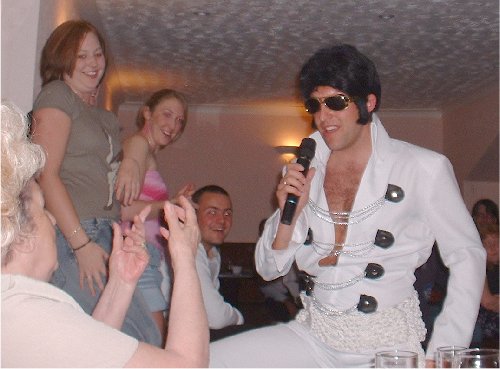 After his successful Elvis Presley tribute act (right) at Moss Lane a week ago, and goals for Alty on successive Saturdays, Marcus Hallows is featured widely in Sunday's press. Indeed, the Non-League Paper has three pictures of him - one as Elvis, two as Marcus. Marcus told the NLP, "When I retire from the game, I'd like to contact an agent about my Elvis act. I'm a big Elvis fan and I'd previously sung his songs at parties".

Contrary to reports last week, Danny McGoona is still at Conwy United where he and a fellow player have taken over the managerial reins following the death in a road accident of the Conwy manager.

Last Friday, Alfreton played Runcorn in an experiment to improve home attendances - the gate was 446, about 10% more than the average home gate to date at the Impact Arena.