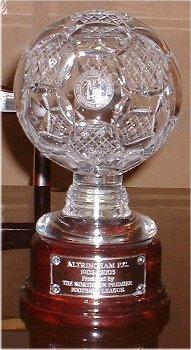 Alty's next game is a pre-season friendly away to our neighbours, Trafford, at Shawe View on Tuesday (20th) k.o.7.45pm. Directions are here.

Harrogate Town are about "to unveil two big name signings at the beginning of next month." Manager John Reed said: 'They're both with League clubs and are among four or five we are talking to'... He also confirms that striker Andy Farrell has put pen to paper, joining the club from Halifax Town".

Vauxhall Motors has a newly revamped website. Links to all Conf. North club sites, and to many more non-league football sites are here.

The Holker St Newsletter says that Barrow expect to sign Ian Kilford. "Kilford is one of three players that [Barrow boss Lee Turnbull] had been chasing recently... Turnbull was also confident of signing Bradford PA centre back James Stansfield but he has been made another offer by a fellow Nationwide Conference North team and is considering his options. The third target was defender Rob Jones of Stockport County, though it's thought that he is unlikely to sign as he's been in talks with Darlington".

"Trialist" Kevin Ellison, released by Stockport County, scored after 3 mins on Saturday as Chester City beat Walsall 3-0. "Ellison's pugnacious display can only have helped to secure him a permanent contract" says their website. Jamie Baguley, loaned to Alty last season from County, is reportedly on trial with Rochdale.

Chris Downey, who was briefly at Moss Lane last season, scored for Mossley last Saturday in a friendly against Castleton Gabriels. Downey "controlled on his chest before blasting home a stunning drive from an awkward angle ten yards out on the left... Downey again hit the woodwork before rounding off a comfortable win with his second goal. The former Bolton Wanderers' striker keeping his cool to finish well" reports the Mossley site. 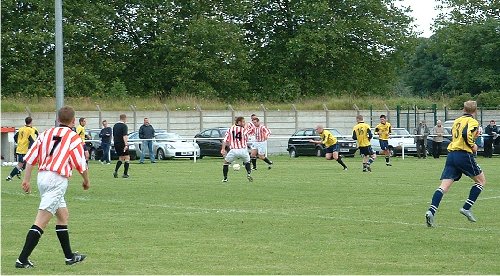 Steve Aspinall, who assumed Mark Maddox's no.7 shirt in the second half at Abbey Hey, watches as Mark Rawlinson (14) awaits the next move from Gareth Feeney (on the ball).

Alty's next game is away at Trafford FC on Tuesday. Details and directions are on the Friendlies page.

"Steve Davis, the newly-appointed manager of Nantwich Town, can't wait for the football to start as Coca-Cola League One side Oldham Athletic arrive on Saturday... Three new faces have been drafted in while [ex-Alty] Vernum Rowland and Tom Caines have followed Nigel Gleghorn to rivals Newcastle Town... 'We spoke to Vernum and we wanted to keep him here', explained Davis. 'But Nigel brought him to Nantwich and I think he felt obliged to follow'", reports This is Cheshire.

Two goals each from Kieran Lugsden, debutant Colin Little, Stuart Wright and Peter Band gave Alty a comfortable win in their first friendly of the season. Alty also missed a penalty, won and taken by Peter Wright. As well as Little and Peter Wright, other new faces for Alty included Mark Rawlinson (ex-Dorchester Town, Weymouth, Exeter City and Man. Utd) and Gareth Feeney (ex-Flixton). There were also returns for David Holt, who was loaned to us last season by Stockport County, and Jamie Almond who made one sub. appearance last season. Report and pictures to follow.

Above, Colin Little slots home goal number four, into the bottom corner of the net, from the penalty spot.

As well as Stuart Coburn, Ged Kielty and Danny Murphy who, as reported yesterday, will not be available for today's friendly at Abbey Hey, also missing from the squad will be striker Rod Thornley. Graham Heathcote has confirmed that Rod is unlikely to be fit for the start of the season following his knee operation at the back-end of last season.

Graham Heathcote recently attended the meeting of Nationwide Conference League secretaries at Burton Albion and he has kindly passed on some of the initiatives which are being adopted by the Conference.