KEEP UP THE SUPPORT!

Alty Director Grahame Rowley has advised the website that new agreements have been reached with the Customs & Excise (for VAT) and the Inland Revenue recently. Grahame says:

"The Board of Altrincham FC have now made agreements with both the Customs and Excise and the Inland Revenue with regards to the outstanding debts. The Customs and Excise have agreed to accept a payment of £750 per month and the Inland Revenue a payment of £500 per month. It is essential that we maintain these payments and do not renege on the agreements. Thus we ask everybody to support any fund raising events that the club or STAR run this season. Every penny counts and with your support these debts will soon be eradicated. The Board would like to thank everyone for the support which they have received over the last two years and now look to build on the firm foundations which have been laid".

In this connection, don't forget that you can get more STAR Grand Draw raffle tickets via the STAR website.

The NW Evening Mail says that "Barrow AFC manager Lee Turnbull has received a huge boost.. by agreeing deals with two new players. The Bluebirds boss is refusing to name the players until they put pen to paper on deals, but said one is a centre-half and the other a midfielder. Turnbull said: 'I have agreed deals with two players. One is from the same league as us and the other has just been released from a Third Division club'".

Harrogate Town report that "centre-backs Michael McNaughton and Chris Hudson, both at Harrogate Town last season, are training with Pickering Town with a view to playing this season. Another player with Town last season, Craig Mitchell, is reported to have signed for Leigh RMI. The striker had an unhappy spell at Wetherby Road, on loan from Mansfield Town".

This is Worcester says that "Worcester City's latest signing Nick Colley has set his sights on reviving his old championship-winning double act with Rob Warner. The pair played an integral part in Tamworth's 2002/03 Dr Martens Premier Division triumph, proving a potent attacking threat down the right side". Colley said, "It's going to be hard though. When you play northern teams they tend to be more physical but we've got to get the ball down and use our strengths".

Altrincham's pre-season friendlies begin next Saturday. They are all listed with dates and kick-off times here and via the Friendlies link in the red panel towards the top left of this page. Below are directions and/or maps of the away grounds to be visited. This information is repeated if you follow the above link. The details below should be accurate but no responsibility can be taken for mis-directions!

From the M60 at J24 take A57 towards Manchester. After a mile, turn left into Woodland Avenue and right again into Ryder Brow Road. Immediately under railway bridge, turn first left into Goredale Avenue. The ground has a modern club house and a small covered seating area on the opposite side of the ground. Car parking within the ground is available.

From M6 J29 follow by-pass onto London Way. At first roundabout take third exit into Brownedge Road East then take first right. Ground is on left at bottom of road. There is a small car park behind the excellent, modern club house. The ground also boasts a new stand opened two seasons ago in front of the railway line.

At M60 J2, take A560 towards Cheadle. After first main set of traffic lights take first left after shops into Park Road. Ground at end of road.

From M61 J6 follow A6 to Chorley. Pass Yarrow Bridge Hotel on Bolton Road and turn left at first lights into Pilling Lane, then first right into Ashley Street. Ground is second on left. It has a large stand and at the turnstile end of the ground is a clubhouse.

From M60 J3, follow signs to Tameside Leisure Park. Ewen Fields is behind the Leisure Pool. There is a bar and refreshment bar in the ground.

Exit M60 at J7 and follow signposts for Altrincham (A56). At first lights, turn left into Dane Road. Entrance is through Danefield Road, which is the fourth left. Dane Road Metrolink station is 5-10 minutes away.

From A6144 Carrington Lane, follow the "Flixton Mile" (B5158). Carry on past Flixton Station until the forked junction (with traffic lights and Bird in Hand pub on right) where you bear right into Flixton Road. Turn immediately right into Pennybridge Lane and car park is 100 yards on left. Ground has a snack bar and bar.

The Hucknall Forum says that "Hucknall have signed 24 year old centre-half Joe Taylor. Previously with Worksop, Tamworth and the Trophy winning Burscough team, Joe was also selected to play for British Universities at the world student games last August. It is hoped to pair Joe with his 22 year old goalkeeping brother Matt. A 7 day approach has been placed with Matlock Town".

Radcliffe Borough "manager Kevin Glendon has once again delved into the transfer book. This time bringing midfield player Scott Wilson back to the club. Wilson left the Boro after they gained promotion to the Unibond Premier League at the end of the 2002-2003 season".

Burscough "have agreed terms with Steve McNulty and he will be staying with Burscough next season. He has been taken off the transfer list". 11 July 2004 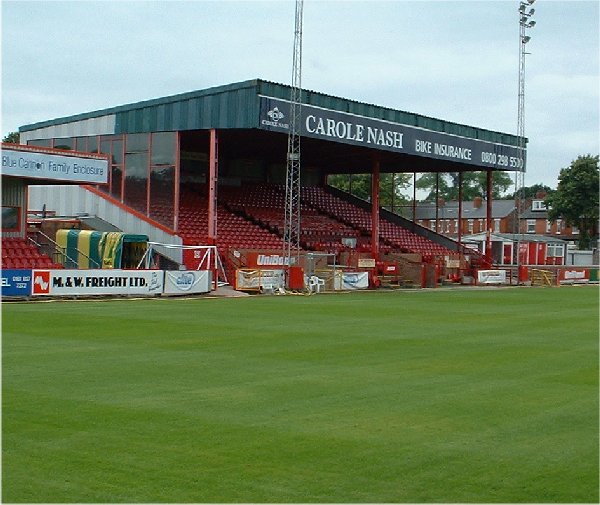 A number of supporters turned out yesterday for the first Working Weekend of the summer at Moss Lane. Their tasks included washing down all the barriers at the 20/20 End, clearing away tarpaulins, cleaning the disabled spectators' shelter and sweeping the terraces and turnstiles. Plenty of work remains to be done, including painting the crush barriers on the terraces and cleaning the main stand so, if you can, please come down to Moss Lane from 10am onwards tomorrow and/or, next weekend on both Saturday and Sunday.

Above, a picture taken yesterday shows how well the grass is now growing at Moss Lane after the levelling of the pitch and its complete re-seeding. Groundsman Peter Barry is pleased with progress and is continuing to cut the grass at regular intervals to help build up its strength. Alty's players had another training session yesterday. Two players who did not take part in the main squad training were new signing Eddie Hussin (right), from Marine, and striker Rod Thornley, recently returned from Portugal where he acted as masseur to Sven-Goran Eriksson's England team. However, neither Eddie nor Rod escaped lightly as they each attempt to recover their fitness after knee operations over the summer. Eddie went through a gruelling solitary exercise regime in the Moss Lane training area whilst Rod completed a run. Eddie hopes to be back in full training in the next fortnight but Rod was a little less optimistic of his chances of being fit for the start of the season. Alty's first pre-season friendly is next Saturday (17th) at Abbey Hey (Goredale Avenue, Gorton), kick-off is at 3pm.

The NL Paper today reveals that during Euro 2004 "Masseur Rod Thornley came out on top of the England squad's Portuguese Play Station league. Altrincham fans will be hoping that the man who doubles up as their star striker proves as prolific among the less exalted company of Conference North footballers next term".

Blackpool have signed former Alty winger, Paul Edwards, from Wrexham whilst Colin Alcide has joined Ken McKenna's TNS. Ian Craney made his Accrington debut yesterday in a friendly defeat by Burnley. The NLP has a piece on Nigel Gleghorn as he continues to turn out in Masters' football tournaments at the age of 42.

"Salford City hope to put a rocky twelve months behind them with the appointment of new manager Darren Lyons. Former Bury [and Alty] player Lyons, 37, will take charge of the [NW Counties] Division One side following the resignation of Mark Molyneaux... Salford will hope Lyons, who joins from Manchester League’s East Manchester, can bring some stability to the club" reports the Salford Advertiser.