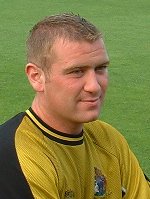 Alty keeper Richard Acton is visiting hospital tomorrow to discover the full extent of his injury but with ligament damage diagnosed in addition to a possible shoulder fracture, he will certainly be out for many weeks.

In a game marred by a serious injury to goalkeeper Richard Acton, Alty lost despite a strong second-half performance.

Above: Chris Adams dons a green jersey as Richard Acton receives treatment surrounded by his team-mates. Right: A rather grainy shot of Richard Acton as he falls, injured; his assailant, Harrogate's Smith, is masked by Gary Talbot. Below: Ian Craney (8) curls a second-half effort just over the top as the Alty fans, with their new flag, look on and, lower down, Town's Ord shapes to score but his bandaged left leg gave way as he tried to do so and he had to be stretchered off. Both he and Acton were taken by ambulance to hospital at half-time.

In the Pink, Graham Heathcote tips Southport as championship material in the UniBond Premier. Graham added "Us drawing our first three games had left me feeling frustrated, although our opening point at Alfreton is looking better and better in the light of their results since then". We're disappointed we didn't win either of our first two home games but we ought to have done, based on the number of chances we created". The article adds that Mark Maddox is now expected to be out for 6 to 8 weeks.

Carl Furlong is to be fined by Droylsden for failing to turn up to play Altrincham last Monday. Paul Ellender (Boston), Mark Quayle (Scarborough), Chris Timons (Gainsboro'), Andy Lovelock (Solihull) all scored yesterday. David Wills played for Congleton Town and Kevin Ellison played most of the game for Stockport County. Danny Adams played for Macclesfield. Nathan Comley-Excell set up a goal for Salford City, for whom Matt Duffy was sent off. Former Youth striker Rico Richards netted from Gareth Strange's cross for Trafford and Wes Wilkinson converted a penalty for Nantwich. Ex-Alty Youth captain, Steve Howe, was sent off for Maine Road in the FA Cup. John Davison is being linked with Witton's managerial post. Stuart Coburn and Ged Kielty again played for Leigh RMI. Steve Hawes played for Worksop but Neill Hardy and Dickie Landon were only subs for Radcliffe.

Gainsborough, our opponents next Saturday, have signed a cover-keeper, Paul Norton (33) as well as Chris Adam (20). Lincoln Adams, formerly at Emley, has joined Ashton United. 30 August 2003