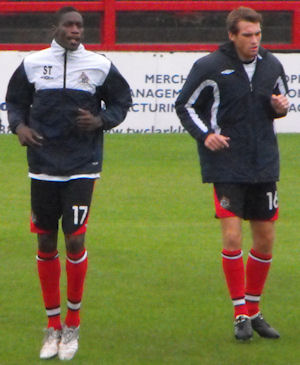 Altrincham recovered from two goals down after 22 minutes, and the stretchering off of striker Michael Twiss, to lead 3-2 by the interval. With numerous trialists used in the second half, they could have added to their lead, but were unable to do so. Tranmere fielded a young side, with their first-team on duty tomorrow at Shrewsbury, but it took them only 6 minutes to take the lead. The impressive midfielder, Fraughan, played in Steve Connor who fired home. Despite playing some good football, Altrincham found themselves further behind when a corner from the right evaded Saunders and fell for Bakayogo to put into an empty net.

Alty pulled a goal back after 30 minutes when a Nowland cross from the right was bundled into the net at the back post with what looked like a combination of chest and arm by Marc Joseph. Johnson made it 2-2 in the 36th minute after keeper Collister was unable to hold Reeves's smart shot. And just two minutes later, Reeves himself scored from close range after a good move had culminated in Clee's feed being poked towards Johnson by Nowland.

Right: Cissoko (left) and Holsgrove are seen warming up before the game.